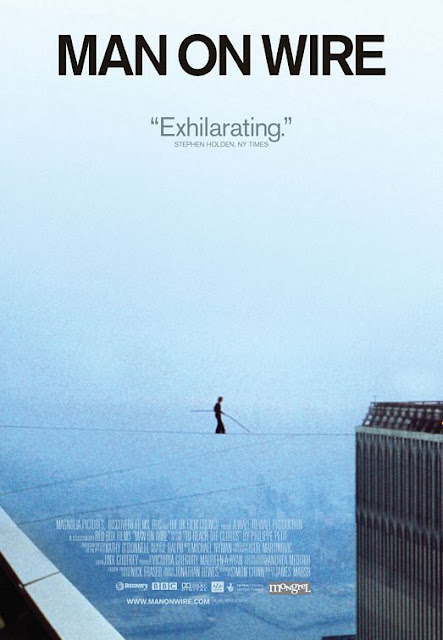 As Tangled once thoughtfully pointed out, everybody's got a dream. But few have a dream as audacious as Philippe Petit. This French tightrope walker used his skills to walk across all kinds of landmarks around the world to bring a sense of joy and wonder to the masses. Come the 1970s, he had his sights set on his next feat of tightrope-walking which would also bring his ultimate dream to life. Petit was determined to use a tightrope to walk across the two towers of the then-recently installed World Trade Center. It sounded like utter lunacy and it still does. But it happened. Petit pulled this stunt off. And the documentary Man on Wire, hailing from director James Marsh, is here to interview Petit and the other participants in this mad stunt on how exactly they pulled this off.


What's important to note right away is that there really isn't a grand purpose behind Petit's feats of spectacular tightrope walking. There isn't a tragic backstory that led him to this profession nor is there some grand design for why he chose the location of the World Trade Center as a place for him to walk across. He just saw that the building was being constructed in the newspaper one day and became fixated on the property from there. Towards the end of the movie, Petit practically revels in the lack of deeper meaning behind his stunt by noting how it was "very American" for New York City reporters to hound him for some grand purpose behind him walking across the Twin Towers rather than just appreciating the fact that such an event occurred at all.

This means Marsh's documentary is less concerned with the "why" behind Petit's accomplishment than he is with the "how". The framing device of Man on Wire sees Petit and the other people involved in his Twin Towers tightrope walk recounting for the audience how exactly they snuck into each of the towers in World Trade Center (the group broke into two smaller groups). Fake ID cards, crutches and an extensive stay underneath a tarp all played into Petit and company being able to sneak into the location during the night and set everything up for Petit's plan. The way it's told and presented in the movie makes it sound like the greatest heist movie that actually happened in real life!

Within the framing device are anecdotes about Petit's preparations for the event back home in France. It's in these stories from Petit's accomplices that something interesting emerges in how people talk about Petit, specifically, they talk about him less in a reverent fashion and more like he was just a normal guy. Petit was clever, crafty and endearingly bold but it's also clear he was also capable of being overbearing in the planning stage of these big stunts. There's a nuanced approach in both how these interviews and Man on Wire as a movie considers Philippe Petit as a person that helps render him as someone who was discernably human, even if he was capable of conquering heights in a way I can only imagine.

Petit himself gets interviewed the most in the feature and he makes for a great figure to listen to, three decades after he pulled off this tightrope walk, he talks about it with such enthusiasm that you would think he just pulled it off an hour ago! Petit only needs minimal visual aids when he recounts tales of his past, he's already plenty engaging on his own! It isn't just interviews that get utilized in Man on Wire, though, we also get plenty of archival footage, including a number of scenes comprised of home video footage of Petit practicing his tightrope walking in his own backyard in France. It's a wonder that such off-the-cuff footage was preserved at all, let alone in a decent enough fashion to be presentable in a documentary film, but thank heavens it was.

Like the more complex interviews with Petit's accomplices, this home video footage helps to cement Petit as a normal person (albeit one with incredible balancing skills!) who, like anyone else, must take time to hone his craft. On the opposite side of the equation, on-screen photos depicting Petit on his tightrope walking between the Twin Towers are utterly stunning, even looking at the photos with your two eyes, you can't believe this actually happened! Petit was right to not assign any greater meaning to this feat. Who needs deeper subtext when this kind of spectacle is so utterly awe-inspiring? It's all the more impressive to consider thanks to how well Man on Wire fleshes out the people behind this wondrous accomplishment.
Posted by Douglas Laman (NerdInTheBasement) at 1:33 PM