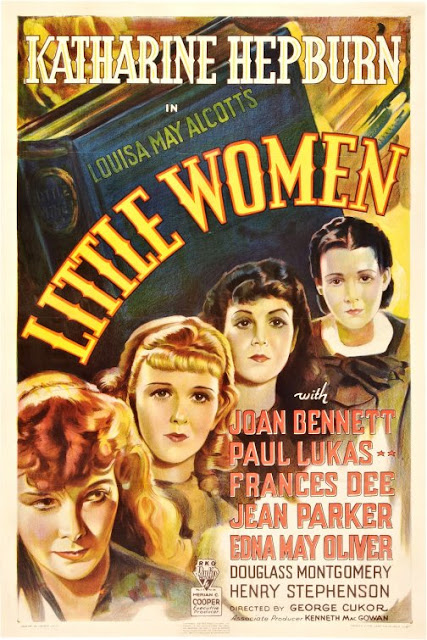 Louisa May Alcott’s book Little Women proved to be such an enduring literary phenomenon once it was published at the end of the 1860s that it was inevitable the artform of cinema, as it got underway in the dawn of the 20th century, would attempt to tackle it. Hollywood loved to make movies out of beloved source material as much in 1919 as they do in 2019! Two silent movie takes on the material had emerged before the 1920s had even finished but the most expansive adaptation of Little Women yet would come about in 1933 courtesy of director George Cukor, who assembled a stellar cast to bring this text to life.

This specific movie version of Little Women, like its source material, follows the four March sisters, Jo (Katharine Hepburn), Amy (Joan Bennett),  Meg (Francis Dee) and Beth (Jean Parker) who live with their mother, Marmee (Spring Byington), during the 1860s. It’s a time of all kinds of change and uncertainty for these characters, especially since the March father is away as a colonel in the Civil War. But over the course of this feature, they all still manage to face their individual adversities, which include Jo's potentially romantic feelings for next-door neighbor Laurie (Douglass Montgomery), and eventually grow up into....Little Women.

David Hampstead’s screenplay adaptation of this widely-revered text finds its most charming moments in just the interactions between the four March sisters. The realistic rapport between these siblings is a big reason, in my estimation, as to why the book continues to resonate with readers 150 years later. That element of the production is translated into cinematic form with entertaining results thanks to how the four lead actors have believable chemistry with each other. When Hepburn and Dee trade barbs with each other, they totally sell the idea of these four being siblings who know each other inside and out.

Even better, the primary performers are all-around exceptional. Whether they’re interacting with one another or just on their own, nicely execute the individual personalities of each March sister. Pairing up Hepburn’s brilliant on-screen persona with the character of Jo is Robert Downey Jr. as Tony Stark levels of a perfect merging of a performer and a fictional character. Meanwhile, Jean Parker is utterly wonderful as the kindly soft-spoken Beth, she gives such an endearing performance that her later scenes showing Beth bedridden with a life-threatening disease are especially nerve-wracking to watch.

As for the overall movie this quartet performances inhabit, it proves to be a mighty charming production, though it’s probably the weakest Cukor/Hepburn collaboration I’ve seen. This doesn’t make it a bad film at all, but its better qualities are its more subdued traits. Cukor’s Little Women leans heavily on grandiose emotional moments that are so upfront in their poignancy, right down to a reliance on close-up shots accompanied by heartstring-pulling orchestral music, that they end up being schmaltzy rather than moving. By contrast, the natural chemistry between the four leads are quietly moving just because of how effectively they conjure up a wistful quality in echoing authentic sibling dynamics.

A number of emotional moments that could have made better use of restraint can’t stifle the numerous better traits of this version of Little Women, which proves to be a quintessential example of an amiable watch. As said earlier, the performances are all-around grand, Cukor’s directing is solid and the period era costumes are utterly spectacular in execution. It’s not an ideal adaptation of one of my all-time favorite books nor is it the best project that emerged from one of the greatest recurring actor/director collaborations of the 1930s, but George Cukor’s Little Women still makes for a fine watch to whet our appetite while we all wait to see what Greta Gerwig is planning to do with this material come this Christmas!

P.S. The below shot from Little Women presumably was presumably supposed to include a moment where the snowman announces “Mrs. March. You could have saved the Little Women. I gave you all the clues!” 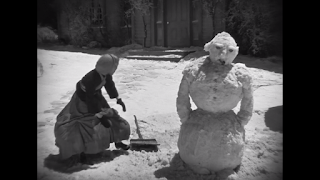