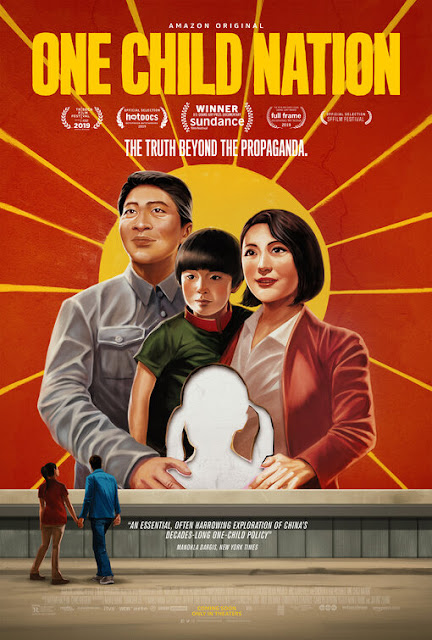 For people like myself who were only vaguely aware of China's One-Child Policy that was implemented in the country from 1979 to 2015, the new documentary One Child Nation will prove to be highly informative and fascinating experience. Directed by Nanfu Wang and Jialing Zhang, the feature follows Wang returning to her home country of China to uncover more answers regarding this policy. Now that she's a mother herself, the idea of living in a country where the Government controls how many kids you can and cannot have is one that unnerves her. At first interviewing her relatives and individuals tasked with implementing this policy, Wang and Zhang's documentary gradually uncovers a whole slew of deeper sinister conspiracies within this policy in a timely tale of the human cost of dangerous blinding loyalty to nationalism.

It cannot be stated enough how important Nanfu Wang's role as a protagonist in One Child Nation is to making the whole documentary so interesting. Wang kicks off the film with voice-over narration that immediately establishes the human cost of this One-Child Policy and its ripple effects. Maybe you're not familiar with this policy and what impact it had on people but from the get-go, Wang's highly personal presence in the film ensures there's such compelling humanity in this production that you will be emotionally engaged in finding out more about this One-Child Policy. In later sequences, Wang's presence in the film also works as a point-of-view character for audiences not familiar with the One-Child Policy.

As she keeps on unearthing new layers of corruption nestled within an already troublesome mandate, her shock over these horrors mirrors the viewers own emotions. Those expecting One Child Nation to be one of those documentaries that's basically just a dry PowerPoint lecture can relax, Nanfu Wang lays bare her own personal connection to this policy in such a transfixing manner that there's constantly a beating heart to the informative proceedings. Interview segments conducted by her and Jialing Zhang are similarly well-done, they're especially good at coaxing more hesitant interview subjects (chiefly Wang's family) into giving out truly shocking information regarding how they disposed of forbidden extra siblings.


The casual nature in which these individuals talk about just abandoning children at a marketplace or even on a hill is truly unnerving. Equally chilling is photos of signage that was spread nearby Wang's childhood home declaring ominous statements like "You can't hide that [pregnancy] for long!" as well as government-mandated propaganda made to paint a positive picture of this One-Child policy. We actually get to see a fair amount of this propaganda which is at once both perturbing and darkly humorous. How else to describe a propaganda video centered exclusively on the sight of a small child sternly talking about the harsh violent repercussions in store for those who break the One-Child Policy?

It isn't just propaganda that gets highlighted in One Child Nation, the spotlight also gets shined on a whole slew of human beings who were pervasively impacted by this policy. Wang and Zhang's focus in this feature eventually expands to also include impoverished families who actually had children ripped out of their arms and shady practices in how Chinese orphans were given to American families. Much like last years Three Identical Strangers, One Child Nation is a documentary that also functions as a riveting thriller in the way it keeps peeling back layer after layer of unexpected corruption hiding in plain sight. The fact that Wang and Zhang take time for intimate interviews with the people most impacted by these revelations make such real-life plot twists all the more powerful to watch unfold.

As Wang notes in closing narration, China has now ended the One-Child Policy and has now basically brushed the era of families being permitted just one offspring under the rug. Now all of that omnipresent propaganda has shifted over to extolling the virtues of the Chinese government for allowing people to now have multiple kids. All of those happy singing faces totally ignore all the lives impacted by previous policies documented in extensive detail in One Child Nation, a feature film that Wang, as stated in her own narration, hopes will help people to remember the actual past instead of the inaccurate picture of the One-Child Policy this propaganda wants to craft. This noble goal has resulted in an extremely well-crafted documentary that proves to be as informative as it is appropriately upsetting.
Posted by Douglas Laman (NerdInTheBasement) at 8:00 AM