Wild Rose Is So Good It'll Lead Even The Most Cynical Viewers To Bellow "Yee-Haw!" 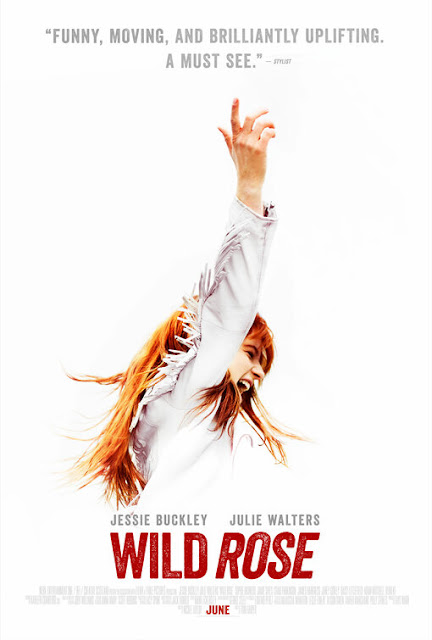 The best country music, like the best music in any genre really, tends to tap into some sort of relatable human emotion. Dolly Parton's Jolene, for instance, captures a sense of romantic vulnerability that we've all experienced at one time or another while Johnny Cash's I Walk the Line encapsulates the personal sacrifices we make for the ones we love. In these tunes and so many others, the genre of country music is used as a way to remind listeners that they aren't the only ones feeling heartbreak, joy, confusion or so many other emotions. Those classic country tunes would certainly be proud of the 2019 movie Wild Rose, specifically the way it uses the story of an aspiring singer for something that channels experiences and emotions straight out of reality.


Rose-Lynn Harlan (Jessie Buckley) is the lead character of Wild Rose and she's a young woman living in Glasgow, Scotland who aspires to be a country singer. She's also just gotten out of a year-long prison sentence. Fresh out of the slammer, she's now got to contend with her dubious mother Marion (Julie Walters) as well as her very own house to raise her two kids in. Rose is struggling to juggle both her career ambitions and her responsibilities both as a recently released prisoner (she's got an ankle bracelet to wear that ensures she's always home by 7:00 PM) and as a mom. Working as a cleaner for wealthy Sussanah (Sophie Okonedo) could help lead her closer to her dreams than ever before but chasing those career opportunities while also taking care of her homelife is proving to be nearly impossible.

Movies about people from small-towns looking to make it big as singers are pretty common but ones that tackle that story like Wild Rose, those are far less common. Whereas typical versions of these tales (like this year's underwhelming Teen Spirit) tend to fixate their plot heavily on what happens when fame goes to a person's head, Nicole Taylor's script is a much more intimate and grounded affair. Every step of Rose's journey is littered with trouble, she loses important luggage on a train ride, she can barely make it home in time for her parole-mandated curfew, she struggles to connect with her kids. Forget dealing with the problem of having too much fame, just getting through a day intact is enough of a problem for Rose.

This allows Wild Rose to carve out its own distinct identity as an inspirational music drama and, like The Farewell (a movie I saw in a double bill with Wild Rose, which made for an outstanding day for cinema), get some heavily poignant moments out of the little things, like seeing Rose clean up her kitchen or make headway with her children. This approach also works out wonderfully for making its lead character an individual you can become emotionally invested in. Out of context, Rose-Lynn Harlan sounds like a caricature who could be the lovechild of Ally and Groundskeeper Wllie. To be sure, she's got some delightfully pronounced parts of her personality, like her wonderfully unsubtle Southern wardrobe complete with white cowboy boots or her insistence on correcting people that she works in Country music, NOT Country/Western music like Captain Jack Sparrow making a point to emphasis the Captain in his name.

But Wild Rose knows how important it is for this character to not just be a collection of eccentric qualities and along with those entertaining traits of her comes numerous sequences that actually explore Rose as a human being you can root for, identify with and become engrossed in. This achievement is already on display in an early sequence showing Rose vacuuming around Susannah's house while listening to her music. She gets more and more into the tune, members of the band she performs with begin to play around her in corners of the house. Director Tom Harper realizes this moment in a visually inventive sequence that makes one thing clear above all else: you can take Rose out of performing, but you can't take performing out of Rose.

Later depictions of Rose struggling to be an attentive mother or grappling with the secrets she conceals from Sussanah explore this protagonists plight in a similarly emotionally stimulating way. Wild Rose doesn't shy away from showing Rose being pulled between the obligations of adulthood and the obligations of chasing your dreams in a way that rings ever so true to reality. Realism is further reinforced by Jessie Buckley's marvelous lead performance, another aspect of the production that ensures Rose always stands out as a person rather than a stereotype. Buckley is an absolute hoot portraying Rose as a firecracker who cannot be tamed, even in a courtroom she's not gonna rein in her colorful personality and thank God for that since she's such an entertaining character to watch!

Buckley's also successful as a performer in making the more poignant parts of Rose's journey as emotionally stirring as they are. As for Buckley's voice, well, it's honestly awe-inspiring when you first hear her sing. She's got a magnificent voice full of emotional power that sends chills up your spine, it's such a tremendous voice that you totally understand why Rose would so fervently pursue her dreams of chasing her country music dreams in Nashville, Tennessee. Her journey pursuing those ambitions is one riddled with nuance, great direction from Tom Harper (lots of great uses of God's-eye-view shots in this movie) and extremely moving tear-jerker moments. Wild Rose beautifully carries on the tradition of classic country music in using art to embody relatable human experiences and that achievement, as well as the excellent film as a whole, get a mighty hearty "Yee-Haw" from me!
Posted by Douglas Laman (NerdInTheBasement) at 1:39 PM