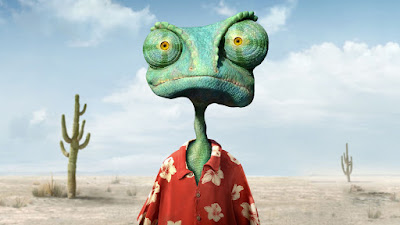 When I was a child, me and my family went on a vacation that saw us all staying at this little house on the beach. In the house, there was a television accompanied by a VHS player and two VHS tapes. One of those tapes for Mouse Hunt, a movie whose cover featuring a perplexed Nathan Lane and a cute mouse immediately garnered my attention. Five minutes into the film and a scene where a character chokes to death disturbed me so greatly that we had to turn off the movie and find some other way to amuse myself. Like many movies (E.T. especially) that traumatized me as a child, I have a newfound appreciation for Mouse Hunt as an adult, particularly in how it set the stage for how director Gore Verbinski would incorporate the macabre into seemingly pedestrian mainstream feature films.

Verbinski was originally a music video and commercial director whose profile increased immensely when he directed the famous Budweiser Frogs commercial. For his feature film, he helmed Mouse Hunt, an early project from then-newbie studio DreamWorks that was clearly made to be one of a number of Home Alone knock-off's that emerged in the 1990s. But with this film, Verbinski established that when you hire him to do a mainstream project, he's gonna deliver something bursting at the seams with eccentric gruesomeness. Thus, Mouse Hunt got released with all kinds of dark humor, on-screen deaths and Christopher Walken in full-on Christopher Walken mode in a supporting performance as a sadistic exterminator.

Mouse Hunt was a financial success and saw Verbinski continuing to direct mid-budget fare at DreamWorks before hopping over to Disney to direct their first-ever* PG-13 tentpole, Pirates of the Carribean: The Curse of the Black Pearl. Verbinski being at the helm of the ship ensured that this would not be as forgettable of a production as past movies based on Disney theme park rides like The Country Bears**. There are so many different elements in this original Pirates movie that helped cement it as an all-time classic but Verbinski's commitment to the stories campfire fire tale level of darkness was a big reason why it was such a distinctive creation. The nefarious skeleton army of Barbossa was capable of delivering some truly gruesome imagery and menace in the confines of a PG-13 adaptation of a Disneyland property.

Verbinski's subsequent Pirates movies only got more and more macabre, with Dead Man's Chest especially going whole-hog on moments like Johnny Depp as Jack Sparrow nibbling on a toe or a crow plucking the eye out of an imprisoned pirate. These nasty moments echo the works of Ruggero Deodato more than they do the works of Charles Baton and such a streak continued on even when Verbinski left the Pirates series to go do his first PG-rated film since Mouse Hunt. That feature was Rango and though it was a star-studded computer-animated movie starring talking animals, its dark streak ensured its creative sensibilities were as far from, say, the Despicable Me movies as you could get. These Western animals swear, drink, smoke and use actual bullets in fighting with each other, nothing in here feels it's been sanitized just to satisfy the concerns of stockholders.

In these works of Gore Verbinski, it truly feels like Verbinski has an infectious sense of glee in sneaking in all these gruesome elements into movies that normally avoid such content like he's a student scribbling some profane word on the teacher's dry board. So many of these blockbusters tend to run stale and safe that even Verbinski movies that have more flawed scripts like Dead Man's Chest and At World's End tend to be overall solid thanks to their enjoyable ambition in constantly sneaking in brazenly adult content into crowdpleaser blockbusters. Plus, his blockbuster movies tend to have an oddly light-hearted tone overall that helps ensure the proceedings don't become gratingly edgy. The pervasively gloomy At World's End, for instance, halts its climax so that Jack Sparrow and Davy Jones can engage in a brief reprisal of the Marx Brothers Mirror Gag around the device that summons the Kraken.

It's a gag that echoes Looney Tunes more than anything else and it's not the only time the influence of those particular cartoons, as well as classic silent comedies from Charlie Chaplin or Harold Lloyd, are felt in his works. Clearly, there's a large array of seemingly contradictory creative influences in the majority of Verbinski's works that one can appreciate all the more after watching his weakest movie, The Lone Ranger. This 2013 feature is shockingly lacking in creativity for a Verbinski movie as Johnny Depp does his umpteenth Jack Sparrow knock-off, primary themes of the story feel like rehashed material from Rango and aside from the sight of William Fichtner devouring somebody's heart, there's shockingly little in the way of boldly dark content to be found here. Yes, the one train sequence in the climax is cool, but you have to sit through so much boring storytelling to get there.

Whereas other Verbinski works use smatterings of gruesomeness to help set a specific tone or style, The Lone Ranger is the closest I've seen Verbinski on autopilot as he seems to just be trying to replicate the Pirates of the Caribbean formula again to significantly underwhelming results. Like I said, though, at least The Lone Ranger lets you appreciate the boldly and creatively gruesome factors that make the best Verbinski movies like The Curse of Black Pearl and Rango as good as they are. I'd love to see him return to the blockbuster cinema realm again, even if such a return would have seen him direct that Gambit movie he was once attached to helm. Would Verbinki's Gambit movie have had Channing Tatum using playing cards to slice off peoples heads or something else similarly icky? Such a suggestion would sound like lunacy with most other filmmakers, but it feels reasonable to ask for a Gore Verbinski movie, you truly never know what lies in store with those movies!

** Any mention of The Country Bears is legally required to be accompanied by a clip of the one brilliant moment of the whole movie:

Posted by Douglas Laman (NerdInTheBasement) at 11:49 AM