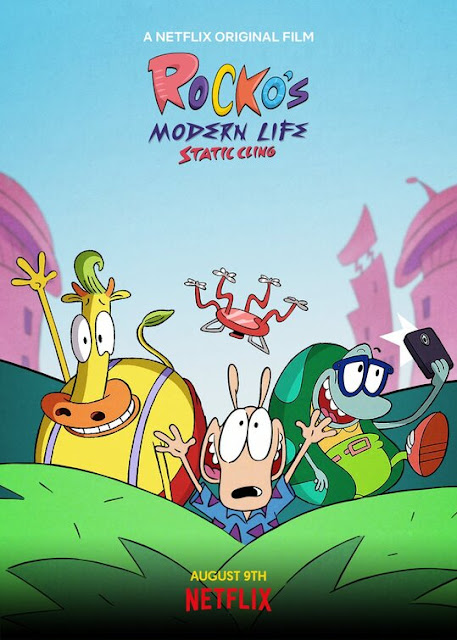 Holy heck, Rocko's Modern Life is back! That beloved animated cartoon that aired on Nickelodeon in the 1990s has returned for a 45-minute special entitled Static Cling that, after being put on a shelf for multiple years, finally debuted on Netflix yesterday. Like many classic Nickelodeon projects, the original Rocko cartoon was widely praised for how it managed to resonate just as much with adults as it did with kids, the plights of Rocko and pals typically involved filtering mundane parts of circa. 1990s adulthood life, such as doing laundry, through a highly wacky cartoony visual sensibility. Such a balance is maintained for Static Cling under the direction of Cosmo Serguson and original show creator Joe Murray.


Static Cling kicks off with wallaby Rocko (Carlos Alazraqui) and his pals Heffer (Tom Kenny) and Filburt (Mr. Lawrence) having spent 20 years in outer space. Abruptly returning back to their home of O-Town, they get to discover the modern world and all of its social media, cell phones and virtual reality for the first time. Looking for a fixed point of consistency amidst all this newness, Rocko clings to the hope of watching his favorite TV show, The Fatheads, only to discover that it's been pulled off the air. Desperate to get his program back, an achievement that would save the job of Rocko's neighbor Ed Bighead (Charlie Adler), Rocko sets on a quest to track down the shows creator, Ralph (Joe Murray), the long-missing offspring of Ed.

Static Cling see's Rocko's Modern Life's writing and humor style basically picking up like no time has passed at all since the show went off the air. Once again, the storylines can resonate with older viewers while delivering enough slapstick and humorous animation that can appeal to younger audiences with ease. Nicely, this consistency with the original seasons of the Rocko's Modern Life TV show allows it to turn in a solid exploration of the importance of embracing change. For Rocko, this eventually manifests in him learning to accept potential changes in a new version of The Fatheads, a timely message in an era where older fans get up in arms on new characters being added to the Ghostbusters and Star Wars mythos.

For Ed Bighead, learning the importance of change comes in the form of him learning to embrace his child who is now his daughter Rachel. It's thoroughly impressive how Rocko's Modern Life, a show where every instance of a character hitting the ground on their bottom is accompanied by a fart noise, is actually able to pull off such a touching storyline involve a Transgender character, a pivotal moment with Rocko, Heffer and Filburt first seeing Rachel and immediately accepting her is especially poignant. Better yet, the storyline makes sure to emphasize Rachel's own perspective instead just having her being a prop for the growth of her unaccepting father and the character becomes a great way to explore how important change is in the world.

It's nice to see Static Cling, which even Joe Murray would likely admit could easily have just been a shallow nostalgia cashgrab, not only explore the importance of change in the modern world but do so in such an emotionally affecting manner. It's also delightful to see that the show has fully embraced hand-drawn animation even in the year 2019, I don't think I spotted even a hint of CGI enhancements (save for one brief segment intentionally skewering lifeless examples of computer animation) in the hand-drawn animation. Aside from some occasionally stilted pieces of movement from the characters, the animation of Static Cling is thoroughly delightful in how thoroughly it embraces a cartoony visual sensibility. The characters of Rocko, Heffer and Filburt, like in the original show, get to be elastic hand-drawn creations whose bodies are so flexible that they're one shocking event away from collapsing into pieces.

Meanwhile, background items are rarely drawn with straight lines, usually everything from lamps to filing cabinets are drawn with a crooked slant. Even everyday objects in an office space are wacky in the animation style of Rocko's Modern Life! The visuals alone provide a lot of the amusement in Static Cling, though plenty examples of the darker and/or adult-skewing humor that was such a key part of the original Rocko's Modern Life program still crop up to generate laughs here, including the return of the restaurant name Chokey Chicken. I'm not sure Static Cling is going to work perfectly for newcomers to the Rocko universe since its storyline and bevy of references to gags from the original show (hey, someone's singing a Zanzibar musical number!) seem innately designed for longtime fans of the series rather than something like The Simpsons Movie which was made to work for audiences unfamiliar with the source material. Clearly, though, I had a ball with Static Cling and if you're at all a fan of the original Rocko program, then Static Cling will make you laugh even on the most dangerous of days.
Posted by Douglas Laman (NerdInTheBasement) at 10:53 AM