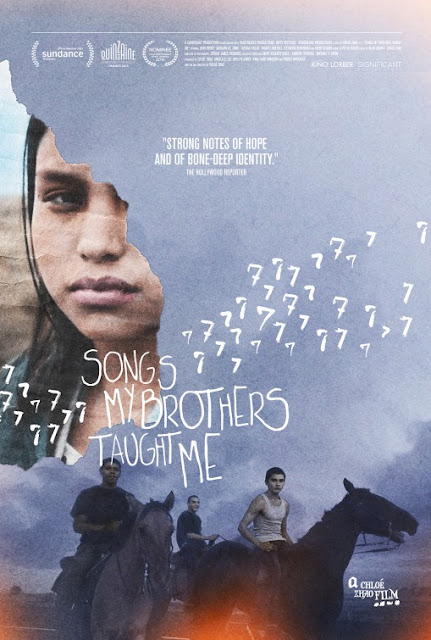 Right now in London, director Chloe Zhao is directing The Eternals, the twenty-fifth entry in the Marvel Cinematic Universe. This Angelina Jolie-headlined motion picture will be the fourth directorial effort from Zhao but it will easily be the biggest motion picture she's helmed. Up to this point, Zhao has directed indie features so small in scale that they make the earlier works of fellow MCU directors like James Gunn or Jon Favreau look like Cecil B. DeMille epics by comparison. However, such an intimate storytelling approach has worked exceedingly well for the fascinating stories Zhao (who is tied with Ryan Coogler and Taika Waititi as the most talented director Marvel has ever snagged for one of their movies) has chosen to tell. Such films have included The Rider, one of last years best movies, and her directorial debut Songs My Brothers Taught Me.


Like The Rider, Songs My Brothers Taught Me is an exploration of the day-to-day lives of young Native American individuals trying their best to carve out their own identity against people and influences in their society that push them towards more conventional lives. Whereas The Rider was focused on just one person, though, Songs My Brothers Taught Me opts to follow two people, siblings Jashaun (Jashaun St. Johns) and John Winters (John Reddy), both of whom live on the Pine Ridge Indian Reservation and are rattled by the sudden death of their father. In the wake of this tragedy, John keeps his mind focused on sneaking in alcohol to the reservation and his plans to head out to Los Angeles with his girlfriend.

Such plans ensure that John becomes estranged from his sister, leaving Jashaun to sets her sights on a new father figure she can look to for guidance. Shifting between two perspectives over the course of one movie doesn't yield a story quite as exceptional as The Rider, but such a feature would be a high bar to clear in any case. Songs My Brothers Taught Me is still an extremely well-crafted movie that reaffirms Zhao's talents for exploring how we mold our identities and the difficulties we can face in that process. This is especially apparent in the life of John Winters, a kid with dreams of moving off to Los Angeles and charting his own path as a response to both classic teenage rebellion as well as the prospect of ending up like his old man.

Meanwhile, Jashaun's longing for a new companion leads her to befriending local artist Travis (Travis Lone Hill), a friendship with moments of sweetness for both individuals but eventually ends in tragedy. Zhao's script paints both John and Jashaun's stories with a tragic brush that she realizes with immense potency, particularly in any of the scenes where Jashaun realizes the complexities of the larger world around her. A scene in the third act involving one of her other brothers that actually lived with her father talking about how absent their parents were is an especially raw and emotionally brutal depiction of that universal experience of learning how your parents are complicated flawed people just like everyone else.

On a more specific note, the depiction of the Pine Ridge Indian Reservation within Songs My Brothers Taught Me is fascinating, particularly in how the stories of the two lead characters allow for organic exploration of all sorts of different locations across the reservation. These kinds of locales and especially the people inhabiting rarely get explored in any capacity in modern American cinema and when they do, it's usually as background fodder for stories about non-Native characters. Chloe Zhao's script goes in the opposite direction, thankfully, the stories of Jashaun and John are put front-and-center while their neighbors, like their Mother (Irene Bedard) and Travis, get fully-realized as authentic human beings.

I especially like how this authenticity is reinforced by allowing the characters in Songs My Brothers Taught Me to have physical traits that run counter to the overly polished appearance of people in many major Hollywood productions. People in Songs My Brothers Taught Me are allowed to have large beards, tattoos covering their bodies or scars, they're allowed to look like unique human beings. Having Jashaun and John be surrounded by such characters makes their story feel all the more rooted in reality. The melancholy tone of that story is heavily informed by Zhao's camerawork, which frames the beautiful rural landscape of the Pine Ridge Indian Reservation with a mournful quality that reflects the complicated feelings the lead characters of Songs My Brothers Taught Me have towards the place they call home.