The Kitchen Makes A Mixed Bag of a Mobster Mayhem Movie 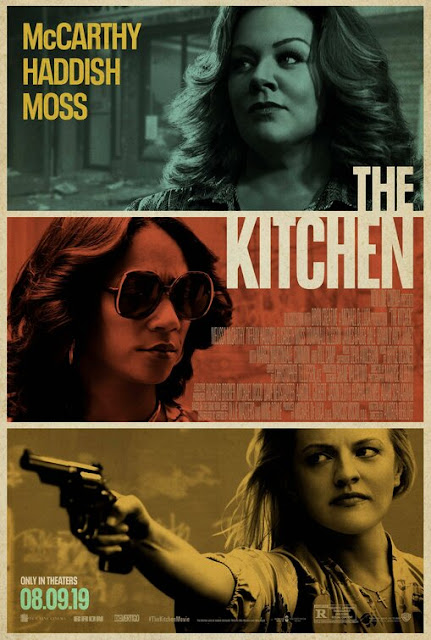 Kathy Brennan (Melissa McCarthy), Ruby O'Carroll (Tiffany Haddish) and Claire Walsh (Elisabeth Moss) have something very important in common beyond them all being the lead characters of the new mobster drama The Kitchen. They're all spouses of critical figures in the Hell's Kitchen mobster scene circa. 1979. All of their husbands have recently gone to prison and while the remaining mob figures have promised to take care of the trio financially, they're not getting anywhere near enough money to take care of their lives. That's when Kathy, Ruby and Claire decide to take it upon themselves to take control of their lives and run their own mob racket that begins to expand in power to such a profound degree that it upsets the previous mobster status quo in New York City.


Adapted from a graphic novel penned by Ollie Masters and Ming Doyle by writer/director Andrea Berloff, The Kitchen is a movie with some intriguing puzzle pieces that never manage to come together to form a great puzzle. The best of those intriguing pieces is the basic outline for what motivates each of the three protagonists, particularly Ruby and Claire. The former character is well aware of the scarcity of Black individuals in Hell's Kitchen, her husband and his relatives constantly reminded her of that. Tired of feeling like an outsider, she wants mobster power to solidify herself permanently here. Claire, meanwhile, was physically abused by her husband and jumps at the chance to be the one amongst the trio that does the dirty violent work.

Gangsters movies have been a staple of American cinema for nearly a century now but rarely have we had gangster movie protagonists with the kinds of motivations that constantly drive the leads of The Kitchen. Such unique material is handed off to a troop of talented actors plenty capable of handling this frequently heavy material. A number of moments in Elisabeth Moss's performance sees the actor continuing her run for MVP Actor of 2019 while Tiffany Haddish makes an impressive inaugural foray into dramatic acting with her turn as Ruby. I'd be very curious to see her continue pursuing this avenue of acting in the future given how thoroughly believable she is here at portraying Ruby's rise to power and what motivates that rise. Haddish can do comedy, sing and do dramatic acting, she's really a talent!

Unfortunately, the actors and interesting character material don't gel into a cohesive movie in the messy script by Andrea Berloff. Among its flaws is a weirdly episodic style of pacing that opts for brief spurts of easily-resolved conflict (like Ruby's husband abruptly becoming the primary villain for a segment of the third-act) rather than long-term overarching obstacles to motivate the story. I haven't read the graphic novel on which The Kitchen is based, so I can't say for certain, but I wonder if part of the problem here is the screenplay is adapting a graphic novel that originated as eight separate comic book issues?  Individual comic book issues typically have a standalone beginning, middle, and end and an overly slavish translating of that format to the movie version of The Kitchen might be the source of its underwhelming stop/start/stop/start method of storytelling that just doesn't work when applied to a long-form feature film narrative.

Whatever the origin of the issue, it's a problem that undercuts the trio's journey into the world of mobster activity big time, it just makes the whole thing feel too featherweight. Problems, like the introduction of an intimidating mob boss played by Bill Camp, get introduced, barely explored and then wrapped up in such a quick fashion that we never get a chance to see how such developments affect the characters. There are such interesting starting motivations for characters like Ruby and Claire that I kept wishing the film would just let its various plot turns breathe for a little while so we could see them react to such developments. Alas, The Kitchen always has an oddly hurried pacing to it, even a supposedly game-changing twist in regards to the allegiance of one supporting character in the third act comes and goes in such a prompt fashion.

Other odd script details, like an overdose of 1980s needle drops (most notably a pointless rendition of Carry On My Wayward Son) or bits of clumsy dialogue, further hurt the production. Berloff's directing (her first time working behind the camera) is similar in quality to her writing in that's mostly on the generic side but does show flashes of real promise. A lot of The Kitchen relies more on generic pieces of camerawork, but a sequence depicting two mobsters intimidating assorted individuals in a wide profile shot is probably the most imaginative scene in here visually while Berloff's camera does a fine job of capturing the griminess of the various sets used to realize late 70s Hell's Kitchen. There are certainly plenty of pieces of both Berloff's direction and The Kitchen as a whole movie that work well. It's certainly worth commending this non-sequel adult-skewing feature for delivering something ambitious at the tail end of a summer chock full of underwhelming and uninspired tentpoles features. But despite its better qualities, The Kitchen just can't make its positive pieces work with its underwhelming pieces to make a fully-formed puzzle to write home about.
Posted by Douglas Laman (NerdInTheBasement) at 3:45 PM