The Farewell Phenomenally Grapples With How To Say Good-Bye 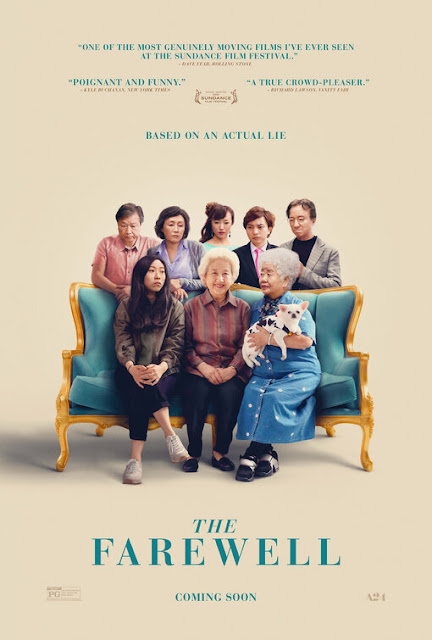 When I was a kid, I thought of all the adults in my life as permanent fixtures. My Uncle's, my Grandparents, family friends, they were all there when I was born, they were there so often when I was young, why wouldn't they be like the sun or the moon and always be around? But growing up means coming to terms with the fact that everyone is mortal. Even the ones you love dearly and never want to see go. Now an adult, I thought I had long since accepted this notion but it's one thing to accept that notion and a whole other to confront it firsthand. Losing a Grandmother and a dearly beloved Uncle in the span of three years made me realize how nobody is ready to say goodbye to those people you once thought of as permanent.


The Farewell, a movie from writer/director Lulu Wang, recognizes just how hard it is to process the idea of saying goodbye to the ones you love. In this case, the one who has to deal with this task is Billi (Awkwafina), a woman born in China but raised in America by her parents. Her grandmother, Nai Nai (Zhao Shuzhen), along with most other members of their family have stayed behind in China. While asking her parents why they're suddenly going back to China, Billi learns the devastating news that Nai Nai has been diagnosed with lung cancer. Her grandmother is dying and her family has decided to follow Chinese tradition and not tell the dying relative about their condition.

Against her parent's wishes, Billi accompanies them to a big family gathering in China disguised as a wedding for Billi's cousin but in actuality serves as a chance for everyone to say goodbye to Nai Nai. Once she arrives, Billi must grapple with the prospect of losing a relative she holds so dear to her heart while struggling to not let her Nai Nai in on the truth. From the very first scene where a crestfallen Billi interacts with Nai Nai onward, Lulu Wang's script brilliantly creates dialogue exchanges between these two characters that nimbly walk the tightrope of making Billi's sorrow clear while also functioning well enough as casual conversations that it's believable that Nai Nai wouldn't suspect anything is up.

One of the most moving moments in Up is when the character Russell, upon talking about the moments he remembers most fondly with his dad,  remarks "...I think it's the boring stuff I remember the most" That's an idea The Farewell refers back to constantly as characters like Billi navigate the aforementioned tightrope walk of putting on an air of normalcy amidst far from normal circumstances. No matter how much the members of Billi's family try to push away the reality of Nai Nai's condition, it lingers over every scene like a formidable storm cloud. Lulu Wang creates some of the most poignant parts of The Farewell just from how much importance the most seemingly humdrum of dialogue exchanges take under the specific context of a loved one dying.

This is particularly apparent in an extended conversation Billi and Nai Nai share while preparing for the wedding. As they go about helping the bride selecting dresses and inspecting the location where the ceremony will take place, the two of them just talk about the future, each other and all sorts of other mundane topics. For Billi and her memories spent with her Nai Nai, this is an example of "boring stuff" that she'll remember the most. With this sequence, Awkwafina shines in conveying Billi's internal emotional experiences. Through her performance, you can see how she's trying to put on an exterior of everything being hunky-dory yet she conveys so powerfully in subtle terms how every word she shares with Nai Nai suddenly takes on an immense level of importance to Billi.

Awkwafina is absolutely incredible in this scene as well as the entirety of The Farewell. Through her supporting performances in Ocean's 8 and Crazy Rich Asians, Awkwafina has made her chops as a comedic actor abundantly clear but she's an outright revelation as a dramatic performer here, particularly in regards to how she conveys the realistically complex emotions anyone experiences at the prospect of losing a cherished relative. It's a performance ripped straight from the real world and the same can be said for Zhao Shuzhen's performance as Nai Nai. Since her character is the lone figure in the story not grappling with her impending demise, she's able to define Nai Nai as a wholly realized character and not just have her be defined by her tragic medical status.

Shuzhen conveys such a warm and enjoyable personality in her work in The Farewell that makes it abundantly clear why Billi would feel so close to her. Though Awkwafina and Shuzhen deliver the best performances in The Farewell, the whole cast is really outright sublime thanks to Lulu Wang's script affording them all actual characters to play. One of the best parts of The Farewell is how it allows each member of Billi's family to have a discernable and unique point-of-view in regards to whether or not it's right to keep Nai Nai's diagnosis from Nai Nai and such variety in perspectives allow supporting players like Diana Lin, Tzi Ma and Jiang Yongbo the chance to shine in inhabiting three-dimensional supporting figures.

Wang's style of writing, when combined with excellent visual traits (like pieces of subtly informative blocking during scenes where the whole family is gathered together) in her own direction and the superb cinematography of Anna Franquesa Solano, flesh out the characters in The Farewell and make Billi's family come alive as a realistically complex family. I saw so much of myself and my own family members in the characters of The Farewell and I especially saw so much of my own experiences with grappling with the loss of loved ones in its portrayal of Billi spending time with her Nai Nai. Coping with the reality that the people we love are not eternal figures in this world is always a monumental struggle, that's something I've experienced firsthand over the last few years. But films so emotionally rich as Lulu Wang's The Farewell, they help make that process just a bit easier to bear by reminding us of the importance of all those little moments we share with our loved ones.
Posted by Douglas Laman (NerdInTheBasement) at 12:25 PM