Scary Stories to Tell In The Dark Gets Its Frights Right 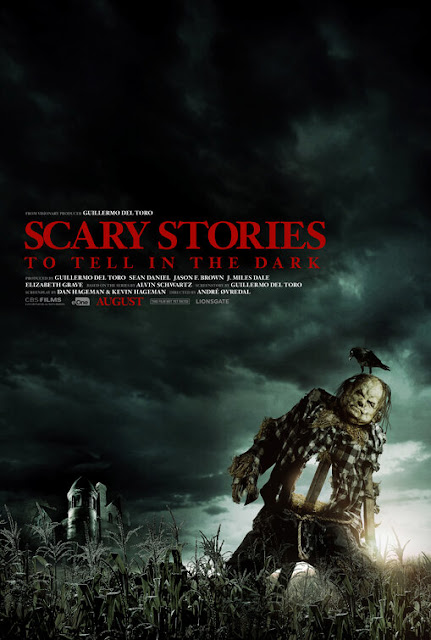 Children love a good scare. Kids literature has proved this countless time over the centuries, dating back to all those gruesome Grimm Brothers Fairy Tales. In the modern era, the likes of R.L. Stine and Neil Gaiman have delivered books that give youngsters chills they can't get enough of. The book series Scary Stories to Tell in the Dark, penned by Alvin Schwartz, has proved to be such a popular example of kids horror literature that it's a shock it's never been adapted into a film before now. Such an adaptation has finally come to life from director Andre Overdal as well as from producer Guillermo Del Toro, who also penned the screenstory for this feature.

Whereas the original books were just collections of standalone spooky stories, the movie version of Scary Stories to Tell In The Dark has a singular narrative that manages to involve a whole bunch of these warped tales. Such a narrative involves a group of teenage pals, including our protagonist Stella (Zoe Colleti), living in a quiet town in Pennsylvania in 1968 and spending Halloween night poking around in an infamous old house once occupied by a child-murderer named Sarah Bellows. While inspecting the house, Stella stumbles onto and proceeds to take home an old book, one that she quickly discovers has the ability to write out horror stories that proceed to come to life and kill off people she knows.

Her friends initially dismiss Stella as just making stuff up but it quickly becomes apparent that the danger here is all too real and that this book could lead to everyone's demise as the hands of assorted monsters that readers of the original Scary Stories to Tell In The Dark book will be familiar with. Using the plot of Jumanji/Goosebumps as a framework for translating this text to as a traditional narrative film isn't the most imaginative storytelling move but it's a serviceable enough one, especially since screenwriters Dan Hageman and Kevin Hageman make sure that the individual character arcs transpiring in the middle of all the creepy monster mashing are cohesive enough, particularly Stella's long-simmering anxieties about her potential role in her Mother leaving her family.

It's also a nice touch that the script does lean heavily into the 1968 setting, including recurring glimpses via television broadcasts into the American Presidential election of that year. On the other hand, the supporting characters needed further polishing, especially Stella's only real school friends Auggie (Gabriel Rush) and Chuck (Austin Zajur). Though the latter character does get some humorous comedic lines, their interactions, especially early on in the film, feel highly stilted and don't believably sell that these kids are long-time buddies. These characters also get saddled with some humorously clumsy expository dialogue explaining the personality of Stella to a new figure in their town, Ramon (Michael Garza), which seems to be a symptom of awkward dialogue found throughout the whole motion picture.

Luckily, the most important scenes of Scary Stories to Tell In The Dark smartly make little use of dialogue. I'm talking, of course, about the various sequences where the evil book wrecks havoc on unsuspecting people in Stella's life. Such scenes are where director Andre Overdal truly shines as a filmmaker, especially in terms of how he creates tension through an impending sense of dread. A scene where Chuck is being chased by an entity known as The Pale Lady doesn't need blood and guts to get you creeped out, just the way Overdal shows this creature constantly making its way towards Chuck no matter what hallway he goes down is enough to set me on edge. The creatures that come from the pages of this book, like The Pale Lady, have a quietly relentless quality to them, they just pursue their prey no matter what even when you can't see or hear them.

Both the characters and the audience know they're out there, waiting for the opportune moment to pounce and the suspense is killer, sometimes literally. These figures are all the more intimidating since they're brought to life primarily through practical effects work that lends a tangible effect to creepy adversaries like Harold the Scarecrow, they truly feel like actually living, breathing and frightening creations. There are also some impressively disturbing moments sneaked into this PG-13 horror feature, namely the extended body horror demise of the first victim. The more low-key character-driven sequences of Scary Stories to Tell In The Dark have sporadic levels of success ranging from actually dramatically involving to TV movie level of eye-rolling attempts at humor. But when it comes time for this movie to get really, well, scary, it does deliver some enjoyably chilling sequences and it's highly likely such sequences will appease those younger viewers who enjoy their horror literature.
Posted by Douglas Laman (NerdInTheBasement) at 11:20 AM