Ready or Not, Here Comes An Awesome Horror/Comedy 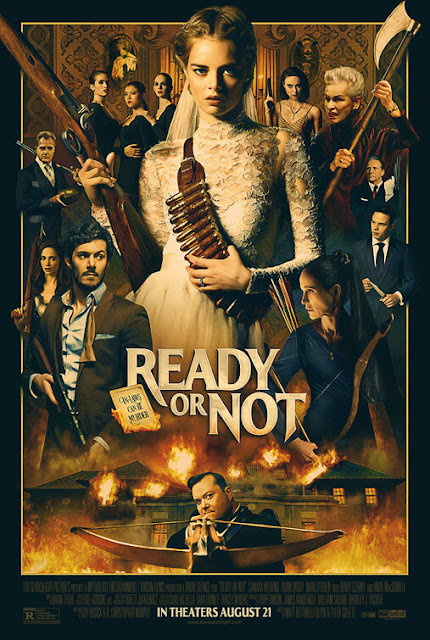 Horror/comedy is such a fun genre. Combining seemingly disparate elements like yuks and gruesome scares is one of those mixtures that just works against all odds. It's the cinematic domain that Sam Raimi and Peter Jackson cut their teeth on as directors and other noteworthy filmmakers like Edgar Wright and Wes Craven have excelled in. Want a great modern-day example of this genre? Look no further than Ready or Not, a directorial effort from Matt Bettinelli-Olpin and Tyler Gillett. Put simply, this movie is a whole heck of a lot of fun to watch, the kind of film that leaves you laughing as often as it leaves you in intense suspense.

The lead character of Ready or Not is Grace (Samara Weaving) is a touch nervous about her wedding day. She's about to get hitched to Alex Le Domas (Mark O'Brien), a member of the ultra-wealthy La Domas family, there's so much pressure to live up to here. No wonder she's so nervous! After the wedding ceremony, she learns of a Le Domas family tradition that occurs whenever someone new is welcomed into the family. The tradition concerns the family playing whatever game is suggested by an old trinket one of the families ancestors treasured. In this case, the device informs the family that they'll all be playing hide-and-seek. Seems simple enough! But it's made quickly apparent that the Le Domas family has deadly plans for Grace. Once they find her, well, they plan to kill her!

Now Grace has got to use everything in her power to make it through this gruesome game night. Her struggle for survival turns into a movie that's gruesome fun to a tee. There's this playful macabre quality to the whole production that's utterly delightful, from the spiteful dialogue exchanged by the various members of the Le Domas family ("Ah, brown-haired niece...you still exist!") to the bloody ways members of this wealthy household get taken out to suspenseful set pieces like one involving Grace trying to get herself out of a pit full of corpses. In that particular sequence, writers Guy Busick and R. Christopher Murphy seem to be having a ball keeping the viewer on the edge of their seat as Grace tries to navigate all the difficulties of making her way up a crumbling ladder.

The pervasively high-spirited nature of the proceedings makes Ready or Not utterly delightful to watch, particularly in regards to the dark comedy that emerges from this scenario. Ready or Not gets a lot of comedic mileage out of the sight of the members of the Le Domas family just not being adept at the task of slaughtering people. This is particularly true of Emilie Le Domas (Melanie Scrofano) who seems incapable of picking up a weapon and not inadvertently firing it at a nearby member of the Le Domas staff. Better yet, both the writers and the actors tasked with these characters do a great job of giving each of the Le Domas characters distinct and entertaining personalities, with Adam Brody as the morally conflicted Daniel (brother of Alex) being an especially fun creation.

Though they can fall prey to comedically gruesome demises, the bloodthirsty nature of this family and the wide array of tools at their disposal still make the Le Domas characters menacing threats for Grace to face. The character of Grace is portrayed by Samara Weaving in an excellent leading turn that emanates relatable humanity in a way that nicely echoes plenty of classic genre film protagonists who were just normal people forced to fight against over-the-top malicious adversaries (think Ash in Evil Dead). Weaving's all-around awesome in her performance but I especially love her extremely determined facial expressions and body language in the second half of the film that convinces you, just with the way she looks at characters chasing her down, that she's totally got the gumption to take out anyone who crosses her.

Weaving's got fierceness to spare in her performance and it's one of a number of delightful turns in a wonderful cast that also includes Andie McDowell and Henry Czerny. All of these actors are working under the direction of Matt Bettinelli-Olpin & Tyler Gillett, a pair of filmmakers who deliver strong work behind the camera save for some overuses of shaky-cam during a couple of hand-to-hand confrontations. Pulling off the tonal balance that's required for a horror/comedy is a tricky proposition, not everybody can do it, but Bettinelli-Olpin and Gillett prove they can totally pull it off with style in Ready or Not. Horror/comedy maestros Sam Raimi and Joe Dante would be proud of what they've done here because, like a lot of classic Raimi and Dante motion pictures, Ready or Not is a total blast to watch.
Posted by Douglas Laman (NerdInTheBasement) at 9:08 AM