The Savages Is Another Authentically Messy Achievement From Tamara Jenkins 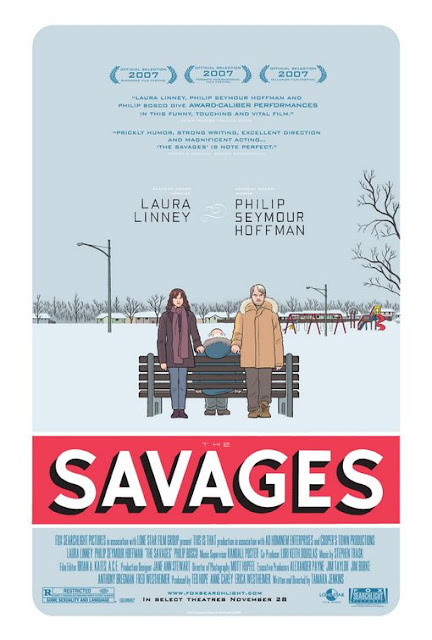 Who exactly are the titular family of The Savages? Well, they're an eclectic group mostly consisting of a father, Lenny (Phillip Bosco) and two adult children named Wendy (Laura Linney) and Jon (Philip Seymour Hoffman), with Wendy serving as the stories protagonist. Both Wendy and Jon are trying their best to muddle through their lives when they get the news that their distant father is having extreme issues related to a newly formed case of Dementia in Arizona on the other side of the country. Wendy and Jon bring their father back to their neck of the woods in Buffalo, New York and set him up in a nursing home. As she tries to chart a course for where her life needs to go, Wendy decides to live with Jon so that she can be nearby if their father has any issues.


What follows is a story that certainly feels like a companion piece to Private Life, the newest directorial effort The Savages director Tamara Jenkins. The two movies share a number of qualities, including the fact that they're both exceptional films, but what especially stands out to me is how both are so good on a visual level, especially when it comes to comedy. The Savages has some remarkable visual sensibilities that are established right away in its opening sequence as Lenny's Arizona home is painted in bright colors and an abundance of bright natural light while Wendy and Jon's respective homes and workspaces are adorned in drearier colors that can only find brightness through interior light sources like lamps.

These color and lighting choices are great visual conveyers of how, up to this point, Lenny's been living in a paradise, but now he'll be dragged to murkier reality by his offspring. The visual choices of Savages also aid a number of comedic moments in the motion picture, especially when paired up with the well-timed editing of Brian A. Kates. A gag of Jon going on a big speech about how pristine nursing homes are only made for the benefit of younger people rather than their actual residents has a killer punchline thanks to how Jenkins visually executes the gag while the sight gag of Jon outfitted in the human equivalent of the Cone of Shame is utterly hysterical especially with how Hoffman portrays Jon trying to be composed even while he's wearing such a ridiculous item.
Between Private Life and now The Savages, Tamara Jenkins has made it clear that her works will make use of sublime visual comedy as well as thoughtful explorations of human beings trying to navigate all the underwhelming messiness of life that rarely adheres to one's expectations. In the case of The Savages, this sort of thematic thread is used for the story of Wendy, an aspiring writer whose life is already chaotic before her Dad becomes stricken with dementia thanks to a lack of job opportunities and an on-again/off-again romantic relationship. Being stuck with her brother for a prolonged period of time doesn't help matters, the richly realistic dynamic between Linney and Hoffman sees the two more often than see their time together end in arguments rather than in discovering tidy resolutions to their respective personal issues.

There really isn't any major revelations to solving personal woes in The Savages, just like there weren't any in Private Life, but that's what makes these films so good. Jenkins renders authentic people struggling with everyday life and normalizes the idea of it being OK to not have all the answers or not feel like you're in control. The characters in The Savages are just doing what they can and that makes for plenty of relatable awkwardness, a feature results in plenty of comedy for sure but also some of its most poignant moments. Such a trait also turns out to be something both of the lead actors in The Savages can just run with like a star quarterback clutching a football, Laura Linney and Philip Seymour Hoffman both deliver outstanding lead performances here.

Linney especially impresses with the complex role she's offered as a person struggling to find direction, she exudes so much discernable humanity in all of the stumbles (like kissing a nursing home employee or lying about receiving a fancy grant) that her character experiences throughout the story. Playing opposite her is Hoffman who excels both in his dry comedic line deliveries and in lending believability to this particular role. As said earlier, the two of them interacting with one another yields a magnificent rapport that feels immensely accurate to how actual grown-up siblings behave. Their dynamic is messy, touching, funny, nerve-racking, sometimes all at the same time! That makes their dynamic just like films written and directed by Tamara Jenkins like The Savages.
Posted by Douglas Laman (NerdInTheBasement) at 5:39 PM