The Peanut Butter Falcon Is A Pleasant And Charming Affair 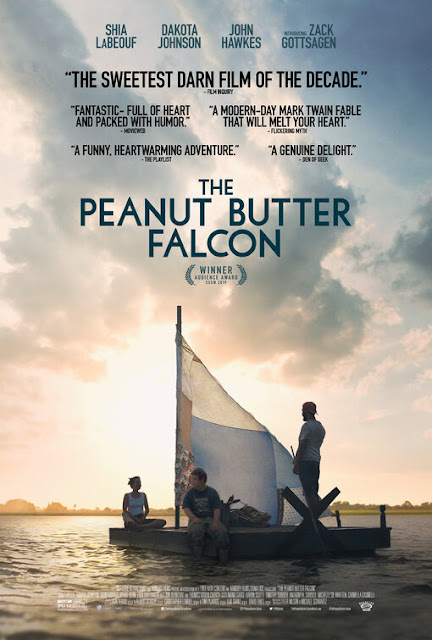 Zak (Zach Gottsagen) is an adult man with Down Syndrome who has spent the last two years looking at the outside world from a distance. State authorities have kept Zak locked up in a nursing home with people considerably older than him and with no chance to go out there and pursue his dream of becoming a pro-wrestler. One night, he manages to break out of the nursing home and begins to make the trek to a wrestling camp run by his hero, The Salt Water Redneck (Thomas Haden Church). Along the way, he runs into Tyler (Shia LaBeouf), a man on the run from a pair of vicious redneck hooligans (one of which is played by John Hawkes). Tyler didn't plan to have company on his voyage to Florida but since the wrestling school is on his way, he and Zak team up for an impromptu road trip, with both the redneck hooligans and nursing home employee Eleanor (Dakota Johnson) hot on their trail.


Both written and directed by the duo Tyler Nilson & Michael Schwartz, The Peanut Butter Falcon takes this laidback tale and turns it into an enjoyable romp across the SouthEast portion of the United States of America. The proceedings clearly owe more than a touch of creative influence to the works of Mark Twain (the presence of Twain is so discernable that Tyler even references the author at one point) in terms of being a Southern-set tale about two misfits encountering colorful characters all across a series of standalone adventures. There are far worse authors to crib from than Twain and the same sort of pleasant entertainment that could be found in many of Twain's works can also be found here, with the best entertainment emerging from the dynamic between Zak and Tyler.

The duo’s friendship is realized in both a realistic and ultra-sweet manner that places just as heavy of an emphasis on small moments, like devouring some watermelon together, between the two characters, as it does on bigger predicaments, like outrunning a boat when they cross a river, that they keep finding themselves ensnared in. Their friendship allows the films protagonist, Zak, to get fleshed out as a person in one of the many instances of the script deviating from typical cinematic depictions of characters with Down Syndrome. The scripts thoughtful approach to Zak, brought to life through a delightful performance by Zach Gottsagen (the actor who inspired this character and this film), results in the best scene of the movie in which Zak notes how he’s destined to be a Bad Guy in the world of wrestling because so many of his coaches, teachers and other figures of authority in his life have reinforced the idea that it’s impossible for him to be a hero due to him having Down Syndrome.

So many movies make characters like Zak comical sidekicks unaware of the world around them but in this scene of The Peanut Butter Falcon, Zak is allowed to express how the world's treatment of him affects him and shaped his worldview, he’s allowed to be introspective about how his Down Syndrome impacts his life It’s a touching scene that, much like Rocket’s “I didn’t ask to be made like this!” bar breakdown scene in the first Guardians of the Galaxy, resonated with me on a personal level, as a person on the Autism spectrum, as an authentic cinematic depiction of what it's like to be a person with a cognitive and/or mental disorder being all too aware of how the rest of the world see’s them. Similarly well-written are brief moments referencing Tyler's personal hang-up's related to his deceased brother, The Peanut Butter Falcon approaches this part of his personality in subtle ways that allow LaBeouf to communicate the character's grief in a subdued yet powerful manner.

Much like The BFG, of all movies, The Peanut Butter Falcon works so well as just two characters chilling together that when it comes time for actual conflict to enter the proceedings, it feels like a distraction from the enjoyable hangout vibe. In the case of The Peanut Butter Falcon, the more traditional narrative elements that feel tacked on include a darker manifestation of Zak's ambitions and a forced romantic subplot between Tyler and Eleanor. It's so much fun to just watch Zak and Tyler get into low-key antics on their ramshackle road trip, there's a groovy sense of aimlessness to these scenes that just isn't found in the more predictable dramatic climax where all the various plotlines converge.

It doesn't help matters that the movie has an abrupt ending that'll leave viewers united in wondering aloud "Oh, is it over?" Before a more underwhelming third act, though, The Peanut Butter Falcon works just fine as a relaxed late-summer diversion, especially when it comes to the strong lead performances of Zach Gottsagen and Shia LaBeouf. These two have such an entertaining rapport in their assorted sequences that I'd love to see them do other road trip movies together like Bing Crosby and Bob Hope used to do back in the day. For now, though, their initial foray together, The Peanut Butter Falcon, is a sweet piece of pleasantly inconspicuous cinema.
Posted by Douglas Laman (NerdInTheBasement) at 1:26 PM