Filmmaking Gone Awry Proves To Be Captivating In Lost Soul: The Doomed Journey of Richard Stanley's Island of Dr. Moreau 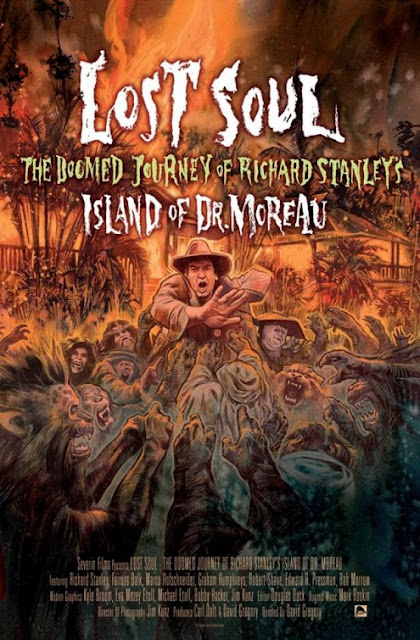 It's a common occurrence in the modern blockbuster landscape to hear stories of a director originally set to helm a splashy high-budget project get taken off the project during pre-production, reshoots or even principal photography due to that age-old excuse of "creative differences". Josh Trank on Fant4stic, Phil Lord & Chris Miller on Solo: A Star Wars Story, Stephen Gaghan on that upcoming Dolittle movie, oh, the list goes on and on. But few of these departures were as chaotic as when Richard Stanley was fired a few days into filming on his passion project, a feature film adaptation of The Island of Dr. Moreau. What led to Stanley taking this gig in the first place, his firing and the fallout of this decision is chronicled in the documentary Lost Soul: The Doomed Journey of Richard Stanley's Island of Dr. Moreau.


An entry in the subgenre of documentaries about film productions gone awry (one of my favorite subgenres!), Lost Soul follows interviews with a wide assortment of individuals involved in the Dr. Moreau project ranging from Richard Stanley himself to former New Line Cinema (the studio behind the film) executives to actors on the film. Though the various interviewees come from different backgrounds and each have unique personalities, they all share the common thread of having witnessed true blue madness on the set of this film. The persistent mayhem that plagued this project makes for some utterly engrossing anecdotes from the people who saw it all first-hand.

It all started out so innocently enough. Richard Stanley's interview segments paint a picture of him being a rising star filmmaker in the early 1990s thanks to projects like Hardware and Dust Devil and how he wanted to use his clout to bring to life a passion project of his; a proper film adaptation of The Island of Dr. Moreau. Stanley's earliest interviews are accompanied by truly distinctive pieces of concept art that make it clear his vision of Dr. Moreau was gonna be some out-there stuff. These images make it clear that the titular doctor would now be influenced, in both personality and appearance, by New Age spiritualism while the idea of animals that get turned into humans would be taken to some...let's say extreme places.

It's hard to imagine every bit of Stanely's vision ever making its way into a major motion picture financed by a studio as big as New Line Cinema but it's also hard to imagine that Stanley wasn't pouring his heart and soul into this unforgettable interpretation of H.G. Wells' iconic text. But as the film goes on, all those ambitions quickly begin to unravel by a downpour of misfortune. Casting troubles lead to original leading man Bruce Willis being replaced by Val Kilmer, an actor who immediately does not get along with Stanley, while an unexpected hurricane leaves the production struggling to film anything outdoors. Right after that hurricane hits, Stanley gets removed from the project and that's when things really go off the deep end for this already troubled movie.

From here, interviews with Stanley stop for a prolonged period of time as director David Gregory proceeds to interview extra's and crew members involved with Dr. Moreau once director John Frankenheimer took over the set. Frankenheimer had a pronounced stern personality that was already causing problems for the set but he was far from the most disruptive creative individual on the set, goodness no. The infamously troublesome personalities of Marlon Brando and especially Val Kilmer create all kinds of nightmarish anecdotes in the second-half of Lost Soul. I was constantly aghast at what people on this set had to endure, especially in regards to the stories they tell about Kilmer. Putting out a cigarette in a crew members ear, what the hell was up with that guy?

Lost Soul is a documentary that totally understands that this Dr. Moreau movie and its chaotic production is like a trainwreck you just can't turn away from. Why else would so much screentime be dedicated to the captivating tales from crew members of the ceaseless misery they experienced throughout this shoot? Those interviews are truly riveting to watch, I really could have just heard people tell horror stories about the set of Dr. Moreau all day long. But there's also a quiet sadness to the feature whenever it comes to the Richard Stanley interview segments that prove to be quite affecting. He's far from the only filmmaker to be jettisoned mid-production while helming a feature film, but the way Lost Soul clearly establishes the very personal motivation and distinct creative vision Taylor had for this movie makes it so disheartening to watch this recounting of all the anguish suffered by Taylor and so many others during their stay on the Island of Dr. Moreau.
Posted by Douglas Laman (NerdInTheBasement) at 12:13 PM