Steven Soderbergh's The Limey Is Brilliantly Written and Edited 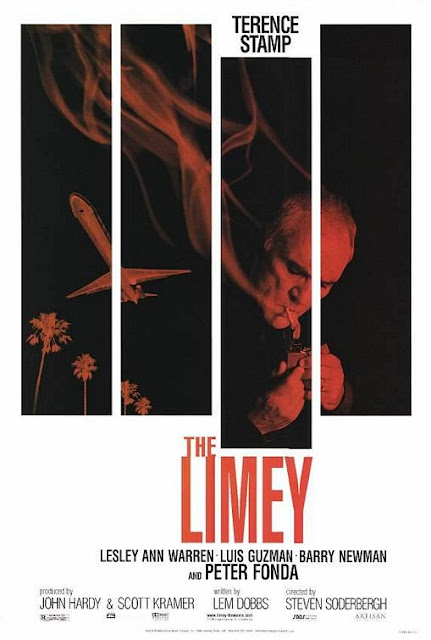 Typically, Steven Soderbergh movies have more than a touch of comedy to them. Sometimes the comedy manifests itself in more pronounced ways like in his features Logan Lucky or The Informant!, other times it emerges in more subtle ways, but usually Soderbergh delivers movies that are likely to deliver a chuckle for every bit of inventive piece of camerawork. His 1999 crime drama The Limey has moments of comedy to be certain, like an amusing sight gag of a server passing out drinks as police officers and ambulance workers try to take care of a dead body. But it's one of the more melancholy Soderbergh directorial efforts I've seen and that turns out to be the proper tonal choice for this specific story.


Said story concerns Wilson (Terrence Stamp), a mysterious man hailing from Britain who has just gotten out of jail and is now headed to Los Angeles to investigate the circumstances surrounding the death of his daughter, Jenny. They say Jenny died in a car crash but Wilson has his own suspicions about how she could have perished. Talking to one of her closest friends, Eduardo (Luis Guzman), Wilson learns that Jenny was connected to a man by the name of Terry Valentine (Peter Fonda), a powerful figure in the world of record labels. Wilson is a man who goes after he wants. In this case, he's willing to main, injure and even kill anyone who gets in between him and the answers Terry Valentine can provide.

Amusingly, with The Limey, Soderbergh basically made a more thoughtful pastiche on those Taken movies a whole decade before the first Taken movie even came out! Yes, like so many of Liam Neeson's movies, The Limey is a story of an older man going on a violent crusade of revenge for his daughter, but this particular movie makes it clear from the beginning that it has more on its mind than just employing cathartic violence. For starters, editor Sarah Flack gives the movie a unique visual rhythm too unorthodox to ever possibly be seen in a Taken movie. Specifically, conversations in The Limey see characters talking in cohesive linear conversations but they carry on their exchanges in different locations.

One fragment of Wilson's dialogue could take place in a diner, another in a garage, yet another in an office. It's a bold decision that at first totally threw me off but Flack's impeccably executed keeps the conversations flowing so gracefully over the course of these scenery changes that it was easy to get into the rhythm of this editing style. Her editing also seamlessly interweaves footage from an older Terrence Stamp movie entitled Poor Cow into flashback sequences. It's impressive how well these scenes (rendered here without sound) fit into the specific characters and storylines of The Limey, you'd never be able to guess they hailed from an entirely different movie.

It isn't just Sarah Flack's tremendous skills as an editor that stand out as impressive in The Limey. The screenwriting from Lem Dobbs, for instance, is also a standout trait, especially in how it creates such interesting characters to populate the story. Tony Valentine, for instance, is technically the main antagonist of the movie, but Soderbergh amusingly writes him not like a typical crime movie foe but as something more entertaining. Specifically, Valentine is a mostly meek fella who delegates all the dirty work to the seedy criminal types in his social circle, a personality Peter Fonda's performance nicely reinforces.

Two of those seedy criminals end up having their own subplot that amusingly collides with the main proceedings thanks to their overgrown hubris. The way they factor into the climax also feels like a brilliant deviation from crime movie norms, there's no fancy shootout to be found here, it's just a bunch of bumbling trigger-happy criminals flailing around as they wait for a boogeyman (Wilson) to arrive. It's an amusing finale that briefly takes The Limey into farce territory as so many of Wilson's adversaries take each other out before Wilson even arrives onto the scene. Following up this climax comes a final scene that cements both the melancholy nature of The Limey and its screenplay being phenomenal.

A traditional showdown between the protagonist (Wilson) and antagonist (Valentine) gets interrupted once Wilson realizes that the behavior that caused Valentine to kill Jenny is the same kind of behavior Jenny, as a child, would use on Wilson to try and stop him from his criminal activities. Suddenly, an already enjoyable twist on the crime thriller genre takes on a whole new layer of importance in every respect, including in the editing. Sarah Flach's editing has constantly evoked the editing in Manilla in the Claws of Light in how it merges the past and the present during conversations and this ending now makes it clear why that's the case, Wilson now sees his own past behavior towards his daughter reflected by this Valentine scumbag in the present. The Limey's ending is a wonderful mic-drop moment from writer Lem Dobbs executed with such skill by director Steven Soderbergh that I wanted to watch the whole feature again right away.
Posted by Douglas Laman (NerdInTheBasement) at 11:26 AM