Mads Mikkelsen Excels In Arctic, Which Strips Its Story Down To The Bone 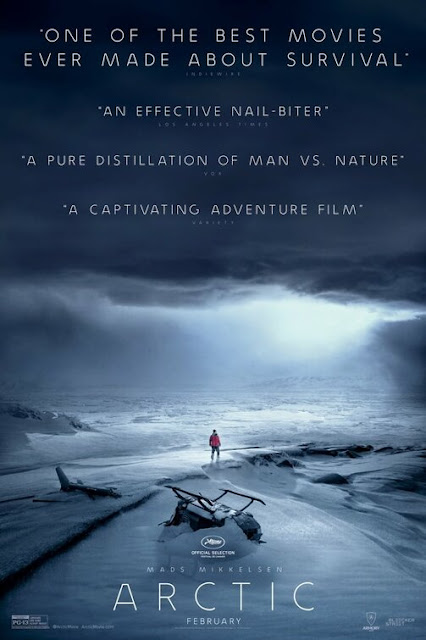 Arctic begins in media res with protagonist Overgard (Mads Mikkelsen) already having been stranded in the Arctic Circle for an undisclosed amount of time. We never see how he got here, what his life was like before being stuck here, we only know him as a man trying to survive the unforgiving icy wilderness. One day, Overgard believes his nightmare is over as he spies a nearby helicopter and begins to signal to it for help. However, the helicopter crashes to the ground and leaves just one unnamed survivor (Maria Thelma Smaradottir). Overgard now has to take care of this survivor as he makes a perilous trek to a terrain that has a slim chance of bringing him closer to help. It's a chance he has no choice but to take.


Scripted by Joe Penna and Ryan Morrison and directed by Penna, Arctic is a stripped-down survival tale in nearly every respect. Dialogue is minimal, only one character gets a name and there's nary a tidy character arc to be found in sight. Most movies about isolated people struggling to survive like I Am Legend or Cast Away rely heavily on flashback sequences to provide greater character-based context for how the struggles of the lead character relate to their own personal challenges, but Arctic has no time for that. In an effort to reinforce how long he's been trapped in these circumstances, Overgard is just a man defined not by anything more than his endurance to survive.

I love me a good cinematic character exercise, but that's not an element that needs to be in every single movie. Arctic's decision to make Overgard's experiences more of a showcase for the relentless survival instincts of humans than as a straightforward protagonist turns out to be just fine for this particular movie, especially since Mads Mikkelsen is on-hand to portray these instincts in such a powerful manner. The man responsible for the best on-screen portrayal of Hannibal Lector has no problem in working with minimal dialogue, on the contrary, Arctic turns out to be a great showcase for Mikkelsen's abilities to consistently grab the audience's attention with such a restrained performance.

Also getting their good work heavily showcased here is Arctic's sound department. With no dialogue exchanges going on here, most of what we hear in Arctic are simple noises like Overgard's knife breaking through ice or footprints drudging across the landscape. Many of these everyday noises take on a greater terrifying context simply given how dire the circumstances of this story are. This is particularly true in regards to the ominous recurring sound of Overgard's stopwatch beeping which begins to feel like a taunt to Overgard about how time is running out as the story goes on. Much like Mikkelsen's quietly engrossing performance, the sounds of Arctic are subtly impressive in how they make Overgard's plight all the more terrifying and visceral.

Though the sound work and Mads Mikkelsen's performance are extremely memorable, Arctic's general story does tend to be a bit on the derivative side. Overgard's struggles of getting up mountains, scavenging for good and facing off against a polar bear tend to feel overly reminiscent of prior survival thrillers and the stripped-down approach in the storytelling means there isn't any extra character-specific details or a specific style of dialogue to help lend a fresh coat of pain to these occasionally familiar events. Arctic's simple-to-a-fault aesthetic doesn't make the film bad, but it does make it hard for it to truly captivate you when your watching it or cementing itself in your memory once it's finished.

Luckily, the well-paced proceedings still register as a well-put-together movie, particularly in the direction of Joe Penna and the cinematography of Tomas Orn Tomasson that are critical components for making Overgard's surroundings as visually intimidating as they are. Also impressive is that despite the film intentionally eschewing the chance to establish a personality for Overgard, I still found myself heavily invested emotionally with the big nail-biter climax that sees him making his final push for survival. Its stripped-down tendencies could have stood a more distinctive execution, but any movie like Arctic that gets me so engaged in its finale has done something right.
Posted by Douglas Laman (NerdInTheBasement) at 1:16 PM