Blinded by the Light Hits A Decent Amount of High Notes 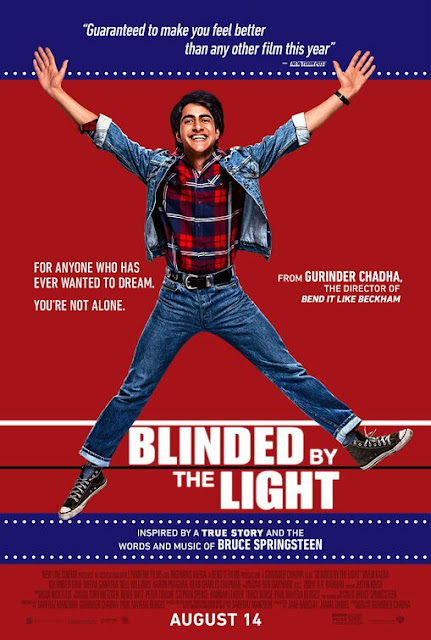 You ever have the urge to just leave this podunk town, grab your lover and chase your dreams? Javed Khan (played by Viveik Kalra and a fictional character representing real-world writer Sarfraz Manzoor) constantly feels like that. A Pakistani sixteen-year-old living in Luton, England with his sisters, his mom, Noor Khan (Meera Ganatra) and stern father Malik Khan (Kulvinder Ghir). His Dad just wants Javed to focus on his classes and pursue a "real job" but Javed harbors secret dreams of pursuing a career in writing. Feeling isolated from his family and rampant bigotry against Pakistani's in his town make him feel alone...but he finds salvation in the music of Bruce Springsteen, whose tunes resonate on a profoundly personal level with Javed.


What follows is a whole bunch of coming-of-age plotlines, sequences dedicated to characters prancing around on-screen to the tune of Springsteen songs and a whole bunch of Springsteen needle drops. It's all told through a heartfelt manner that throws subtlety to the wind which has its benefits and drawbacks. On the drawback side of the equation, Blinded by the Light has a number of moments and dialogue exchanges so on-the-nose that they cross over from being endearingly overt to being clumsily overt. A prologue sequence showing child versions of Javed and his best buddy Matt that concludes with young Javed shouting "We're gonna be best friends forever!" is one example of the movies cornball tendencies eliciting eye-rolls rather than more warm n' fuzzy emotional sensations.

Another issue stemming from the script, penned by Manzoor, Paul Mayeda Berges and the film's director Gurinder Chadha, is its overabundance of one-note characters who drift in and out of the movie without good reason. None of the characters in Blinded by the Light are grating or bad, per se, but some figures, like Javed's chum Roops (Aaron Phagura) or Javed's sisters, come across overtly as mechanisms to move the plot along. Characters can accomplish that function in a script but it typically also helps if they can also simultaneously work as interesting characters in the protagonist's world. Too often Blinded by the Light opts to use its supporting characters as ways to move pieces around the plot chessboard rather than as a chance to create fully-fleshed out people in Javed's life.

Clearly, there are flaws to Blinded by the Light, but it's also got plenty of good qualities to its name that do help to make it a charming endeavor overall. For one thing, the character of Javed is a well-realized underdog character you can get invested in. Cinema is full of small-town dreamers inspired by music, but one of the ways Blinded by the Light's script makes sure Javed stands out from the pack is by emphasizing his specific experiences as the son of Pakistani immigrants. From the way he deals with bigots in Luton, England to the manner in which he navigates the strict aspirations his Dad has placed on him, Javed's life has a sense of specificity to it that makes his struggles emotionally engaging rather than derivative.

This protagonist is also aided by a wonderful lead performance by Viveik Kalra. He imbues the character with such an endlessly endearing quality that you just wanna give Javed a big o'l hug in his most downtrodden moments. The character of Javed's father, Malik Khan, is also a nicely realized character in the motion picture. Though he's framed as the austere antagonist for much of the runtime, Blinded by the Light takes time to emphasize moments of nuance in this character that make him feel like a three-dimensional person. A scene where he cries over his perceived failures as a father and a husband while his wife works on his hair, for instance, allows a human being to emerge in Malik Khan while other small pieces of dialogue handed to the character help to make the viewer understand what informs (while not necessarily agreeing with) his worldview.

That approach to the character of Malik Khan is a very nice touch and a similarly welcome piece of creative flair comes in how director Gurinder Chadha chooses to employ brief flashes of heightened reality to visually express how deeply the songs of Springsteen are affecting Javed Khan. A sequence depicting Javed, walking outside during a storm, listening to these tunes for the first time while on-screen text versions of the lyrics of these songs plaster the environments around Javed. Javed's reaction to hearing these songs for the first time is larger-than-life and Chada chooses to imaginatively depict his response to these tunes in a similarly grandiose way. It's through this method, plus Viveik Kalra's great work portraying the role, that one becomes so emotionally invested in Javed Khan that you'd have to be made of stone not to shed a bunch of tears once you see what happens to the character in the poignant climax of Blinded by the Light. This is a movie that doesn't hit every note properly, but the ones it does hit truly sing.
Posted by Douglas Laman (NerdInTheBasement) at 10:24 AM