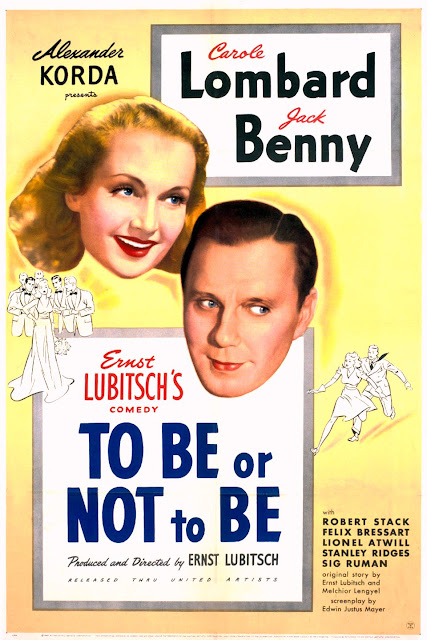 For a long period of time, American cinema refused to acknowledge the growing threat of Nazism in Europe. Much like today, major American pop culture has a nasty habit of trying to remain neutral in the face of fascism or all sorts of other horrors affecting oppressed communities so that they don't lose the potential spending of fascists and bigots, all while marginalized communities suffer at the hands of fascists. Eventually, though, the horrific realities of the Nazi regime did get recognized in American cinema. and one film to confront Hitler's reign of power head-on was Ernst Lubitsch's satirical comedy To Be or Not to Be. Though that may not be the first genre you'd imagine using to explore then modern-day horrors, it turns out to be the perfect domain to both take the piss out of Nazi's and to produce some mighty witty comedy.

It all begins with Hitler. Well, specifically, a member of an acting troupe in Warsaw, Poland walking out into the streets of the city dressed up like Adolf Hitler and fooling the local populace into thinking the Fuhrer has come to Warsaw. This sequence not only establishes the convincing costumes and makeup work this troupe has at their disposal, but it also introduces us to our lead characters. The most prominent of those characters is married couple Josef Tura (Jack Benny) and his wife Maria (Carole Lombard). The group is about to put on their newest play when both their theatrical ambitions and entire lives get turned upside down by the arrival of Nazi forces who proceed to occupy Warsaw and exact their cruelty over the denizens of Warsaw.

Also newly arriving in this village is Lt. Sobinski (Robert Stack), a young pilot Maria is secretly seeing behind her husbands back. Sobinski brings urgent news to Maria that a spy for the Axis powers, Professor Siletsky (Stanley Ridges), is actually a German spy! Now it's up to Maria, Josef and all of the actors to use their abilities as performers to stop Siletsky from giving over crucial information to Nazi forces. What follows is all kind of madcap comedic mayhem that gets a lot of hilarious scenarios out of the actors trying to pull the wool over the eyes of nefarious Nazi followers. This includes a great scene where Josef, dressed as a Nazi superior, constantly leaves a meeting with Siletsky to go convene in a "closet" with his fellow actors.

Modern-day comedians who think "edgy" humor is all about white people simply doing racist stuff would be wise to go back and watch To Be or Not to Be for a master course in how to pull off bold boundary-pushing comedy. Under the direction of Lubitsch (who actually hails from Berlin, Germany) and a script penned by Melchior Lengyel and Edwin Justus Mayer, To Be or Not to Be uses all of the talent it has on hand to create some truly stirring and rib-tickling comedy. Much of this comedy comes from both a barrage of witty dialogue and an impeccable sense of comic timing, with both elements typically working together in tandem to create some truly wondrous comedy. The latter element of comic timing is especially pronounced during any of the exchanges between a disguised Josef and the various Nazi forces he's interacting with.

Jack Benny's keen sense of comic timing means he knows just how to accentuate the awkward moments in these interactions for maximum comedic effect. Such sequences are a real showcase for Benny's talents as a comedic performer and I'm especially fond of how organically he weaves in the ego of his character Josef Tura into the alter-ego's he portrays, most notably his recurring inquiry to assorted Nazi's regarding if they've heard of a famous actor by the name of Josef Tura. Carole Lombard, in her final film role, is, like Jack Benny, an experienced comedic performer who similarly excels within the confines of To Be or Not to Be, Lombard is an absolute hoot in portraying how skillfully Maria plays all the Nazi men infatuated with her like puppets on strings.

An impressive collection of supporting actors, including a touching turn from Felix Bressart, ensure that acting talent in this production is not just limited to the two main performers while a similarly splendid quality of To Be or Not to Be is how well it can convey the menacing nature of the Nazi's without undercutting the comedy. An early montage sequence showing how Warsaw is changed over time by occupying Nazi forces is genuinely chilling to watch while Bressart's character finally getting to confront Nazi forces in the climax and deliver to them a speech given by Shylock in Merchant of Venice is a stirring moment of rebellion, a demonstration of how art can be used by marginalized groups to poke fascists square in the eye.

It's utterly impressive that Lubitsch is able to balance those moments with moments of such extreme wackiness that include a disguised Josef being stuck in a room with a corpse or a recurring gag comparing Hitler to cheese. Of course, one way this equilibrium is achieved is that the jokes never undercut the dramatic elements in the plot, it's not like To Be or Not to Be goes from the aforementioned montage of Nazi's occupying Warsaw to a sequence mocking people stuck in those conditions. The montage, instead, is used to establish the terrifying nature of the Nazi monsters who will be on the receiving end of all the comedic antics To Be or Not to Be subsequently dishes out. Also aiding the balance between disparate tonal elements is the simple fact that the comedy in To Be or Not to Be is hysterical, every intricate detail informing this movie's style of humor left me in stitches. Hollywood should really learn to be less terrified of alienating bigots and fascists, not only would it be good to not placate such groups, but creating art that stands directly against such forces can result in some truly exceptional cinema like To Be or Not to Be.
Posted by Douglas Laman (NerdInTheBasement) at 9:19 AM