Doomed! Is A Documentary Ode To A Never-Released Superhero Movie 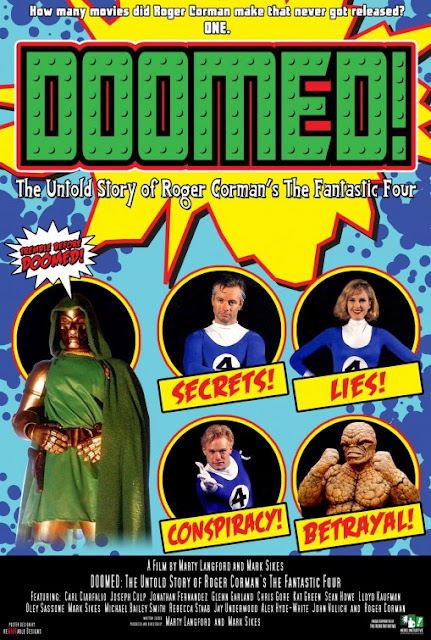 In the history ofcrummy superhero movie creative decisions, outright shelving a nearly finished Fantastic Four movie, originally slated for a theatrical release in 1994, has gotta be up there. It's a bold move that left all the creative participants in the project shocked to the core and turned this Roger Corman-produced motion picture into a legend overnight. 25 years later, no official release of the project has seen the light of day, it's stuck in some vault somewhere at Marvel Headquarters. While we all wait for the Disney monopoly, er, corporation, to maybe possibly release this thing once and for all, the documentary Doomed! The Untold Story of Roger Corman's Fantastic Four allows the creative participants of this fabled film to finally tell their experiences about being a part of the big blockbuster that never was.


Director Marty Langford has assembled pretty much everyone involved from this production, from the lead actors (among them Alex Hyde-White and Michael Bailey Smith) to the director (Oley Sassone) to even B-movie legends Roger Corman and Lloyd Kaufman. Over the course of Doomed!, we get to see the unique deal that led the studio behind Carnosaur to score the film rights to the Fantastic Four, the slipshod conditions of the set the cast & crew worked on and the blood, sweat & tears people poured into the post-production and promotional process of this movie. All that effort only for the rug to be pulled out from underneath everybody when Marvel just bought the film back and put it on a shelf.

There's a cathartic quality to the interviews that make up the entirety of Doomed! After decades of living with stories about this movie being never intended to be released to the public, you can feel the emotional cleaning these actors and crew members feel in being able to talk extensively about how much they toiled to make this the best possible movie they could under the circumstances. It's clear that nobody involved here was sleepwalking through a production never meant to be seen the public, the way they describe it, they carried a passion for this material and that especially comes through in the interviews with Alex Hyde-White, an actor who grew personally close to his role of Mr. Fantastic.

Such catharsis is mixed in with dark humor in the first half of the film as the various participants recount the slipshod conditions they worked on while putting together a superhero movie on a B-movie budget. Descriptions of the dilapidated bug-infested soundstages they shot various parts of the movie on will make your skin crawl and then make you all the more impressed that these people kept up their morale all throughout the shooting. Perhaps the best on-set tale told through these interviews is a much more lighthearted anecdote with a person involved in planning the production who had to play The Thing during reshoots. That's already a fun tale but the subsequent sight of Oley Sassone, in his own standalone interview, realizing he's seated just a few feet away from this person and then recounting memories of the impromptu shoot with him is utterly delightful.

Such wistfulness soon gives way to tragedy as the people being interviewed recount the experience of being told their movie isn't going to get released at all. You can feel the still-raw pain felt by all these cast & crew members thinking over the job opportunities lost over this movie never coming out, all their effort for naught. The set-up and execution of Doomed! isn't exactly an imaginative one as far as documentaries go but it's hard to gripe with that considering how viscerally it's able to communicate the emotional experiences of these people realizing this Fantastic Four film will likely never see the light of day. You feel their emotions so vividly that they become their own and isn't that the point of any movie, documentary or otherwise?

I sure hope the 1994 Fantastic Four movie gets released in an official form someday. On its own merits, it's easily the best Fantastic Four movie ever made and works just fine as a slice of early 1990s B-movie science-fiction cinema. But now that desire of mine has become informed with a whole new level of passion thanks to the greater level of context Doomed! lends the whole production. The 1994 Fantastic Four movie isn't just a weird little comic book movie urban legend, it's something human beings put themselves into both behind and in front of the camera. Their work deserves to be recognized by an official release. Until then, a great documentary like Doomed! will do as a reflection of all their efforts.
Posted by Douglas Laman (NerdInTheBasement) at 4:49 PM