Keanue Reeves Played A Neo-Noir Superhero In The Enjoyable Constantine 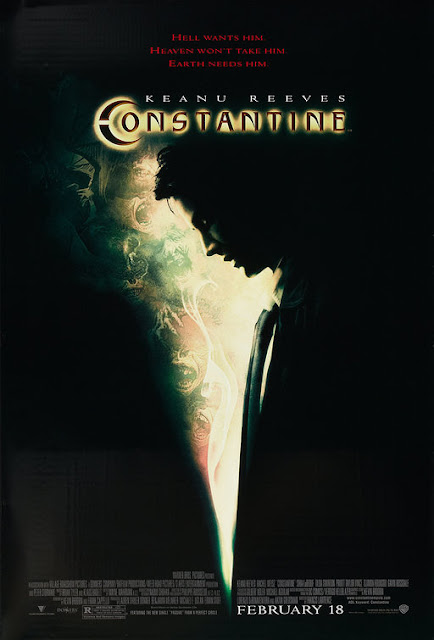 DC Comics has struggled to get quite as many of its comic book characters to spawn big-screen franchises compared to their Marvel Comics counterpart (2010s Red was the first DC Comics adaptation that wasn't based on Superman, Batman or Swamp-Thing to spawn a sequel), but they've still got a bevy of memorable standalone movies to their name. Case in point: the 2005 Francis Lawrence directorial effort Constantine based on the comic book character of the same name. Though initially, it received mixed reviews and fanboy disdain for deviating from the comics, it's since garnered cult classic status and for very good reason.


Constantine (Keanu Reeves) is technically a superhero but he's not really the kind who can leap tall buildings in a single bound or wears a cape. Actually, in one of a number of wonderful narrative strokes found in the screenplay credited to Kevin Brodbin and Frank Cappello, Constantine is actually depicted as more of a noir protagonist more than a conventional superhero. A loner figure constantly smoking a cigarette emotionally detached from the people around him who has his finger on the pulse of an unsavory underworld? Thank God all that digital human technology seen in Rogue One or The Irishman wasn't around in March 2005 because it's inevitable Warner Bros. would have tried and digitally recreated Humphery Bogart for this role.

Anyway, Constantine is a guy capable of seeing undead figures on Earth and also aware of God and Satan playing games with humans to see who can have a greater influence on humans. His services are called upon by detective Angela Dodson (Rachel Weisz) to help figure out the circumstances behind her twin sister's suicide (hinging the story on solving a mystery further makes Constantine feel like a superhero cousin to traditional noir films). The story that follows takes the characters into a creative world of radical reinterpretations of theological characters, including archangel Gabriel (played with delicious aloofness by Tilda Swinton) and a version of Satan played by Peter Stormare channeling Alan Tudyk.

Nothing in Constantine is all that revolutionary but it works as a fun gothic action movie, especially since the characters and the world they inhabit are so much fun to watch. John Constantine may be different from his comic book counterpart, but it's hard to care since this version of the character allows Reeves to inhabit a neo-noir protagonist archetype he was born to play. The consistently engrossing assured coolness of Reeves in movies like John Wick or his most triumphant moments of The Matrix fits like a glove into this interpretation of the Constantine character and lets this solo Constantine movie have a fantastic anchor. You also have to love Rachel Weisz alternating from her serious dramas with action/horror blockbuster hybrids like Constantine or The Mummy, God bless her.

The only real character that doesn't fit into the proceedings is a younger sidekick in the form of Shia LaBeouf's Chas Kramer. LaBeouf is perfectly fine in the role, but the character vanishes abruptly in the second act before returning in the third act in an equally sudden manner. Where did this eager taxicab driver go to for so much of Constantine? At least the world of Constantine itself is a more unwavering creation in its quality. Hiding the world of demons and angels in plain sight means our everyday world gets to be cleverly twisted up to suit the needs of these higher-beings. Demons can attack in the middle of a street, an underground tavern can secretly be a hangout spot for otherworldly creations and even a Catholic hospital can eventually morph into the spot where good and evil have their definitive showdown.

These characters and environments are captured through some of the most imaginative camerawork in director Francis Lawrence's career. Cinematographer Phillippe Rousselot helps to cement a sense of dread that helps make the horror parts of the story land with a punch. For instance, the unique camera angle used to capture Angela's sister jumping off a roof to her death allows us to see her the entire time she's plummeting to her demise before culminating in glass-shattering everywhere to cap off the stomach-churning scene with a disorienting finish. While Constantine isn't a perfect movie (for one thing, a mid-2000s movie appealing this heavily to the Hot Topic crowd really needed an original My Chemical Romance song), it's much better than its general reputation would suggest. It'll hit the spot for those, like myself, who think the idea of Keanu Reeves fighting demons sounds downright dandy.
Posted by Douglas Laman (NerdInTheBasement) at 4:30 PM