Godzilla: King of the Monsters Is More of a Pauper Among Modern Monster Movies 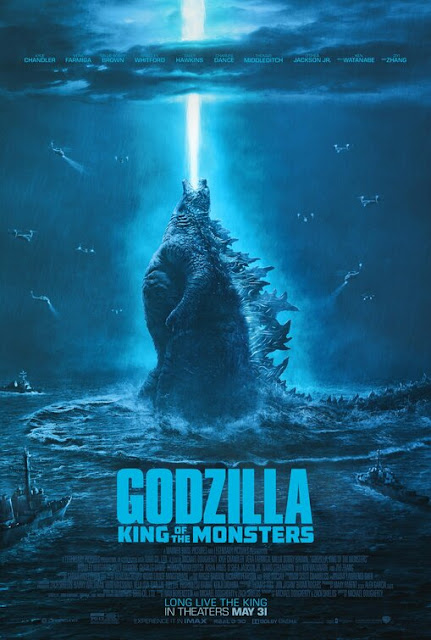 The greatest enemy Godzilla can never seem to defeat is not King Ghidorah nor Biollante nor Baragon. No, it's boring human characters, even the rightfully iconic 1954 Godzilla movie that introduced the world to this gigantic lizard couldn't evade the problem of having the majority of its human characters be dull. Why they don't just let Godzilla and the other monsters take the spotlight in these movies, I'll never know, but here we go again with Godzilla: King of the Monsters, which ramps up the amount of monster mayhem compared to Godzilla (2014) but ends up devoting way too much screentime to an overstuffed cast of disposable humans.


Dr. Mark Russell (Kyle Chandler) and Dr. Emma Russell (Vera Farmiga) lost their young son in the San Francisco Godzilla/MUTO's battle that closed out the last Godzilla movie. Five years later, Emma is living with their daughter, Madison (Millie Bobby Brown), while working for the organization Monarch, which is dedicated to keeping tabs on monsters. Meanwhile, Mark is off in isolation still reeling for the loss of their son. Emma and Madison, along with a fancy new device that can control monsters, are soon kidnapped by a nefarious terrorist who has his own plans for the various monsters on Earth. Monarch calls in Mark to help rescue his family, a mission they'll need Godzilla help in carrying out.

Godzilla: King of the Monsters is a movie in desperate need of some simplification. The story constantly hops around numerous locations and has so many human characters to juggle, one can easily lose track of what humans are doing and where and for what reason. If we're gonna spend so much screentime on these people, couldn't they at least be interesting? A whole horde of talented actors (Sally Hawkins, Zhang Ziyi and especially O'Shea Jackson Jr.) have nothing to do in their disposable roles beyond deliver expository dialogue. There are so many awesome performers in sight yet no one thought to bring any kind of personality to the characters themselves. Water water everywhere, but not a drop to drink.

Writer Michael Dougherty, of Trick r' Treat and Krampus fame, can certainly write fun thinly-sketched characters whose only purpose is to die at the hands of holiday-themed monsters but when it comes to writing human characters Godzilla: King of the Monsters clearly wants the viewer to get emotionally invested in, he and fellow screenwriter Zach Shields come up short. There's just so little that's memorable about the individual members of the Russell family and their individual character arcs are executed with little in the way of flair or fun. This leaves Kyle Chandler and Vera Farmiga as yet another example of talented human actors going to supreme waste portraying subpar characters in Godzilla: King of the Monsters.

Granted, nobody comes to a Godzilla movie for the characters but then why is the movie so focused on them? Why all this effort to convolute things with the presence of so many boring human characters? We're all here to watch monsters fight, so let's just do that! Keep it simple! Did we learn nothing from the many mistakes of those needlessly complex Pirates of the Caribbean sequels? Alas, too much of the focus keeps going towards boring human drama, including just when monsters are about to engage in some exciting throwdowns. On at least three separate occasions, a shot of monsters about to engage in combat is followed directly up by the camera cutting to whatever tedious nonsense the humans are up to.

That's already disappointing no matter how you slice it, but it's especially aggravating given how much fun the monster mayhem that occurs on-camera actually is! Monster brawls are something Godzilla: King of the Monsters does quite well and when it decides to actually focus on that part of the production, the movie truly sings. The last thirty minutes or so where the focus begins to narrow down exclusively to monster antics is easily the best and most lively part of the entire movie! Both here and in earlier sequences of the feature the unique power sets of the various monsters (most notably the nifty abilities of three-headed baddie King Ghidorah) get put to great use. Meanwhile,  the mythic nature of these beasts is excellently reinforced in visual terms by numerous pieces of cinematography that take one's breath away. In the best shots of Godzilla: King of the Monsters, one can totally buy why these creatures were so revered in ancient times.

Some of the best human-centric sequences take a cue from the visual-oriented monster fight scenes and just let the imagery do the talking, particularly in a poignant scene involving Ken Watanabe's character. Unfortunately, too many of the human-scale parts of the action set pieces are captured in clumsy handheld shaky camerawork that echoes the worst pieces of camerawork you'd find in a Paul Greengrass movie. Even worse, while the monster typically get to duke it out in lavish distinctly colored locales that lend a painterly backdrop to their duels, the humans, whether in action sequences or dialogue-heavy sequences, just occupy some truly forgettable sets. Monarch might have the most blandly designed aircraft ever flown by a secret organization in a movie while Charles Dance's villain runs his operations from a dingy lair devoid of any personality.

The lack of creativity in the sets that the human characters occupy reflects the serious lack of fun present in the human-based plotlines Godzilla: King of the Monsters regrettably chooses to focus much of its attention on. While Mothra fully engrosses ones emotional investment effortlessly, human beings like the Russell family or their Monarch cohorts just never capture one's passing interest, no matter how many recognizable actors are on-screen portraying those roles. There are some really thrilling scenes in here that are bound to make any Kaiju fan squeal in delight but they only serve to reinforce how much of a forgettable slog the rest of the production is. A definite downgrade from the ambitious & atmospheric 2014 Godzilla movie, Godzilla: King of the Monsters needed more monsters, less monotony.
Posted by Douglas Laman (NerdInTheBasement) at 10:00 PM