What Is 10 Cloverfield Lane? Who The Hell Knows, But The Trailer For It Is Pretty Memorable 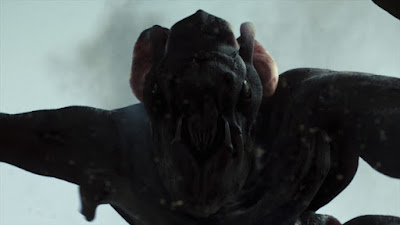 Let's time travel back to the year 2007, when an eleven year old NerdInTheBasement saw Transformers on its second day of release. My first theatrical PG-13 experience, I got a thrilling rush when, prior to the screening, the trailer for the R-rated Superbad played. Woah! An R-rated movie! What a time to be alive! Sure, it was the green-band trailer and so no nudity, drug use or explicit swearing was to be found, but still, it was the trailer for what was pretty blatantly an R-rated feature film. Could it get any better than this??

As it turned out, yeah, it could have, for my screening of Transformers did not have the trailer for a super secret J.J. Abrams produced project that carried no title, only a 1-18-08 release date. It took a few days until this trailer went online, so just reading about this mysterious trailer on the interwebs in the days afterward left me anxious for more information. Turns out, I wasn't the only one hankering for more clarity on what exactly "1-18-08" was, with the internet being sent in a frenzy of speculation over what the hell the movie was. Some misheard the line "It's Alive!" as "It's a lion!", thereby figuring the film, to be a Voltron prequel, others devoted YouTube videos to deciphering the poster, hoping to find some visual clue as to what the monster in the film might look like.

And so, it's 2016, Time may march onward, but J.J. and his mystery box are as persistent elements in this world as water and air. Nine years later, a Michael Bay directed film (this time, 13 Hours) has delivered a surprise trailer for a mysterious J.J. Abrams produced project also entitled Cloverfield. This one, however, we've known about for a while, albeit, no one had a clue it was connected to Cloverfield. But yeah, we've known fro a while Mary Elizabeth Winstead (RAMONA!!!!) and John Goodman would be starring in a Bad Robot film that would be released on March 11, 2016.

All of that information still pertains to this project previously entitled Valencia, now called 10 Cloverfield Lane. This teaser trailer gives no indication to what capacity, if at all, it may be connected to Cloverfield (Abrams, for the record, has gone on record calling this new film a "cousin" to that 2008 Matt Reeves production), and Drew McWeeny over at Hitfix speculated on Twitter that Cloverfield could become a franchise of sci-fi anthology films, a cinematic version of The Twilight Zone if you will. All of the speculation on this project is just as fun as it was back in 2008 (though the phone I'm using today to scour the internet for speculation is far smaller than the one I was using eight years ago!), but hey, let's not forget that there's a trailer for this movie that debuted last night!

Since my screening of 13 Hours last night was special, in that there was a Q&A session directly after the feature (I didn't stick around for that session, just for the record), I got no trailers prior to Michael Bay's newest film, so it wasn't until I got home that I saw that the internet was abuzz with proclamations of "Is this real?" "Is this happening?". Separated from all the hype and connections to Cloverfield, this is actually a mighty fine teaser, especially in the song choice that manages to go from being tranquil to unsettling without skipping a beat. Plus, how awesome is it to see Mary Elizabeth Winstead in a high profile lead role like this and John Goodman playing against type as an antagonistic figure? All of the marketing blitz and speculation is fun, but frankly, this teaser for 10 Cloverfield Lane would more than work on its own merits. I mean, Damien Chazelle (the writer and director of Whiplash) is one of the screenwriters on it!! How cool is that?!?!
Posted by Douglas Laman (NerdInTheBasement) at 11:29 AM