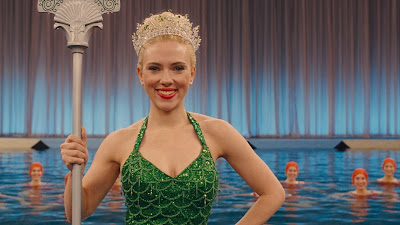 
Only 23 days left until this one hits theaters, and man oh man, this trailer makes that small window of time seem all the more excruciatingly eternal. Primarily concentrating on one scene from the film (specifically, an exchange between characters played by Alden Ehrenreich and Ralph Fiennes), the extremely humorous rhythm of the dialogue between these characters effectively segues into a montage of footage from the rest of the feature, and concludes with an excellently understated punchline. Am I little bit hyped for this one? You could say that, yeah.

I'll also say, before moving on to the next trailer, I'm excited to see what Coen Brothers newbies Channing Tatum, Jonah Hill and Scarlett Johansson do in this film, since all three have shown they can be quite skilled with humor in the past. What this trio of actors could do under the direction of these two cinematic masters is the very definition of the world tantalizing.
Kevin Hart: What Now?
And now, a super brief look at an upcoming Kevin Hart stand-up comedy concert film that Universal is smartly attaching to screenings of the new Hart motion picture Ride Along 2 this weekend. There is nary an example of Hart's stand-up comedy stylings to be found in this trailer, but judging by the huge box office of his past stand-up comedy films (his 2013 feature Let Me Explain grossed $32 million and became the fourth biggest stand up comedy concert movie of all-time), it's likely his fanbase doesn't need further coercing to see his work.
https://www.youtube.com/watch?v=qr_nGAbFkmk
Money Monster
I have no clue where this one came from, but damn, this one just blasted its way onto my radar. My more positive response to this trailer seems to be in the minority of the overall general consensus, but I really do like the way this trailers builds up a tension laced atmosphere by confining most of the trailer to one location (the set of George Clooneys financial advice TV show). Here's hoping the feature film doesn't sqaunder the potential of Money Monsters premise, cause damn, this trailer shows there could be something special here.
https://www.youtube.com/watch?v=JzUtr5sjRvU
Triple 9
There is a loooooot of plot to get through in the new trailer for Triple 9, and that does leave the overall piece feeling a tad overstuffed. That being said, this does look like something that stands apart from the pack, mainly thanks to the darker nature of the trailer and that stacked cast (which includes Kate Winslet as some kind of mob boss, which is something I never realized I need until I watched this trailer). Also cool to see Casey Affleck in a lead role like this considering how good he was in the underrated Out Of The Furnace.
Free State Of Jones
Why does this look so much like a History channel documentary, specifically in the outdoor scenes? For a $65 million budgeted feature, I'm pretty shocked that so much of this trailer looks kind of subpar in terms of production value (maybe 90% of the budget went to the paycheck of Matthew McConaughey?). Aside from its visual shortcomings, this is an OK trailer that seems heavy on spoilers, but does at least present a plot that certainly has the potential to be interesting. Hopefully in its final feature length form the production imperfections are compensated for by more interesting characters and vibrant emotion than what's found in this more middling trailer that can't even give McConaughey the chance to deliver a memorable monologue in his beautiful voice.
Posted by Douglas Laman (NerdInTheBasement) at 6:02 PM