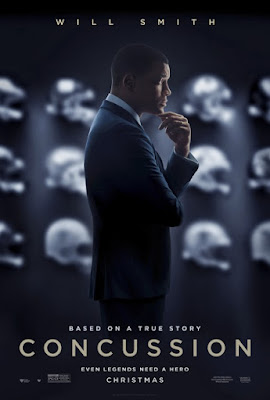 Despite having spent all my years of my life living in Texas, the game of football just never quite grabbed my fancy. Oh, it never struck me as something bad per se, frankly, I think the fact that the overstimulating nature of the game (read: constant loud cheering occurring in unpredictable intervals) not gelling with my Asperger's Syndrome was more of a reason than anything else. But I'm well aware of the game, certain examples of its terminology and the importance it has to the lives of the majority of Americans. That final concept is one that Concussion makes sure to emphasize, as its lead character, Dr. Bennet Omalu (Will Smith) discovers that the repetitive head trauma experienced by the players of the ultimate pastime for millions of individuals is responsible for brain damage causing erratic behavior such as early suicides in those players.

Of course, the idea that a sport so integral to so many doesn't sit well with those around Omalu, including the NFL itself who wishes to quietly sweep all of these discoveries under the rug. The NFL is obviously doing so in the name of protecting their financial investments, but they and the everyday inhabitants Omalu encounters decry the findings as preposterous despite the concrete science propping them up. Their refutations of clear science feels similar to why many dismiss the idea of racism existing in the modern day world or climate change; acknowledging that such an entity exists in such a fundamental way in our everyday lives is such a daunting concept, it's better to ignore it rather than reconciling the truth.

I do wish more layers were given to the antagonists figures Omalu runs into, since they tend to be just one-dimensional foes and...well, that's it. For instance, there's one guy working with Omalu in early scenes, prior to Omalu discovering the dangers of football playing, that just hates his guts for no explicit reason except our hero I guess needed to come across as an underdog in this section of the picture. Conversely, the depictions of the players suffering from intense psychological trauma from their football playing are surprisingly well handled, with the acting behind these characters coming across as appropriately tragic and not hammy.

Recent films like After Earth have brought down the profile of Will Smith quite a bit, but thankfully, Concussion provides a sterling example that this guy can still deliver a good performance when given the right material. Smith makes every monologue rife with scientific jargon not only interesting to listen to, but also sound (appropriately for his super educated character) the kind of material he's so knowledgeable about he could probably lecture about it in his sleep. Plus, he manages to make the Nigerian accent of Omalu work, something I feared would be distracting when I first heard it in the marketing materials for Concussion.

Unfortunately, Gugu Mbatha-Raw as Prema, the eventual wife of Omalu, is humorously underused in the film. After seemingly knowing her for only a week or two, Omalu proposes to her, and the reveal that her character is suddenly pregnant is handled in a similarly rushed manner. Thankfully, their interactions don't make up too much of Concussion, allowing for its more successful elements (and there are plenty of those) to leave more of an impact. Best of those elements? The properly downbeat tone of the film, with the screenplay by Peter Landesman (he also directs this movie) thankfully giving the entire affair a nicely morose ending that shows the wide range of the epidemic Omalu is grappling with. Considering how ingrained football is as a pastime into most people in this country, can one person really change all of this? Can one person truly upend the conventional norms and alert the public to the underlying but severe dangers of this sport so many adore? Maybe, maybe not, but Concussion does quites well in showing an individual trying to do just that.
Posted by Douglas Laman (NerdInTheBasement) at 7:25 PM