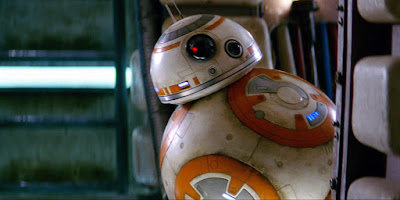 The Force got to nestle into one more week as the number one movie in America, since Kevin Hart and Ice Cub going on another Ride Along next weekend will almost certainly move the newest Star Wars movie out of the top spot. For now though, Rey and her friends made another $41.6 million, a steep 54% decline from last weekend, more than twice the 26% drop Avatar experienced in its fourth weekend. This is the second biggest fourth weekend on record and takes the films domestic cume to a massive $812 million. Yes, it is the first feature to cross $800 million domestically, when inflation is not take into effect.

Speaking of inflation, The Force Awakens is now the 15th biggest movie of all-time when inflation is taken into account, narrowly edging out Return Of The Jedi. In terms of attendance, The Force Awakens will almost certainly edge out The Empire Strikes Back (which grossed $845.3 million in 2016 dollars) by next weekend. Finally, it's also worth noting that the film took its worldwide total to $1.73 billion this weekend, all but assuring it'll crash through $2 billion worldwide.

In second place was the massive surprise of the weekend, The Revenant, which grossed a tremendous $38 million this weekend, the fifth biggest wide opening weekend debut in January history. In terms of wide release opening weekends for Leonardo DiCaprio, this is his fourth biggest debut in history, behind only Inception, The Great Gatsby and Shutter Island. And hell, it'll become the biggest movie ever for director Alejandro Gonzales Inarritu by at least Tuesday. Yeah, this is a major win, to say the very least, for all involved.

Starting with Shutter Island in 2010, every single one of the films Leonardo DiCaprio appears in (sans the 2011 box office dud J. Edgar) have managed to gross $100 million domestically. The dudes garnered a great reception with moviegoers, and there's no doubt that The Revenant got a massive boost from his presence. Kudos also must go to the marketing for this motion picture, which sold an easy to tell concept (man wants revenge against the individual who left him for dead) as well as unique imagery. Toss in a number of high profile award nominations and strong reviews, and yeah, no shocker this one overperformed to some impressive as hell numbers.

In third place was Daddy's Home, which lost 49% in its third weekend to nab another $15 million and bring its domestic cume to a strong $116.3 million. Look for this one to out gross past Will Ferrell comedies Blades of Glory and The Other Guys in the next few days.

Four years ago, The Devil Inside opened to a massive $33.7 million in the first weekend of January. Disastrous reviews and audience reception torpedoed its chance at sticking around at the box office (it closed its short domestic run with only $53.2 million), but to say this was a gargantuan success on only a $1 million budget is a major understatement. Horror films had been released on the first weekend of January in the past, but suddenly, this specific weekend was on the radar of all the movie studios. Each year since then has brought a new horror movie looking to replicate the success of that micro-budgeted feature, but none have come close to that level of financial prosperity. Hell, only one (Texas Chainsaw 3D) has gotten past $20 million.

This years offering in this new tradition was The Forest, which performed above expectations with a solid $13.1 million. This film was far more expensive than the likes of The Devil Inside (for the record, The Forest had a $10 million budget), but considering The Forest was an original film with no connections to a previously existing franchise, nor any A-list filmmakers or stars to latch onto in its marketing, this is a decent performance. In the realm of supernatural horror movies, this debut is almost exactly on par with the opening weekend of the far more costly Crimson Peak and a smidge above One Missed Call, a horror film with a majorly deceptive poster that opened in the first weekend of January in 2008. Surprisingly, no horror movie has nabbed the first weekend of January 2017 yet, though I expect that'll change in the coming months.

This was a tough weekend for holdovers in the marketplace, with the majority of the returning films losing over 50%. One exception to this rule was the motion picture that rounded out the top five, Sisters. Losing 44% in its fourth weekend, this Tina Fey/Amy Poehler comedy grabbed another $7.1 million for a total domestic cume so far of $74.8 million. Damn, this one's really sticking around, likely thanks to good word-of-mouth and being a more lighthearted alternative to darker fare like The Forest, The Revenant, etc.

Despite adding 464 theaters, The Hateful Eight lost a whopping 60% this weekend and adding $6.3 million to its domestic haul of $41.4 million. Right behind that Quentin Tarantino film was The Big Short, which also grabbed $6.3 million after adding a whopping 941 theaters. The Big Short has now taken in $42.8 million and will likely stick around at the box office for a while still considering its bound to garner a few Oscar nominations come this Thursday.

In eighth place was Alvin And The Chipmunks: The Road Chip, this musically inclined rodents storing another $5.5 million, taking their domestic cume to $75.6 million. In ninth place was Joy, which dropped a sharp 56% to gross an additional $4.5 million. This Jennifer Lawrence film has now taken in $46.5 million and seems to be officially underperforming. Rounding out the top ten was Concussion, which had a harsh 61% decline in its third weekend, grossing another $3 million for a current domestic total of $30.9 million.

Right outside the top ten was Point Break, which collapsed with a 69% plunge that resulted in a $2.1 million haul this weekend and a current domestic total of only $26.7 million. In fifteenth place was Carol, which brought its theater count 525 locations for a $1.47 million gross this weekend (a 25% increase from last weekend) and a per theater average of $2,808. Look for this one (which has now grossed $6.99 million domestically) to go into wide release this coming weekend, likely to coincide with a number of prospective Oscar nominations.

One last thing; The Masked Saint, a Christian film featuring "Rowdy" Roddy Piper, was released by Freestyle Releasing on Friday in 480 locations. Deadline reported on Saturday that it grossed about $41,000 on Friday, which would amount to an anemic $85 per theater average on opening day. Neither Deadline nor the Exhibitor Relations Twitter page nor Box Office Mojo have reported the films opening weekend gross at this time, Deadline did estimate it would make a minuscule $131,000 for the weekend, which would result in a per theater average of just $272. Looks like Freestyle Releasings newest attempt to tap into the Christian film market and replicate the success of their 2014 film God's Not Dead has gone awry, just like all the other post-God's Not Dead Christian films they've tried to turn into box office success stories.

The Top 12 this weekend grossed a strong $144.7 million, which is the second biggest haul ever amassed for this particular weekend (the second weekend of the year) in history, only behind the $148 million haul accumulated five years ago when Avatar was ruling for the fourth weekend in a row. Needless to say, this weekend was also up a whopping 31% from this weekend last year when Taken 3 was the number one film in America.
Posted by Douglas Laman (NerdInTheBasement) at 11:59 AM