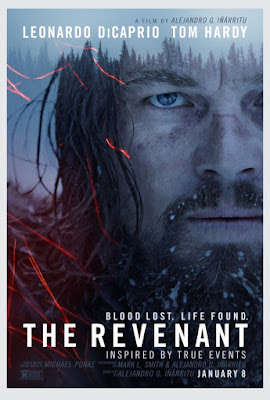 Tales about the hostility of nature have existed in the spectrum of storytelling for an eternity a day, and the same goes for stories revolving around the concept of vengeance. The Revenant isn't the first motion picture to combine both concepts, and I can guarantee you it won't be the last. It does separate itself from the pack though by setting its plot in the 19th century, an era where man had come to inhabit numerous parts of America, but there was still much of the country uncharted by American individuals. This land was crawling with danger, animals ready to kill at a moments notice and Native Americans none too pleased with the concept of more white people invading on their turf.

At the center of all this chaotic wilderness is Hugh Glass (Leonardo DiCaprio), a member of a group of pelt traders (one other member of the group is the son of Hugh, Hawk, played by newcomer Forrest Goodluck) who endure all the savagery the outdoors have to offer. One such barbarous element of this domain that Hugh encounters is a grizzly bear, which proceeds to maul him. Carrying his carcass across the terrain proves to be for the crew, and soon, fellow pelt trader John Fitzgerald (Tom Hardy) leaves a feeble Hugh to die in the wilderness.

Of course, Hugh ain't down for the count just yet, and soon he's off trying to survive in the woods while his lust for vengeance against John festers. It's a pretty basic set-up to hinge a film on, and the good news is that The Revenant seems to recognize its more straightforward narrative and executes it in a way that places on emphasis on the character of Hugh instead of trying to compensate for the more unembellished story-line via devices like extraneous gratuitous visual flourishes. This is plainly the tale of a man who hides in horse carcasses to survive in the snow covered territory he finds himself in, and The Revenant is smartly aware of that.

Surrounded by gorgeous looking snow-covered scenery, Leonarod DiCaprio equips himself well to the more arduous role ahead of him, one that requires him to have, at one point in the story, injuries so severe that he can't even speak. Even in these portions of the film, DiCaprio manages to get even the most basic facial expressions to say a gargantuan amount of words. Once he becomes a bit more mobile, he doesn't lost that ferociously tenacious body language so commanding it seems to pulsate across the screen. Frankly, there are parts of this story where the sight of seeing Hugh once again waltz into "death-defying" danger teeters on becoming repetitive, but thankfully DiCaprio is doing a good enough job playing this damaged but determined individual to make those feelings fleeting.

Our lead actor finds himself constantly at the whims of an exterior environment as relentless as it is beautiful. Make no mistake too, this is one gorgeous looking movie, and that level of visual grandeur even manages to work in favor of enforcing the brutality of the world Hugh is stuck in. Juxtaposing such beautiful imagery with instances of unsettling violence (which there is a bunch of, particularly in an intense opening sequence involving Hugh Glass and his fellow pelt traders being attacked by Native Americans) makes it plainly clear how unforgiving and unpredictable the world this film depicts is. Oh, and aside from the underlying nuance garnered from these kind of shots, all of those instances of stunning visuals allows  Emmanuel Lubezki to kick serious ass in his duties as the cinematographer on The Revenant.

Ah, but the landscape and DiCaprio aren't the only individuals playing a major role in this story. In fact, in terms of critical importance to the overall plot, Tom Hardy as John Fitzgerald is the most crucial figure in this feature that isn't named Hugh Glass. Considering his essentially to this tale, I wish Fitzgerald was a bit more nuanced, especially when it comes to his tonally ill fitting dialogue, which feels so simplistic it feels like it was plucked out of a different film all together. In a film as somber as The Revenant, Fitzgerald just doesn't come together in a satisfying fashion. Pity, since Hardy puts in good work playing the fellow, and I found his Jeff Bridges inspired accent for the character to be mighty fine to listen to.

There's nary a silver lining of morality to be found in the world of The Revenant. Director Alejandro Gonzales Inarittu goes full steam ahead in depicting this land entrenched in degeneracy stemming both from the environment and the people that inhabit such a terrain. Plopping a conventional revenge plot into the confines of this milieu proves to be a smart move that allows pros like DiCaprio and Lubezki to strut their stuff and show off why they're so beloved. Good luck finding any semblance of serenity in The Revenant and the same can be said for trying not to get wrapped up in its simple age-old story told in an engaging manner.
Posted by Douglas Laman (NerdInTheBasement) at 7:35 PM