The Saddest Part About Rey Not Being A Part Of The New Star Wars Monopoly Game? It's Not Surprising 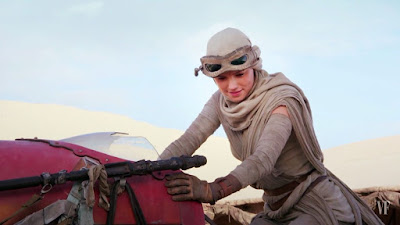 Perhaps one of the biggest surprises of Star Wars: The Force Awakens was the lead character of this new trilogy of Star Wars films, Rey. Despite both her and Luke originating from desert planets, she's quite a different beast than that blue milk sipping fellow played by Mark Hamill. Whereas Luke was marked by his quaint life not too disimilar from what was seen as the conventional traditional American family unit in the 1970's (i.e., mother, father, off-spring, farming), Rey was left too fend for herself on the desert planet of Jakku. This lifestyle created a fascinating mental dichotomy where she's extremely self-sufficient (she can scavenge for parts from crashed ships like no one's business), but also held back by clinging to the hope that the parents who abandoned her on this planet long ago will come back for her. Even when Han Solo offers her a job like no other, to help on the Millennium Falcon, (because, after all, Chewie kinda likes her), she reluctantly declines. She simply has to return home to Jakku, she has to be there in case her parents come home.

By the end of her first adventure, she's managed to let go of the past in order to have a more productive future with the likes of Luke Skywalker. Like I said, this is an endlessly riveting creation, one that Daisy Ridley plays perfectly and an individual I could easily see having endless possible interesting story routes for her to go down as this series progresses. So, uh, considering all her cool skills....how come Rey is so hard to find on merchandising for The Force Awakens? Numerous stores have noticed a dearth of apparel related to her (my brother worked in Target over the holidays and one of the items he got asked about the most was toys related to Rey), but now such a controversy has reached its apex as a new Monopoly game from Hasbro has excluded Rey from the proceedings, not including her as a playable character in the game.

Hasbro has officially released a statement on this matter, saying that the reason she isn't part of the game is because of them wanting to avoid spoilers, specifically the reveal that she joins the Rebel Alliance and fights Kylo Ren. My response to this can best be summed up by Mr. Bill Nye The Science Guy:

How would it be a spoiler to have Rey in this game as simply a playable figure? You don't have to involve exact plotlines from the film in a freaking Monopoly game, she can just be a "good guy" character potential participants in this version of Monopoly have to choose from. Plus, while trailers and posters prior to the release of The Force Awakens don't show her climactic duel with Kylo Ren, they do show her fighting antagonistic figures, so it's not exactly a secret that Rey would be a *GASP* protagonist in the plotline. Not helping matters it that the four figures currently in this version of Star Wars Monopoly are Kylo Ren, Finn, Luke Skywalker and Darth Vader. Notice how there's no women in that group. Ya couldn't swap out young Luke for Rey? C'mon Habsro!

Perhaps what's most disheartening about this whole development is that, at this point, it's becoming more and more shocking that massive toy companies like Hasbro don't see that omitting female characters from merchandise like this in the past has drawn considerable ire. Good luck finding Black Widow on the majority of Avengers merchandise, and the same goes for Gamora on Guardians Of the Galaxy shirts, pillows, cups, etc. Toy companies seem to think the likes of Star Wars and Marvel are boys only merchandising entities, and that no boy is gonna buy a piece of apparel with a girl on it. Never mind that that the female characters they're omitting are featured prominently in a movie this intended boy buyer enjoys enough to want to buy related merchandise from it.

See how this all makes no sense? Yet, there goes this new Monopoly game, as well as other crucial facets of the Force Awakens marketing, underplaying Rey as if she doesn't even exist. Plus, considering that The Force Awakens, which stars a woman, is well on its way to becoming the highest grossing movie of all-time, it feels like the merchandise (like this Monopoly game) for this movie is not only out of step with gender representation but also out of tune with pop culture as a whole. I wish I could say that the outcry over this means it'll be the last time women are eschewed on merchandise for what are typically seen as "movies for boys", but I have a hunch it won't be.

I'm sure Black Widow, Agent 13 and Scarlet Witch will be nowhere to be seen on Captain America: Civil War merchandise, Uhura will have been beamed away from all Star Trek Beyond toys and there probably won't even be merchandise created for the new Ghostbusters film. I hope articles like this can help inspire recognition for this ongoing problem, but let's also remember to get our voices heard via our wallets. Refusing to pick up merchandise related to these major features that are devoid of female characters could be the most effective way to signal to these corporations the shocking truth that maybe, just maybe, giving women representation on this kind of apparel won't be the end of the world.
Posted by Douglas Laman (NerdInTheBasement) at 1:01 PM