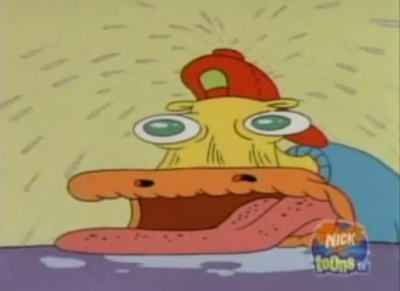 As a kid, when it came to youth friendly animated programming, I was always more of a Disney kid, with stuff like TaleSpin, DuckTales (a-wooo!) and Darkwing Duck being my bread & butter. Of course, I was acutely aware of the animated shows over on Nickelodeon, dubbed NickToons, but their more abrasive nature (and the fact that the voices on Rugrats always irritated me) rubbed me the wrong way at an early age. I will say though I do love Rocko's Modern Life, and of course, SpongeBob SquarePants, which arrived at the tail end of the 90's and the NickToons era.


Cut to 2016, and Nickelodeon is looking to cue their viewership woes (they're desperately lacking a show like Adventure Time, Gravity Falls or Regular Show that gets people talking) by embracing nostalgia for the 90's, with their spin-off network, TeenNick, devoting eight hours of programming at night to The Splat, a block of 90's shows like Ren & Simpy, CatDog and Hey Arnold! Now it appears they're taking their love for this era and these shows one step further by getting a feature film made that unites all of their most well-known icons into one feature film.

Yep, Paramount Pictures & Nickelodeon Movies are commencing on a film entitled NickToons, a feature that will bring a multitude of Nickelodeon legends together, and I assume they'll also enter the "real world" ala Fat Albert, The Adventures Of Rocky & Bullwinkle, The Smurfs, etc.. Jared Hess (the director of Napoleon Dynamite and collaborated with Paramount and Nickelodeon on Nacho Libre) has been set to direct and writer, the latter task he'll do with his wife Jarusha Hess. I'm not exactly sure even ardent fans of this show were hoping for a movie about Tommy Pickles and The Angry Beavers rubbing shoulders, but there's probably enough nostalgia for these shows for this to be a financially lucrative venture for Nickelodeon. Will it actually be any good as a piece of individual storytelling? That's another matter entirely, though I would be lying if I said I wasn't at all looking forward to seeing a 50 foot tall Filbert the turtle on the big screen aching "I'm nauseous!"

Hey, uh, studios, if we're gonna be bringing back any animated shows from the 90's, can we please get Darkwing Duck back in production? Or hell, flashing forward a decade, how about you just call me beep me if you wanna reach me to tell me you're bringing back Kim Possible!
Posted by Douglas Laman (NerdInTheBasement) at 6:49 AM