New Trailer For Suicide Squad Begs The Question...Whose The Real Criminal? Us? Or The Man Gobbling Crocodile Monster? 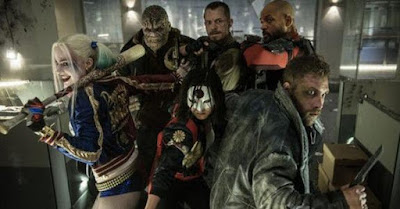 Last night, DC Comics aired a TV special designed to promote their forthcoming films in the DC Extended Universe, a sprawling cavalcade of films starring spandex wearing individuals that's basically Warner Bros. answer to the Marvel Cinematic Universe. Along with new footage of Batman v. Superman and a sneak peek at Wonder Woman (the latter of which has some surprisingly polished looking footage considering its only been filming for two months), there was a new trailer for Suicide Squad, the David Ayer directed feature about various incarcerated bad guys from DC Comics lore being recruited for a dangerous government mission.

Check out the trailer below!

Did...did Jai Courtney just make me laugh? His "sneaking in a sip of booze" was so well executed and surprisingly humorous, maybe I misjudged the dude!

So yeah, this is a pretty damn good trailer, one full of energy, vibrant colors and fun, the kind of elements fellow 2016 DC Comics film Batman v. Superman has been sorely lacking in its marketing campaign. There's an oddly delightful undercurrent of nastiness in this trailer, one boosted by the surprisingly effective use of a "little-known" Queen song Bohemian Rhapsody. But really, the MVP of this trailer is Margot Robbie, who seems to be having a ball as Harley Quinn. Her extended line about the voices in her head was the biggest laugh of the trailer, and that level of fun coming from her characters actions and dialogue is a primary reason why this trailer works so well.

One major quibble though; the hell is up with the female supervillain costumes in this movie? Look, I knew Harley Quinn was always gonna be decked out in short-shorts and what have you, I'm not saying that's good, but it's at least not shocking. But how on Earth did The Enchantress go from donning a green robe to a metallic bikini? Why does Katana have a midriff? What purpose does that serve in combat? Oh wait, I remember now, we can't have our female characters dress like (GASP!!!) people, now would we? Christ, everything else visually in this movie looks so interesting (there's even bright colors in the title treatment!!) and then those costumes pop up and get my blood boiling again. Not only are they dehumanizing to the actors wearing them, but they're also just lazy designs in and of themselves.

That's a major flaw keeping me from getting full on amped for Suicide Squad, but I gotta say, this is one mighty fine trailer that establishes a unique atmosphere full of grime, darkness and fun. Hell, even Jared Leto as The Joker (whose "damaged" forehead tattoo isn't visible in this trailer) works better in the format of a trailer instead of those abysmal photos released of him last year.
Posted by Douglas Laman (NerdInTheBasement) at 10:14 AM