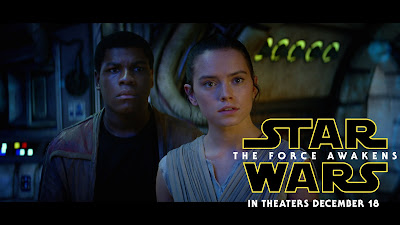 Another week, another opportunity for Star Wars: The Force Awakens to break some more box office records. Scoring the biggest New Years Day gross as well as by far the larger third weekend on record, Star Wars: The Force Awakens took in $88.3 million over the weekend, a 41% decline from last weekend. It has now reached $700 million in record time, in just 16 days. For comparisons sake, Avatar took 72 days to reach that mark. This J.J. Abrams feature has now taken in $740.2 million, and is currently the second biggest movie of all-time unadjusted for inflation. It'll overtake domestic box office champion Avatar likely on Tuesday, its 19th day of release. It's also now taken in $1.51 billion worldwide, putting it just behind Furious 7 and The Avengers on the biggest movies of all-time worldwide. And it hasn't even been released in China yet!

Judging by this weekend, where exactly is The Force Awakens gonna conclude its incredible domestic performance? Depends on how it holds in the next few weeks, though it's obvious that there's good word-of-mouth floating around for the film and it won't much in the way of competition in the next few weeks. I'll say a gross hovering around $930-945 million, though some solid dips in the weeks to come could make $1 billion a legitimate possibility. Currently, by the by, the $740.2 million cume of The Force Awakens put it in the 23rd spot of biggest movies of all-time adjusted for inflation, just behind Raiders Of The Lost Ark and The Sting as well as only $37 million behind the adjusted for inflation cume of The Phantom Meance (yes, that gross includes the cash it accumulated in its 2012 3D re-release).

In second place was Daddy's Home, which lost a tiny 25% from last weekend for a second weekend haul of $29 million, and has now grossed $93.6 million domestically in just 10 days. It's already surpassed the lifetime domestic cume of Will Ferrell's other 2015 comedy, Get Hard, and will become the actors seventh movie to gross over $100 million domestically sometime during the week.

Looks like no griping from flustered police unions couldn't damper the box office performance of The Hateful Eight, which did solid business over the weekend to the tune of $16.2 million, and has now grossed (counting its 5 day long 70mm exclusive run) $29.3 million. This is obviously a much lower opening weekend than the last two Quentin Tarantino films, Inglourious Basterds and Django Unchained, which both got over $30 million in their debut weekends, but The Hateful Eight was a smaller scale affair that didn't need an opening of the scale considering its more modest $44 million budget. This one's gonna suffer a huge drop next weekend when The Revenant goes into wide release, though it wouldn't be shocking to see it fare decently in the weeks afterwards and end up with a $55-60 million domestic gross.

Sisters continued its strong box office performance by losing only 11% from last weekend for a $12.5 million third weekend and a 17 day domestic total of $61.7 million. Interestingly, it looks like Tina and Amy will be outgrossing every other comedy in 2015 sans Pitch Perfect 2, Daddy's Home, Spy, Trainwreck and Get Hard. Right behind em in fifth place was the newest Alvin And The Chipmunks feature, The Road Chip, which added another $11.8 million to its box office run this weekend that's up to $67.3 million. Interestingly, Joy in sixth place had a steep (for this kind of holiday timeframe) 39% dip this weekend, resulting in a $10.4 million second weekend cume and a ten day total of $38 million.

The Big Short in seventh place had a small 11% drop for a $9.4 million second weekend, resulting in a $32.9 million domestic total so far. Interestingly, out of the three dramas that opened on Christmas Day in 2015 (Joy, The Big Short and Concussion), it looks like The Big Short will be the highest grossing of the bunch despite not having the star power of actors Jennifer Lawrence and Will Smith. Speaking of Concussion, it lost 22% this weekend for an $8.3 million second weekend and a 10 day total of $25.6 million.

Point Break shed 31% from its opening weekend for a second weekend cume of $6.5 million and a 10 day total of $22.1 million. And in tenth place was The Hunger Games: Mockingjay: Part Two, which saw a 10% decline in its seventh frame for a $4.7 million cume and a current domestic total of $274.3 million. The Good Dinosaur came in eleventh place this frame, actually increasing 6% from last weekend for a $4 million cume this weekend a current lifetime gross of $114.7 million. Creed also managed to crack $100 million this weekend with its $3.9 million sixth weekend gross (only a 12% drop from last weekend) for a current domestic cume of $103.4 million.

A number of smaller releases this weekend saw impressive increases this frame, starting with The Danish Girl, which only lost 2% from last weekend for a sum of $1.5 million and a total domestic gross of $6 million. Right behind it in fourteenth place was Brooklyn, which has been an impressively steady performer in limited release over the last few weekends and added $1.3 million (a whopping 21% increase from last weekend) from only 285 locations for a great domestic total so far of $20.8 million. Carol, in fifteenth place, was up 11% for a haul of $1.2 million from 189 locations for a per theater average of $6,429 and a total domestic gross so far of $5 million. Finally, Spotlight, in its ninth week of release, continued to leave its mark, collecting another $1.2 million (an 11% increase from last weekend) for a current domestic total of $27.1 million.

The Top 12 this weekend grossed $204.6 million, up about 56% from the same weekend last year when the final Hobbit movie was king of the box office for one more week. It's also the second biggest January weekend of all-time, only behind the first weekend of January when Avatar ruled and also had New Years Day fall on a Friday.
Posted by Douglas Laman (NerdInTheBasement) at 10:58 AM