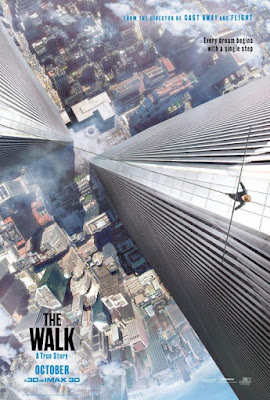 October 2015 may go down in the history books as the "Dramatic Movie Massacre", a period where a horde of dramatic features debuted in a short window of time and basically trampled on each other, reducing the majority of the movies released in this time period to being major box office duds. Two of my favorite films of last year (99 Homes and Steve Jobs) ended up tanking big time thanks to the insane amount of competition, and one other victim of this brutality was the newest endeavor from director Robert Zemeckis in his 37 year long career in Hollywood.

The movie in question was The Walk, which became the second lowest grossing film domestically ever for Zemeckis. Of course, a features box office rarely correlates to its quality (Scott Pilgrim vs. The World is a masterpiece, for instance, yet underwhelmed significantly in theaters). and thankfully, The Walk proves to have more to offer than just being a notable box office misfire in 2015. In fact, it's a regularly endearing story told with visual aplomb, the kind that utilizes special effects to advance the characters instead of putting the fancy-schmancy computer tools before everything else.

Robert Zemeckis has had a large share of experience with features that manage to combine interesting characters and terrific visual effects, most notably in classics like Back To The Future, Who Framed Roger Rabbit and Forrest Gump. His newest yarn focuses on Philippe Petit (Joseph Gordon-Levitt), a French man who finds the most serenity when he's accomplishing the impressive feat of walking across a wire. While Levitt makes the undaunted (glaringly huge obstacles be damned!) personality and French accent of Petit work, I do wish the script had spent a bit more time showing him hone his skills as a tightrope walker.

Petit basically attempts this feat in public twice (one of those tries occurs across the Notre Dame de Paris) over the course of  five minutes within the film, and then he's raring to go to take his skills to the next level: walk across the two newly built Twin Towers (the majority of this story takes place in the year 1974). Still, once we arrive in New York City, The Walk really hits its stride, since, in order to pull off what Petit dubs "the coup", he'll need to assemble a team of accomplices to help him get into the Twin Towers as well as set up the wire he's gonna walk on. This is where The Walk makes the brilliant idea to take on the trappings of a heist movie, complete with rapid-fire editing, a memorable ragtag group of individuals assisting our hero and a score (done here by regular Zemeckis collaborator Alan Silvestri) that helps sell the intensity and unpredictability of their mission.

Utilizing the idiosyncratic traits of heist films for this section of the plot proves to be a great way to let the memorable group dynamics emerge as well as create a mounting sense of importance to the endeavor (Petit walking between the dual buildings) they're all preparing for. One thing that can be said for Zemeckis (and this is coming from a man who can say that The Polar Express is one of the most traumatic theatrical experiences of my life) is that he knows how to craft an engaging sequence thriving on spectacle while not forgetting that human beings with noteworthy personalities have to inhabit all of that grandeur.

That gift of his makes him a perfect director to orchestrate set piece The Walk hinges on, where Petit finally steps onto that high wire and begins to make his intrepid trek across the sky. The score by Silvestri kicks in and then the exhilaration Petit feels in this very moment immaculately resonates with the audience. I'm sure in its IMAX 3D presentation this particular scene was borderline mind-blowing.  It takes real dedication to pull off a scene like that, the kind of dedication that drove the creation of two buildings that, at the time, were the largest in the world. Or, alternatively, that sense of resolve that can make a man walk above the clouds and inspire a city.
Posted by Douglas Laman (NerdInTheBasement) at 4:00 PM