Michael Bay Is Doing Transformers 5....But He Can Quit Anytime He Wants, Don't Worry 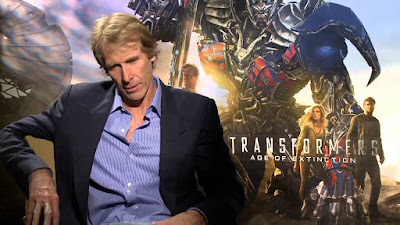 Over the next 12 months, Paramount Pictures is releasing a number of movies from a veritable who's-who of well-known filmmakers. Features from the likes of Charlie Kaufman, James Gray, Denis Villeneuve, Robert Zemeckis, Richard Linklater and Martin Scorsese will all receive wide theatrical releases from one of the biggest movie studios on the planet. At the same time, this very same company is responsible for enabling Michael Bay to churn out wretched Transformers sequels, over and over and over again, to the point where I feel like Tom Cruise in Edge of Tomorrow, repeating the same goddamn events relentlessly.


And, yes, this is all a long-winded way of noting that, yesterday, Michael Bay confirmed that of course he'll be back for more Transformers nonsense. After asking in an incredulous manner if they were truly on the fifth Transformers movie, he did indeed note that he'd return to this massive franchise, excuse me, cinematic universe, and that this would be the last time he will participate in the franchise. Because he's never ever ever said that before, right?

At this point, it's easy to see why Bay keeps doing these movies, and I can't really blame him for saddling up for these films considering the hefty paychecks he gets paid every time he steps behind the camera. Plus, in between each Transformers film, he gets to create smaller scale R-rated features like Pain & Gain and 13 Hours: The Secret Soldiers Of Benghazi. So, the dude gets tons of cash and the ability to have Cate Blanchett, er, carte blanche, to make any films he chooses when he's not bringing the Autobot/Decepticon war to life. So, despite my seething hatred for Transformers: Age of Extinction, I guess I'll just be happy for Bay having some level of creative and financial fulfillment stemming from these wretched Transformers sequels.

Now, instead of dreading the yearly Transformers continuations the forthcoming Transformers Cinematic Universe will deliver, I think I'll just get excited for all those awesome sounding future Paramount distributed projects I was talking about at the start of this article. Man, Silence really sounds like the bee's knees!
Posted by Douglas Laman (NerdInTheBasement) at 9:15 AM