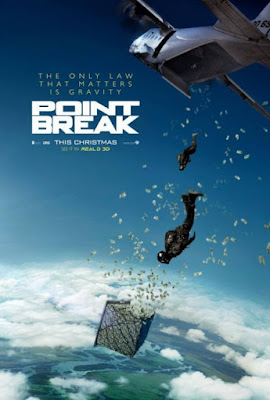 Every speck of sand on those dunes glistens in the unbearable heat, as two individuals on motorcycles ride on up, stop and proceed to take off their helmets. One of these men is Johnny Utah (Luke Bracey), an extreme sports connoisseur addicted to dangerous thrills and a major celebrity on YouTube. The other fellow is a good friend of his who may as well be named Won't B. Aroundforlong, since his demise is all but certain the moment he begins a conversation with Johnny regarding how dangerous this stunt they're about to attempt is.

Johnny says it isn't that dangerous bro, but he's so so so wrong, since Won't B. Aroundforlong fulfills his destiny and soon dies in a poorly edited fashion. This event proves so traumatic that Johnny becomes an FBI agent and then utilizes his expertise in the world of extreme sports to go in undercover and infiltrate a group of extreme sports athletes, led by a man named Bodhi (Edgar Ramirez), using their death-defying stunts to commit robberies in the name of a spiritual quest that'll supposedly lead to enlightenment.

A premise that nonsensical is not the kind of concept one can play all that seriously, and yet, that's just what Point Break does, treating every one of its senseless plot points with all of the dramatic heft of Shakespeare. There's very little time for fun or thrills in this film, which becomes a problem considering that all of the attempts at spectacle come up as severely underwhelming. To be fair, the extreme sports segments of the motion picture are at least well-filmed, but those quickly become repetitive given that there are no interesting characters to latch onto in these sequences.

Just as aggravating as the lifeless characters is the overlook look of Point Break, with every frame being drenched in a green hue that provides nothing to the overall feature besides being an irritating distraction. If director Ericson Core was trying to make some sort of thematic point with the movies visual aesthetic, but good Lord, the inescapable green tint is just hideous to behold. I'm not sure if I've made this clear enough, but there's very little in Point Break that rises to the level of "tolerable", and it's no exaggeration to say that, long before the credits roll, the feature becomes an immense slog to get through. By the time my screening of the film concluded, I was left wishing I'd taken a cue from Won't B. Aroundforlong and left the movie very very early on.
Posted by Douglas Laman (NerdInTheBasement) at 2:28 PM