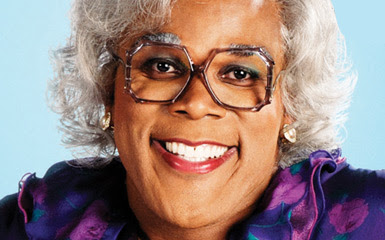 Remember the Chris Rock film Top Five? Well, at one point in the film, the poster for a film entitled Boo! A Madea Halloween is shown, as well as a long line of patrons eager to see the motion picture. It was a humorous little moment that had faded from my memory...until yesterday when it was announced that Tyler Perry would be ending his two years hiatus from directing (his last film was the March 2014 effort Single Mom's Club) to make that parody poster into a real feature film. That's right folks, Boo! A Madea Halloween is coming to a theater near you on October 21, 2016.

I've never seen one of Tyler Perry's directorial efforts, and the extremely negative reviews for his work (Nathan Rabin's zero star write-up on his voyage into A Madea Christmas, which apparently has a scene of Larry The Cable Guy engaging in ghost sex, is a masterwork of weary  befuddlement). The mans work as Madea apparently has a sizable and reliable fanbase judging by how each of the Madea films over the last 11 years has managed to gross over $50 million. I'm sure this one will follow suit, though I must say I'm disappointed that Perry didn't take advantage of this being an election year and instead make Madea For President! in 2016 instead.

Boo! A Madea Halloween is already filming and co-stars Bella Thorne, Cassi Davis, Andre Hall and Patrice Lovely. The plot apparently will deal with, according to Lionsgates official statement on the film, Madea "...fending off killers, paranormal poltergeists, ghosts, ghouls and zombies while keeping a watchful eye on a group of misbehaving teens." If I were to wager, I'd guess Thorne plays one of those teenagers who doesn't like Madea at the start of the story, but then grows to appreciate her presence after a night of fighting all sorts of monsters. Looks like, in addition to his duties as an Oscar host and the voice of a zebra, Chris Rock can add "inspired a Madea movie" to his lengthy resume.
Posted by Douglas Laman (NerdInTheBasement) at 11:16 AM