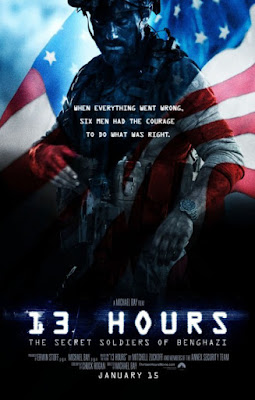 In the pantheon of Michael Bay movies, 13 Hours manages to land on the higher end of his filmography. It lacks the sprawling idiocy of Pearl Harbor and the incoherency of the Transformers sequels, and eschews the stupid sophomoric humor that tends to drag down his features. In the grand scheme of cinema, 13 Hours registers as nothing more than "inoffensive" and "OK", but, credit where credit is due, Bay has kept some of his more distracting directorial traits on the sideline for this motion picture in order to tell this real life story.

Now, rest assured, while product placement and shots of ogling women don't figure prominently into the movie, other recurring aspects of the mans work as a director slither their way into 13 Hours. Green and yellow manage to figure heavily into the color palette of 95% of the shots seen on-screen, while rapid-fire editing is also employed (though, to be fair, the latter element isn't nearly as grating as it was in, say, The Rock). And of course, Bay loves the military, making him a "well duh" choice to direct this film even if he hadn't been working with Paramount Pictures (who funded and distributed 13 Hours) on numerous projects over the past nine years.

The real life story he's adapting (from a screenplay written by Chuck Hogan) concerns that of a small group of soldiers attempting to rescue a US ambassador under attack in Libya, Benghazi. No reinforcements are coming in to help these guys, so it's solely up to them to take care of the situation and survive the whole ordeal. When it comes time for these soldiers to pick up their weapons and engage in combat, there's no denying sequences depicting such actions are extremely well shot and appropriately terrifying. Thankfully, Bay learned from his last feature based on real life events, Pearl Harbor, to not make action that we the audience should be terrified of "kewl".

Instead, there's an appropriate sense of despair and chaos conveyed through the grisly violence these soldiers endure. An emphasis has been placed on the shock, while the awe has been set to the side. However,the barrage of gunfire can't help but feel lacking when taken as a whole, primarily thanks to the characters engaging in this combat being severely underdeveloped. A few of them are given one-note traits (one of the soldiers is particularly beholden to theological quips, one has a dog and girlfriend to go home to), while the rest are depicted in 13 Hours as cannon fodder to be mowed down in the climax.

Part of me wishes there had been more depth given to the figures we spend the entire movie with, and then I'm reminded of a scene where our protagonist, Jack Silva (John Krasinski), calls his wife, whose stuck in the line at McDonalds, and oh God, the clunky dialogue and erratic pacing of the sequence comes rushing back to me. Looks like either way, 13 Hours was doomed in this department, not helped by the fact that Krasinski and the other actors in the film (which includes James Bridge Dale, Pablo Schreiber and Max Martini) seem more lost than anything else for the majority of the story. Krasinski in particular struck me as uber bland in the film, his macho personality and beefcake physique (seriously, I need this guys exercise regime, dudes got more abs than I have fingers!) seemingly standing in for an actual personality the audience can latch onto.

When we all heard that Michael Bay was making a Benghazi movie, we all had a good chuckle about this being a real film, but somehow, 13 Hours rises above being a punchline. The actions well staged enough, the 144 minute running time surprisingly doesn't feel elongated, and, whaddya know, there's even some flashes of nuance buried within the running time. If nothing else, for those like me that find the career of Michael Bay to be a fascinating beast, 13 Hours serves as an intriguing examination of a film that's somehow far more different (a more somber tone, with no stupid jokes or ogling women as far as the eye can see) and yet so similar (lots and lots of explosion) to his past endeavors.
Posted by Douglas Laman (NerdInTheBasement) at 10:52 AM