EXCLUSIVE! Read A Scene From The Next James Bond Film, The Hildebrand Rarity 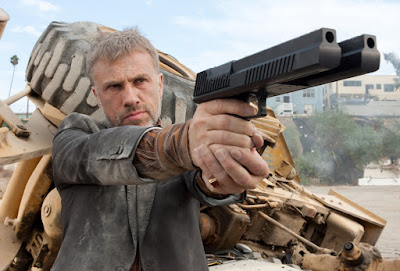 SPOILERS FOR SPECTRE AHEAD


This morning, a British tabloid reported that Christoph Waltz will return to the James Bond franchise, but only if Daniel Craig were to return. Thanks to me insisting to an MGM executive at an airport that the suitcase I had was in fact mine and not his (I was wrong, it was his), I have come into possession of a number of highly sought after scripts extremely anticipated MGM sequels, including R.O.T.O.R. v. Police Cap Robot Cop: Dawn of Establishing Shots, Bio-Dome 2 and the next James Bond film, which is being written with Craig and Waltz being eyed to reprise their roles. This next 007 feature is being tentatively entitled The Hildebrand Rarity and, for your pleasure, I have transcribed a scene from the motion picture below.

INT. OFFICE- DAY
James Bond is being held hostage in a chair. Suddenly, Blofeld waltzes (no pun intended) into the room. He's got a smile on his face like he just got done winning two Oscars. He lets out a small cackle as he stands in front of Bond.

Blofeld
And now, Mr. Bond, you shall die, the end of a glorious reign that...well,
perhaps the word glorious is much too generous. You see, I found you to
be far more like the tick that won't stop sucking the blood from my neck. You're
a pestering little fool....but not for much longer!

James Bond
Wait, hold up a second, weren't we brothers in the last movie? And you
hated me because your Daddy loved me? And then you killed him
in an avalanche? And then you were somehow behind every goddamn
bad thing that happened to me in the last few films even though there
wasn't even a hint of there being some larger mastermind in place
in prior motion pictures?

Blofeld
SHHHHHHHHH!! We are not discussing that!

Blofeld then proceeds to take out a big-ass gun and cackles with glee.

Blofeld
This gun will reduce you to nothing but ash and memory in
mere seconds.

James Bond
OK, hold on, I'm still trying to gather my bearings. Didn't you have
a white cat in the last one? A cat that I guess died when we blew up
this base? That poor cat! He didn't do anything!

Cut to a close-up shot of Blofeld, his eyes caught in a dark glare.

Blofeld
You're right. That cat did do nothing.

Blofeld then reaches up behind his neck, as the noise of a zipper being unzipped echoes through the chamber. Suddenly (prepare your jaws to be dropped), Blofeld unzips himself, revealing his body to be nothing more than costume, concealing...a cat! Yes, the Persian cat on stilts is really Blofeld! The feline then begins to speak, still with the voice of Christoph Waltz of course.

James Bond
That is the absolute worst cat name I've ever heard.

Blofeld Cat/Paw Solo
SHUT UP!!! Anyway, Blofeld treated me as poorly as any cat owner.
My head remain unscrathed, my little box unchanged, I didn't even
have a scratching post to my name! So I killed him and took up his
identity! I would be a better man than he, I would be a Blofeld for a
new age! I would...

James Bond
See, all this is referred to in basic screenwriting courses as motivation.
Why your owner had none of that in the last movie boggles my mind.

Blofeld Cat/Paw Solo
Hey, if you don't keep your trap shut, I'll shed all over you man. Just
watch.

James Bond
I really don't have time for this. I've got a tennis game with Eggsy and
the Kingsman at two O'clock sharp.

Blofeld Cat/Paw Solo
Ah, soon, but oh so soon. This cat will catch its prey, pouncing on him when he
least suspects. His flame shall flicker from existence, vanishing without
a singular piece of noteworthy evidence that it ever even was. And then, once I
have vanquished 007, done what my repellent master never could, I shall finally become...

It is here that our feline antagonist puts on sunglasses