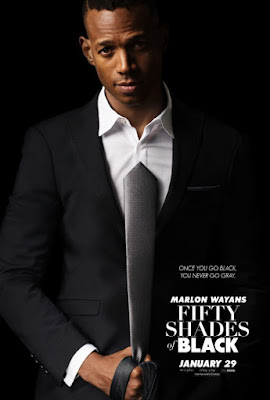 Hey, you know what I got obsessed with this past week? Hamilton! Yeah, thanks to this handy-dandy YouTube playlist, I was able to listen to this Broadway shows soundtrack over the past few days and it is some incredible stuff. There's nary a dud tune in the bunch! What a great idea for a show, taking these well-known real life figures from history and reminding us all they were more than just aspects of our history textbooks, they were human beings. Oh, and those last two songs, The World Was Wide Enough and Who Lives, Who Dies, Who Tells Your Story? Absolutely incredible way to end the whole affair, on an emotional note that really put the events of the show into a larger perspective.


Why do I bring up this show now? Well, I wanted a flicker of positivity to be found in this review, because there's really nothing good I can conjure up to say about Fifty Shades Of Black, a comedy that somehow forgot to add in that crucial ingredient of successful jokes. Call me crazy, but I tend to think those can be kind of important in a movie solely designed to make one laugh. Who knows if actually making something that works as a functional comedy was the intent behind writers Marlon Wayans and Rick Alvarez when they were brewing up this feature film. After all, the sloppy writing is best summarized by a bewildered remark uttered by Wayans himself during this movie; "Did a 3rd grader write this?"

In this "comedic" (reeeally stretching the definition of that word there) of the 2015 feature film Fifty Shades of Grey, Hannah (Kali Hawk) is a shy virgin whose off interview Christian (Marol Wayans), who steals things and sells drugs. Good God, do I hope Hawk was paid well for her work here, since 95% of the dialogue in the movie revolves around characters insulting her physical appearance and belittling her for extended periods of time. Punchlines about her belly button, leg hair and her nose get brought up so many times despite not being even remotely funny the first instance they crop up.

Now, this is the kind of movie that doesn't seem to realize that the jokes it keeps repeating over and over again are painfully unfunny and don't get any funnier when they go on for an hour and a half. And when I say the majority, if not all, of the jokes in Fifty Shades of Black are painful to experience, I do mean the word in its purest form. Some of the extended gags in Fifty Shades Of Black are so tortuously stretched out and repeated that describing them as "excruciating" would be kind. OK, so, anyway, the rest of the plot revolves around Christian and Hannah having sex, and...that's kind of it. There's not really a concrete story to be found in in this film, which doesn't even try to make transitions between dick joke #354 and dick joke #355 somewhat smooth. There's even an extended sequence lampooning Magic Mike that serves zero purpose to the plot, only allowing for the sight of Wayans in a thong and to afford his CGI genitals the chance to dance around within that piece of attire. Basically, not only is there a distinct lack of an actual plot in Fifty Shades Of Black, this is a movie so full of contempt for its audience it doesn't even try to act like it has a story to tell. "Just shut up and laugh at the jokes about fat women" might as well be the poster tagline.

If there's one element in Fifty Shades Of Black that can be described as particularly deplorable (and that's saying something in a movie this deficient), its Wayans performance as Christian, whose character arc in the feature comprises entirely of him starting out as obnoxious and gradually, over the course of the story, ending up as insufferable. It's fairly apparent that Wayans is looking to turn in the creepy tendencies of Christian Grey that Fifty Shades Of Grey played straight in a more exaggerated manner, perhaps in an attempt to highlight just how disturbing Christian Grey really was. Unfortunately, none of that comes through in his performance, which instead reaches its own personal heights of unintentional creepiness full of eldritch tendencies the film seems completely oblivious to.

Perhaps the best thing I can say about Fifty Shades Of Black is that it eventually ends, concluding its pitiful story with a gag about a man vomiting on an airplane. Oh how envious I was of that projectile vomiting individual, for it was apparent he was enjoying himself far more than I. And then, once the lights in the auditorium go on, you can once again enter the real world, where actual art and mirth can be found. The sun shall shine on your body, as you close your eyes and whisper the phrase "It's over" multiple times to yourself. And then you can go home and listen to the music from the Hamilton soundtrack (my personal favorite song from the show is Satisfied), which is full of artistic merit, fun, talent and craft. Gee, it's like the antithesis of Fifty Shades Of Black!
Posted by Douglas Laman (NerdInTheBasement) at 4:17 PM