The Problem With Lights Camera Jackson Isn't His Age, But Rather, Everything Else 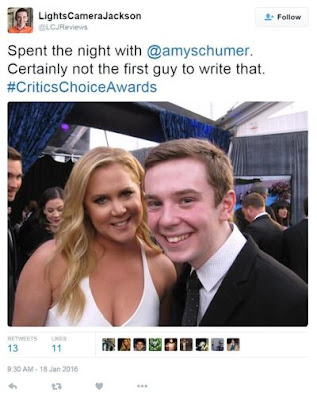 My first published film review was in February 2012 on my High Schools online newspaper, back when I was just two months over the age of 16. I can never go back and look back through my writing from those days, though to be fair, I have the same problem with reviews written as recently as a day ago. The faults of my prose always stand out so much, and my insecurities over my writing will drive me absolutely up the wall. Anywho, I got started at this profession at a young age, and I was even younger when I first got hooked on the world of cinema.

Not all of us find our path to film this early in life (there are plenty of "late bloomers" in the world of film criticism who are masters at talking about the artform), but I'd say many individuals who are obssessed with cinema do find that they have this concrete affection for this medium of storytelling in the early years of being a teen. Point being, Jackson Murphy, a 17 year old film critic who goes by the name of Lights Camera Jackson, should not be derided for his age when it comes to his criticism of the cinematic arts. On the contrary, his age might provide a unique perspective on certain films, and over a larger career, one can even see how his writing grows or how his affinities for certain sectors of cinema might change.

Unfortunately, the promise of that concept isn't quite fulfilled by his writing. One need only look at his reductive reviews (his review for Inherent Vice dubs the Paul Thomas Anderson film to be "Incoherent Vice", a play on words that even I, the King Of Bad Puns, feel is too sloppy and obvious) and his recent activities on Twitter get your blood boiling on the dude. Now, full disclosure, my writing is not perfect, far from it.  I'm sure he'll improve as time goes on, and his reviews from 2015 already have far more nuance than when he was 11 years old and on The Today Show proclaiming Inception to be "too confusing" (yes, that really happened). However, the writing of Jackson Murphy is still egregiously underwhelming, putting easy puns (he closes out his review of The Big Short by noting how he's "...not bullish on its prospects to be embraced by moviegoers and if I had stock in the film, I'd be selling") over insightful critical analysis. But, to be fair here, such pieces of writing on their own would likely just get a handwave from me. After all, I was no Dilys Powell when I was 17, and the kids just writing and enjoying cinema. What's the harm in that?
My ire for this individual stems not just from foibles in his writing style, but primarily from those aforementioned recent activities on Twitter. This morning, Mr. Murphy put up a photo of himself with Amy Schumer at the Critic's Choice Awards on Twitter. His caption for the photo? "Spent the night with Amy Schumer. Certainly not the first guy to write that." Allow me to forego mincing words here...the hell would possess this kid (and judging by his maturity here, I'd say he is very much a kid) to put up a caption like that?!?! In what state of mind would he have to be in to think that was a good idea??? He followed up that tweet with a post attempting to put the blame on those who had (more than justified) grievances with the Amy Schumer post, stating that "You people have dirty minds". This was followed by Amy Schumer being a total bad-ass, calling this moron out on his shit on Twitter and Murphy declaring an apology to Schumer that might as well have been sponsored by the phrase "half-ass".

Perhaps I should go for a more refined statement to describe Jackson Murphy's actions in this predicament, but I think this simple phrase will sum it up nicely: what an enormous asshole.

Yes, I am aware that 17 year olds do stupid things all the time, I can say that with complete confidence due to experience. But age isn't a 100% excuse for stupidity, just look at the misogynistic ramblings of film critic Jeff Wells. This rings especially true due to the fact that this isn't the first snafu Jackson has had regarding saying terrible things on Twitter to celebrities. He also previously took a photo with Chiwetel Ejiofer, and then on the actors birthday posted the image with the caption "Don't be slave to your diet, have some cake!". His reaction to this Ejiofer caption was the same as his Schumer comments; at first trying to dodge having to apologize, and then tweeting out a half-hearted apologetic remark. Rinse, wash, repeat.

This may be what irritates me most about Jackson Murphy. Not his weak-ass reviews, not his young age, but his inability to learn from his mistakes. We all stumble in life, but the whole point of experiencing those blunders is to grow as a person. It's pretty apparent that Jackson Murphy is not doing any of those things regarding his social media activities. Film critics, no matter the age, should try to offer something of substance to the world of cinematic analysis, bringing new ideas to the table stemming from unique perspectives and ideologies. The only thing Murphy has brought out thus far in his contributions as a film critic is an overdose of misplaced bad puns and slut-shaming.
Posted by Douglas Laman (NerdInTheBasement) at 5:15 PM