Terminator: Genisys Will Not Be...Followed Up By A Sequel (Plus: New Release Dates For Baywatch And Star Wars Episode 8) 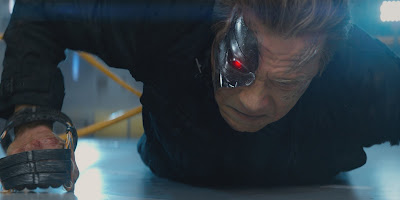 Yesterday, Disney threw the summer 2017 schedule into a state of turmoil, as they shifted Star Wars: Episode VIII from May 26, 2017 to December 15, 2017. Considering how well The Force Awakens has done over the holiday season, it's no shocker that they've moved the film up to this release date. I do wonder if the two titles Disney has planned for November will be shifting; Thor: Ragnarok might be OK on November 3 (Spectre managed to do a surprisingly high 2.85 times its opening weekend in an early November timeframe, putting it seven weeks ahead of The Force Awakens, the same amount of time between Thor 3 and Star Wars 8) but considering how poorly The Good Dinosaur held up against The Force Awakens, I'd imagine PIXAR's Thanksgiving 2017 film Coco might be searching for a more hospitable timeframe to open.

Not wanting to leave that Memorial Day timeframe unoccupied, Disney shifted Pirates Of The Caribbean: Dead Men Tell No Tales from July 7, 2017 to May 26, 2017, putting it in the late May timeframe that the last two Jack Sparrow adventures have opened in. In response, Sony's new Spider-Man movie (which is being handled by Disney subsidiary Marvel Studios) moved into the now vacant early July spot previously occupied by Jack Sparrow. I actually think this is a major mistake, since Spider-Man's original release date put it in that late summer timeframe that proved to be most lucrative at the box office for Guardians Of The Galaxy. Now, Peter Parker is gonna have to face off against new Planet Of The Apes, Luc Besson and Christopher Nolan movies in the weeks afterwards.

And finally, Paramount took yesterday as the chance to answer the question I've been pondering for six months now; will they really follow through on the planned release dates for two sequels to last summers Terminator: Genisys? The answer turned out to be a definitive no, as the studio removed the first Terminator: Genisys sequel from its release schedule. Originally planned for a May 19, 2017 release, Paramount has now slated Baywatch (which is becoming an R-rated comedic feature film starring Dwayne Johnson and Zac Efron) in its place. This isn't the most unexpected development in the world, despite production company Skydance attempting to put a happy face on their critical and financial misfire.

Terminator: Genisys fared decently in some overseas markets, particularly in China where it took in $113 million. But the film just did not get anything remotely resembling solid word-of-mouth, and it even managed to underperform in several key foreign territories (it only took in $16 million in the United Kingdom, which puts it below far less expensive titles like Taken 3, Daddy's Home and The Lady In The Van). Needless to say, this wasn't enough to generate the massive franchise the studio had hoped for. Interestingly, the second Terminator: Genisys sequel is still slated for a June 29, 2018 release, but I have a hunch that'll also be removed in due time.
Posted by Douglas Laman (NerdInTheBasement) at 11:28 AM