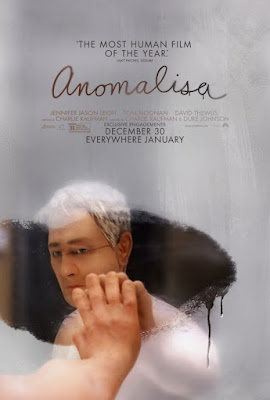 So, uh, what the hell is Paramount Pictures doing handling the distribution of Anomalisa? The same studio responsible for ushering in the Transformers sequels, as well as the 2014 Teenage Mutant Ninja Turtles film and Terminator: Genisys, are now in charge of a stop-motion animated Charlie Kaufman film dealing with pervasive loneliness and its effects on the human psyche. Versatility is the name of the game, and to be fair, Paramount also financed Nebraska and let Darren Aronofsky go hog wild on the tale of Noah's Ark.

Point being, this is definitely not the studio I would have imagined handling this project, but hey, it's neat to see one of the biggest movie studios on the planet take such an interest in adult skewing American feature length animation. Such projects, if they get made at all, tend to stay under the radar, though that may change if Seth Rogens upcoming animated R-rated comedy Sausage Party turns into a big hit and proves that animated films for adults can be a viable financial prospect. But even taken aside from its place in the grand scheme of American animation, Anomalisa leaves one with plenty to mull over, as one could expect from a a motion picture delivered by director Charlie Kaufman, who helms this project with award-nominated filmmaker Duke Johnson.

Part of what makes Anomalisa such a smartly crafted feature from a story perspective is the scale of its story, which takes place over the course of basically a 24 hour period. However, within that minuscule window of time, so much is conveyed about the worldview of our lead character, Michael Stone, a speaker whose briefly staying in a hotel in Cincinnati, Ohio to deliver a speech as a way of promoting his newest book. From the moment he arrives in the city, a subtle visual and auditory motif is established wherein everyone Michael encounters has the exact same face and voice (the latter element provided by Tom Noonan). Everyone around him has shifted into being the same individual, the idiosyncratic traits of the folks he encounters mean nothing to him. Such is the place where his mind currently is stuck.

It's a fascinating idea to weave into the plot, essentially plopping the viewer into the psyche of our lead while also proving this to be that kind of story that really could only be told in the storytelling medium of animation. Now, during Michael's stay at this establishment, he does manage to encounter someone whose voice manages to be distinct, a woman named Lisa (Jennifer Jason Leigh). Michael clings to her for dear life during the evening, hoping she can be a foolproof remedy for what his life has become. Smartly, Anomalisa realizes one person is not going to just shift everything around in the world of Michael Stone, and goes for a more bleak (but thankfully small-scale, this isn't the kind of film that ends with a tragedy that leaves a primary character buried in the ground) conclusion to his interactions with this woman.

Their time spent together is quite riveting, thanks to the dialogue written by Kaufman and the sublime vocal performances from Thewlis and Leigh. Conversing with Lisa allows Thewlis a chance to slide a dash of hope into the pain filled voice of Michael Stone, while Leigh is excellent at creating a rich personality, full of life, full of wonder in Lisa. She an individual with her own thoughts and feelings, not simply an escape route for Michael to use to regain some normalcy, a concept the film makes very very plain both by giving Lisa an extraordinarily layered personality and by going for the aforementioned stark finale.

Perhaps Anomalisa won't be for everyone, it's slower dialogue driven nature driving certain individuals up the wall and instilling them with boredom rather than being glued to the screen. Totally fine if this one isn't up your alley (I'm the guy who didn't care for The Tree Of Life, I get what it's like to not like something critically raved about),  but for me, Anamolisa worked like gangbusters as a somber insightful examination of one man and the way he views the world. Few movies are quite like this one in terms of plot elements, visual motifs and having such a fascinatingly introspective nature.
Posted by Douglas Laman (NerdInTheBasement) at 6:56 PM