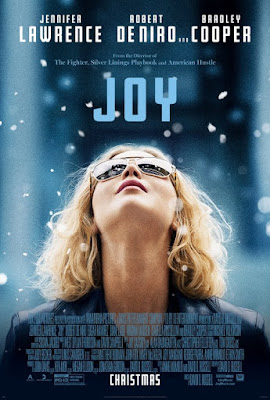 Now that Jennifer Lawrence is free of her Hunger Games and  X-Men commitments, I'm super curious to see what projects she undertakes next. She apparently wants to try her hand at directing (following in the footsteps of other A-list actors who go behind the camera like George Clooney, Angelina Jolie Pitt and Clint Eastwood), but I do hope her future efforts have more substance to them than her latest starring vehicle, Joy, a noble but ultimately underwhelming film devoid of energy and personality.

The name of this feature derives from our lead character, Joy (Jennifer Lawrence), whose being overworked by her family and decides to blaze her own path in the world of business by creating a new kind of self-wringing mop. She soon finds herself constantly in over her head, but Joy is not one to back down from a confrontation. Anything life tosses out at her she'll gladly grab and toss back. It's no exaggeration to say that Joy is a determined as hell individual, and Lawrence aces making that aspect of the characters personality shine through even in moments where she may just be sitting in the background.

You can feel Joys unique presence driven by resolve constantly throughout the movie, and early scenes of the story do a nice job of establishing why she would be unswerving in her desire to break free from her put-upon existence. Unfortunately, Joy is one of only two people in this entire film that has any semblance of nuance, and even she begins to lose some of her distinctiveness by the time the climax of the plot arrives. All of the figures in Joy's life are so fundamentally one-note, particularly her sister, Peggy (Elizabeth Rohm), they're more like obstacles than actual human beings.

Considering the suffocatingly super serious tone of the entire picture, these kind of overt personalities stick out like a sore thumb in the confines of this narrative. Let me put it this way; there's a scene towards the end of Joy where our protagonist confronts an antagonistic Texas businessman. What motif is used to signify he's from this particular part of the USA? Why, he dons a gigantic cowboy hat. Now, I've lived in Texas my whole life, and I've seen my fair share of people wearing such a piece of attire, but it still felt like an inappropriately blatant visual cue given the somber tone of the rest of the motion picture.

It strikes me odd that Joy is so lacking in humor or vibrant energy considering the director/writer of this project, David O. Russell, is well-known for his witticism filled dialogue that not only helps create laughs but can also lend insight into a characters personality. There's only one attempt at levity in Joy that I can recollect, and while a lack of humor isn't inherently bad, the tedious manner of Joy made me long for something like comedy to enter the feature and liven up the proceedings. Much of the monotony of certain sequences struck me as odd since they lack the filmmaking pizzazz Russell brought to his last three movies (which are the only other movies from the director I've seen, for full disclosure). There's this part in Joy where Bradley Coopers character shows Joy the inner workings of an infomercial set that has all the lively energy of Eeyore reading a Wikipedia article, verbatim, on some obscure species of banana slugs. Snazzy editing or interesting conversations of any kind won't be find in this section of Joy, and alas, it's not the only part of the feature that feels this banal.

I'm not asking for this small scale drama to be paced like a Michael Bay film, but I do wish the characters and dialogue were far stronger than they are, since both elements are simultaneously crucial to the film on a conceptual level and mostly fall flat in their execution. To be seriously fair here, this movie is far from bad, especially since Joy contains some solid performances from Jennifer Lawrence, Robert De Niro and Edgar Ramirez. But that mixture of an overly serious tone and lack of substance in the movies themes and characters becomes a deadly combo that hinders Joy from providing a cinematic experience that generates its titular emotion.
Posted by Douglas Laman (NerdInTheBasement) at 6:51 PM