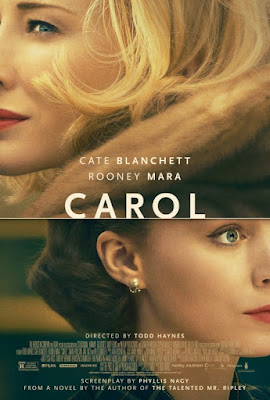 The new and unexpected tends to always be frightening. Anything that upsets the established conventionality of our lives can be seen as a threat or it can be seen as a chance to grow as a person, to explore new realms of our very lives. Unfortunately, many take the route of looking at the unknown as inherently troublesome, and that certainly applies to members of the LGBTQA community, whose lifestyle is one that many have and continue to fight for. Both in the past and still in our modern society, the idea of two guys or gals living together is treated as an affront to "family values" and "traditionalism", a way to simply upend the standard way society looks at the idea of what constitutes two people in love. Members of the LGBTQA community have had to suffer under the burden of these suffocating customs for decades as they try to make their lives their own.

Carol centers its tale on two women in 1952 who're ready to embrace who they truly are, but are also acutely aware of the social consequences that stem from them having a relationship. These women in question are Carol Aird (Cate Blanchett) and Therese Belivet (Rooney Mara), two souls who are both feel constrained by their very different lives. Belivet finds solace in pictures while numerous men around her jockey for her hand in marriage, while Aird is stuck in a crumbling marriage with a man named Harge (Kyle Chandler) whose attempting to keep their marriage going for the sake of appearances.

From the moment Carol and Therese meet (Carol is looking to buy a Christmas gift for her daughter and asks Therese, whose working as a clerk for assistance), there's a winning chemistry between Mara and Blanchett, and the personalities they emanate for their individual characters make it obvious hwy they'd be attracted to each other. Carol practically personifies the words suave and urbane while also carrying a super approachable demeanor, a sharp contrast to the numerous men around Therese who are always putting upon daunting propositions (like moving to France) on her shoulders.

Meanwhile, the far more inward Therese is a gentle individual prone to kindness, such as returning Carols gloves that she left at the store. Carol then asks to bring Therese out for a meal as a sign of gratitude, and of course, a more romantically fueled bond between the two characters snowballs from here. It's interesting to see the dialogue in these early sequences between Carol and Therese, as the idea of discussing lesbianism so frankly in a public setting was unheard of in this era (the world lesbian is never uttered in the running time of this picture) That is to the advantage of the script by Phyllis Nagy, which finds more subtle ways for the two to bond in these early scenes of Carol depicting the nascent days of their relationship, finding ways to establish the connections between the duo through subtle movements and pieces of dialogue.

Cate Blanchett, a total pro when it comes to bringing plenty of nuance to the equation in her performances, and Rooney Mara excel at executing the more subdued aspects of these sequences that are a key component for why the relationship between these two works so well. Even the tiniest gesture or eye movement from the two can speak wonders as to their underlying emotions. Another reason why their dynamic takes off so brilliantly is because how well both characters have been effectively set up in earlier portions of the story to make them pursuing this relationship feel like an understandable move. In a lesser film, Carol, who has a husband and a daughter, pursuing Therese could have come across as irresponsible and even demeaning to Therese as a character since one could see Carol using this woman as an escape route from her life and nothing more.

Instead, there's a sense of joy in seeing Carol having lunch with Therese, in seeing them cozy up together in a hotel room on New Year's Eve. For so long (for Carol specifically, it's been five years since she tried to have a relationship with another woman), both have been at the beck and call of conventional sexuality, unable to find the joy that had been missing from their lives. Honest to God, I could just watch scenes of these two at lunches or having small talk all day, so well realized are their characters from a scripting and acting standpoint. Of course, nothing lasts forever and soon conflict (stemming from Harge) enters the picture, and after so many intimate scenes of acceptance and euphoria that drew me in to caring about these characters like a fish being drawn to bait,  I found myself being enthralled in how Carol and Therese come to terms with the incongruity staring them in the face.

This emotionally harrowing tale is directed by Todd Haynes, a filmmaker whose work had evaded me until now. Like one of my favorite directors, Richard Linklater, Haynes has a gift for staging sequences of extended dialogue, and his already terrific directorial work is boosted immensely by a production design that takes advantage of all of the best aesthetic qualities of this mid-20th century era. Hell, every outfit Carol wears in the movie alone are outstandingly radiant, and the luscious color pallet seen on her attire and in the various sets of the film create an absolutely gorgeous aesthetic that's a a feast for the eyes.

Carol is a movie that can create great joy between its characters, a sense of harmony in finding serenity with another human being. Perhaps that could have come off as mere treacle without the aid of conflict or darker elements, but rest assured, they exist. Carol is not interested in romanticizing this decade, it's showing the struggles individuals like Carol and there endured then (as well as in today's society) just trying to live and enjoy their own lives.  Above all else though, this is a story of love. It's not something that works out perfectly every step of the way. In fact, more often than not, it's fraught with peril, trails and tribulations. But there is beauty found in this specific emotion too, just as there is beauty to be found in every frame of Carol.
Posted by Douglas Laman (NerdInTheBasement) at 7:03 PM