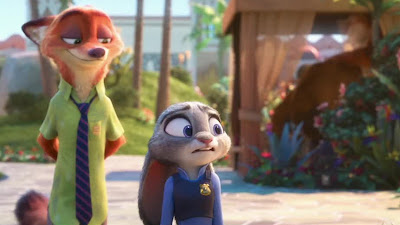 There are six new movie trailers floating around on the interwebs.

Wanna watch em and then read my thoughts/rambling anecdotes about them?

Well! You're in luck! I'm about to do just that!

First up...
Zootopia
While previous trailers had been entirely gag-oriented (a smart move considering how much of a hugely positive reception that sloth DMV trailer got at my Star Wars: The Force Awakens screening), this new Zootopia trailer gives viewers a glance at the overall plot of the feature. Apparently, that story will also carry allegories related to racial tensions (there's even a line about our protagonist, rabbit Judy Hopps, not being "...a token bunny"), which could be quite interesting to see if it executed correctly. One can also see from this trailer the large number of visual gags the movie will likely mine from the unique traits of the various animals in Zootopia, as well as some of the more emotional moments of the production. Consider me mightily interested.

Also, little tip for future animated family movies. Ya see that Mr. Big gag in this trailer? That's how you do a pop culture reference. Don't just do what Doogal or Shark Tale do where the entire gag revolves around "American Idol" or some other soon to be dated facet of pop culture. In this Zootopia trailer, Mr. Big is obviously a homage to The Godfather, but humor is also drawn from the fact that this tiny creature is a menacing mob boss. So, in other words, if you get what its referencing, awesome, you'll get a giggle out of that. If you're unfamiliar with the reference, never fear, there's still a joke there you can laugh at.

https://www.youtube.com/watch?v=XsTWArbgeD8
Jane Got A Gun
This long delayed western starring Natalie Portman is finally getting a domestic release, one of many setbacks experienced by this production. The first trailer for Jane Got A Gun makes the film look on the generic side, but hopefully that's just the Weinstein Company marketing trying to make the film broadly appealing and not a major foible with the actual motion picture. Above all else, that's a great cast they've got on hand, and I'm especially excited to see what Joel Edgerton does here after his noteworthy work in The Gift.

https://www.youtube.com/watch?v=oeDJj8f4cnY
The Conjuring 2
I was one of the few people who wasn't totally enthralled with The Conjuring. Oh, I liked it well enough, but it didn't bowl me over like it did to many others. Its massive success at the box office has drawn up another follow up (following that Annabelle spin-off), simply titled The Conjuring 2. Perhaps the scariest part about this trailer is the sound work, which does a great job evoking fear from  the noises of everyday household items. That very last bit with the crosses went on a bit too long in my book, but yeah, I'm sure this trailer will have moviegoers lining up around the block for more Conjuring scares.

https://www.youtube.com/watch?v=yJaVR3ZXJjs
London Has Fallen
Full disclosure, I despised the dreary slog that was Olympus Has Fallen, so the concept of a sequel has not been the most enticing proposition for me. But hey, if this trailer is anything to go by, at least this one looks like, in contrast to its predecessor, it was made for more than five dollars. Probably my biggest takeaway from this trailer is that these have gotta be the easiest paychecks Morgan Freeman will ever get. All he has to do is sit in a room for a few hours and spout of dramatic lines they can put in the trailer! Oh yeah, and I guess Gerard Butler has to do stuff, which I assume includes preventing that White House Down/Magic Mike crossover follow-up I want desperately from existing.
Elvis & Nixon
Amazons second foray into original feature films (following this past Decembers Chi-Raq) will apparently arrive in April judging by the trailer the studio sent out yesterday in honor of celebrating the birthday of Elvis Presley, who is played by Michael Shannon. As the title subtly implies, this movie focuses on the meeting between him and Richard Nixon (Kevin Spacey), though hopefully there's more the plot of the movie than just the interactions between this duo since the one-joke premise is already overstaying its welcome a bit by the time this trailer concludes.
Pass Thru
Do you know who Neil Breen is? No? He's an architect/filmmaker whose forays into directing have resulted in some of the most bizarre features of the 21st century. And now, Breen is returning to the world of cinema next year in the film Pass Thru, which is described on the movies website as "A VISIONARY, REVOLUTIONARY FILM..." (yes, it's typed out on his website in all caps and in bold). Good luck gleaming a concrete plot synopsis from this trailer for the upcoming motion picture, as it just spirals into utter madness before it even crosses the 30 second mark.  To put it bluntly, a bit where Breen declares "THE CLEANSE HAS BEGUN: followed by a shot of three clocks just chilling in a canyon had me in a fit of hearty laughter.

Now, while I'll chuckle at the trailer for this oddball feature, I do wanna give serious props to Breen, a dude who has an obvious devotion to cinema deep enough to want to make his own films his way. Pass-Thru looks like a strange as hell beast with some clunky filmmaking, but I can honestly say I'm far more excited to see it than, say, London Has Fallen. There is no current definitive release plan for Pass Thru (the website simply says it's coming, in widescreen no less, in 2016, and the page also notes that inquiries regarding distributing the film are welcome), but I'd be lying through my teeth if I were saying I wasn't extremely curious as to what the hell Pass Thru ends up being as an entire feature film. Hell, I just wanna find out what in Gods name is going on with that tiger.
Posted by Douglas Laman (NerdInTheBasement) at 10:50 AM