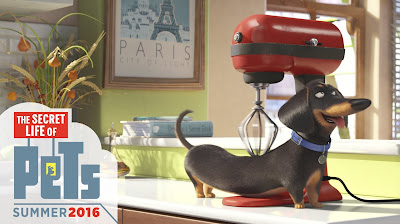 With a high profile family film like Kung Fu Panda 3 coming out this Friday, it's to be expected that a number of family films have released trailers in order to get them seen in front of prospective audiences coming out to see Po the Panda. We got four trailers to look at today, so let's get started with my favorite of the bunch...

Kubo And The Two Strings
https://www.youtube.com/watch?v=p4-6qJzeb3A
Holy hell, how is this being done with stop-motion animation? Every frame of this trailer is absolutely beautiful to look at, but thankfully, there's not just style that one can gawk at in this trailer. I love how this trailer doesn't try to fill every second with hyperactive noise and/or jokes, but rather, establishes the plot, atmosphere and characters in a pleasant manner. All of that, plus, a roster of excellent voice actors (Charlize Theron! Ralph Fiennes! Rooney Mara! Matthew McConaughey!), and that excellent Beatles cover, and yeah, it's super easy for me to dub this as one helluva trailer. Consider Kubo And The Two Strings officially one of my most anticipated movies for the year.

Did ya like the atmospheric beauty of that Kubo trailer? Well, the rest of these trailers substitute that for bathroom humor and dancing to pop songs so....yay?

The Secret Life Of Pets
https://www.youtube.com/watch?v=UZJVc_JTI_w
Marking the fourth trailer for The Secret Life Of Pets in the span of seven months (and we've still got five months to go until this movies actually released!), this one brings more of a concrete plot to the proceedings, depicting Max (Louie C.K.), a dog, feeling his life upended when his owner gets a new mutt, Duke (Eric Stonestreet). Basically, it's the same character dynamic Toy Story and Over The Hedge have already done, and this trailer really brings nothing new to the table in terms of plot points or gags. It also looks like they're getting as much mileage as possible out of that heavy metal poodle joke, huh?

The Angry Birds Movie
I was relatively kind to The Angry Birds Movie when its first teaser arrived back in late September, but that goodwill towards its marketing has vanished with this new trailer. All I can really say about this one is that if you've ever had the compulsion to see a movie where Danny McBride spits urine into the eager mouth of Josh Gad, it looks like we've got a movie for you!

Small, easily marketable and toyetic characters dancing to a modern dad pop song (in this case Watch Me Whip/Watch Me Nae Nae)?

Hey, remember how good the How To Train Your Dragon movies were? Yeah, those were awesome.

Nine Lives
https://www.youtube.com/watch?v=dPxI4yOKdgc
Early candidate for most bizarre project of 2016? I'll say yeah. Was this made by someone nostalgic for the days of late 90's live-action Disney family films (the kind made on the cheap and quick like You Favorite Martian and the That Darn Cat! remake), cause that's the kind of cinema this trailer evoked to me. I kind of wish with a premise ripped straight out of a Tropic Thunder trailer parody they went with a more oddball premise than more of this "dad needs to learn to spend more time with his kid" tripe. I'm also pretty certain nothing Christopher Walken does here will top this beautiful insanity from Gigli: