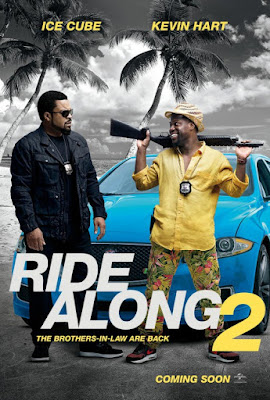 When the first Ride Along came out, Kevin Hart had spent numerous years on the stand-up circuit, becoming a major enough presence there to warrant a leading role in a major American motion picture (he had previously had supporting roles in films like Think Like A Man, Death At A Funeral and a tiny cameo in This Is The End). The enormous box office of Ride Along ensured that this wouldn't be the last time he was the cinematic leading man, and numerous other projects like The Wedding Ringer and (ugh) Get Hard followed.

And of course, one of those films to stem from the success of Ride Along is a follow-up imaginatively titled Ride Along 2. Basically, this sequel rehashes the plot and character dynamics of the first movie; Ben (Kevin Hart) and James (Ice Cube) are cops who are polar opposites in terms of demeanor. Ben is a talkative, hyperactive individual while James is a super stern guy so cool under pressure he makes cucumbers look cold. This duo is sent off to a case in Miami, where things soon spiral out of control as they get on the bad side of a villainous rich fellow named Antonio Pope (Benjamin Bratt).

In this entry in the grand Ride Along saga, Ben and James aren't alone, joined by Miami residents Maya Cruz (Olivia Munn) and hacker A.J. (Ken Jeong). Jeong is responsible for the majority of the few laughs in the film, while I wish Munn got more to do than just be the straight man to the antics of characters played by Hart and Jeong. Her few funny moments (like a little high-five she gives to Pope whilst exiting at a party) are funny enough to make me wish the film had cut out some of the incessant ad-libbing Hart does and given her more time to let loose comically.

Speaking of which, yeah, Hart gets numerous opportunities to improv in this movie, and it feels like, elements of the story are being worked around opportunities to just let the comedian riff for a while instead of just trying to establish a cohesive story structure. Director Tim Story seems to be almost as in love with just letting Hart cut loose in improvisations as he is with stuffing the movie with numerous establishing shots of Miami. It doesn't help that the comedic stylings of his character grow extremely one-note very early on in the movie, with there being very little variety in terms of how Hart's extended monologues are composed. Soon enough, the character I most identified with was James, whose weary expression at having to put up with Ben was one I could totally relate to.

While Kevin Hart's shtick grows tired, I will say Ride Along 2 never sinks to the level of being "painful" to endure. Surprisingly, one place the film actually does alright in is the action, which is shot decently, and seems to have had some actual thought put into it. Considering how frequently our two lead characters engage in chases on foot and in automobiles, it's a good thing this facet of the production is at least executed with some semblance of cohesiveness, though attempts to weave in comedy into the action (namely in a car chase that is depicted in a visual manner reminiscent of a Grand Theft Auto style game that Ben plays) are much less successful. Never has the throwaway phrase "you could do worse" been more applicable as a concise summary than in the case of Ride along 2.
Posted by Douglas Laman (NerdInTheBasement) at 1:51 PM