Star Wars: The Force Awakens Is A Multi-layered Millennial Manifesto 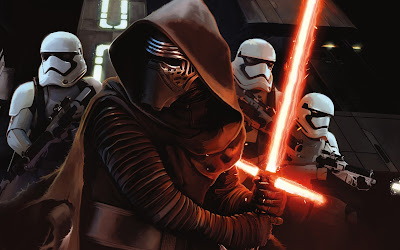 SPOILERS AHEAD FOR STAR WARS: THE FORCE AWAKENS

Star Wars: The Force Awakens is a way for the media conglomerate that is Disney to create new methods of sucking your wallet dry. Every piece of merchandise is perfectly calculated to be just reasonably priced and enticing design wise (I know those characters on that shirt!) to be irresistible to the average consumer, especially given the fact that all of this apparel is debuting alongside the motion pictures release around the financially lucrative holiday season. Star Wars: The Force Awakens, essentially, is the cinematic incarnation of a Disney shareholders most blissful dream.

But here's the most intriguing part about this entire enterprise; somehow, along the way to creating one of the biggest financial slam-dunks in recent memories, a funny thing happened. The individuals behind this film gave a shit. They knew they were dealing with something sacred, a franchise that had an enormous emotional resonance with viewers across the planet. This was a saga that had endured in the 21st century as mostly a laughingstock, as the various moments of the prequels and the edited special editions of the original trilogy became the primary way Star Wars stuck around in the modern day pop culture zeitgeist.

Kathleen Kennedy, J.J. Abrams, Lawrence Kasdan, they all seemed to grasp the incredible burden on their shoulders, and instead of just cashing in a paycheck and mining the imagery of old Luke and Han Solo for nostalgia dollars, did something else entirely; they made a great movie. Separated from its hype machine, taken aside from the massive build-up, The Force Awakens works like gangbusters as its own individual piece of cinema.

Perhaps the most stirring part about The Force Awakens, in the context of underlying thematic  content, is how it deals with the unique characteristics of the Millennials generation (which, for the record, is a generation I belong to). Surprisingly, this feature may likely be the most high-profile piece of media dealing with this section of the human population in a more nuanced manner than "WHY ARE KIDS THESE DAYS ALWAYS ON THEIR PHONES GODDAMNIT?!?!" Now, let's not beat around the bush here, Millennials may as well be dubbed Generation Nostalgia given how much of our pop culture and even general everyday existence is marked by the inescapable presence of the yearning for artifacts, clothing, films, shows, etc. of the past. Hell, Buzzfeed has turned this penchant for nostalgia into a web empire. It's not as if this trait is inherently unique to Millennials (one of the best plot points of the 2011 film Midnight in Paris showed that the romanticizing of the past has been around for ages), but it's certainly a defining aspect of this specific generation.

I have a hunch it's no coincidence that The Force Awakens centers the majority of its plot on three characters (Rey, Finn and Kylo Ren) who are in the specific age range to be classified as millennials, especially given how prominently the presence of nostalgia factors into the overall plot. Notice how the earlier saga consisting of Episodes IV-VI has faded into legend in this universe, with characters like Rey (Daisy Ridley), talking about those events in whispers of reverence. Hell, right after meeting Han Solo (Harrison Ford), she and Finn (John Boyega) both bat around the various titles he's held over the course of the three movies (though Rey, despite her admiration for the man, is a bit off in the exact amount of parsecs Han Solo did the Kessel Run in).

On the flipside, the compulsion to cling to the past also becomes a hindrance for Rey, a character who was abandoned on the planet Jakkuu. So all-consuming is this desire to be reunited with her parents that Rey is constantly reminding those around her that she must return to the planet as quickly as possible in order to be there for her parents inevitable return. Similarly guzzled up by the allure of the pas is, the primary foe of the motion picture, Kylo Ren (a character who, like Rey, fits right into that age range of being a millennial), who goes much farther in his devotion to the figures of the past. He finds his inspiration in the burnt mask of Darth Vader, and even dons his own headpiece in order to bring himself visually closer to his idol.

The concept of nostalgia is not depicted as a be-all indicator that this new crop of youngsters is doomed, rather, like anything else, a fixation on the past can be a good or a bad thing, it just depends on what you're using that nostalgia for. Using tales of past adventures of Luke Skywalker and his friends to inspire individuals like Rey is great, while becoming overly obsessed with a deceased figure like Darth Vader leads Kylo Ren down a path of prodigious darkness. And having Rey utilize an artifact of the past (the lightsaber of Luke Skywalker) to save the day in the end only helps emphasize this piece of subtext further. The Force Awakens is showing Millennials across the globe that there's nothing wrong with being focused on the past, so long as it doesn't interfere with the possibilities of an uncertain future.

Perhaps that uncertain future is why my generation clings so much to the past. We all know how the songs of the Beatles's will go, every beat of movies like Jurassic Park, there's comfort to be found in that sort of security. Given the chaotic state of the world these days (which, to be clear, didn't just come out of nowhere, the world as a whole has always been in a state of disarray), it's not shocking to see Millennials hold on for dear life onto older pieces of pop culture that carry a reassuring sense of solace. Perhaps that's why The Force Awakens is resonating so much with moviegoers in my age bracket; it's not only telling us that a balanced approach to nostalgia can be a good thing, but that we, like similarly aged characters such as Rey, are capable of turning our nostalgia into something new and impactful on the world around us. Other movies shake their head at the SnapChatting millennials as a vanity obsessed lost cause. The Force Awakens, meanwhile see's the potential in the nostalgia fixated youth of today.

What is Star Wars: The Force Awakens? It's a way to sell more toys and break every box office record you can think of. It's also a way for J.J. Abrams and his crew to tell an excellent story in the realm of one of the most well-known franchises of all-time. It's a motion picture whose storyline and characters hold personal resonance for an entire generation of human beings while working as a successful piece of storytelling separated from that interpretation. And, above all else, Star Wars: The Force Awakens works like absolute cinematic gangbusters that shows that, for this current generation that thrives on technology and nostalgia, they may just be (super obvious pun incoming!) a new hope for the world after all.
Posted by Douglas Laman (NerdInTheBasement) at 8:55 AM