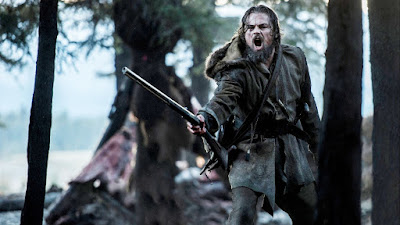 A big o'l snowstorm left much of the country in a winter wonderland (meanwhile, down here in Texas, we're getting a high of sixty degrees today), closing many businesses, including movie theaters. It's hard to say how much this impacted the box office, though many holdovers like Ride Along 2 and The Revenant had sharper than expected declines that could be attributed to the inclement weather.

Anywho, the number one film in America was The Revenant, reclaiming the top spot in its third week of wide release with a $16 million gross, a 50% drop from last weekend. This one's now taken in $119.1 million and is currently the eighth biggest movie ever for Leonardo DiCaprio, inching past the $116.9 million lifetime gross of The Wolf Of Wall Street. It should have no trouble surpassing Shutter Island ($128 million) and The Departed ($132.3 million) by next weekend.

In second place was Star Wars: The Force Awakens, still chugging along with another $14.2 million gross this weekend, taking its lifetime gross $879.2 million. That's the eighth best sixth weekend of all-time, just behind Toy Story ($15.5 million) and Aladdin ($15.6 million). Look for this new sci-fi box office phenomenon to close its box office run somewhere between $910-920 million.

Down in third place was last weeks box office champ Ride Along 2, which plummeted a steep 63% for a haul of $12.9 million this weekend. That's a much harsher drop than past Kevin Hart vehicles like Get Hard (61%), The Wedding Ringer (45%) and the first Ride Along (49%). Ride Along 2 has now taken in $59 million and will have difficulty crossing $100 million, likely closing its domestic run in the vicinity of $85 million.

In fourth place was the highest grossing of this weekends new releases, Dirty Grandpa, this Zac Efron and Robert DeNiro film grossing only $11.5 million over the weekend. For Efron, this is a step up above duds like We Are Are Your Friends and the Awkward Moment, but is far from his best box office performance, even winding up 6% below the $12.38 million opening weekend of his 2010 effort Charlie St. Cloud. For DeNiro, it's one of his lower opening weekends in recent years, ending up below the debuts of recent comedic efforts like The Intern ($17.7 million), Last Vegas ($16.3 million) and The Family ($14 million). This feature ended up making even less on its opening weekend than Machete ($11.4 million), which DeNiro had a supporting role in.

Dirty Grandpa had so many factors working against it it's almost a miracle it made it over $10 million in its opening weekend; its distributor, Lionsgate, has very little experience marketing high profile comedies, while the hard R rating of Dirty Grandpa might have made it too raunchy for older audiences who typically come out for comedic DeNiro films like The Intern and Last Vegas. Plus, the title was also super similar to another "elderly person run amok" feature, the Jackass spin-off Bad Grandpa, not to mention it was torn to shreds by critics. No word on the budget for this one, but I doubt Efron post-Neighbors came cheap. So yeah, this one isn't a cataclysmic dud at the box office, but it's also a lower the average earner for both of its stars that I doubt will become much more than a critical punching bag from here on out.

In fifth place was another newcomer to the marketplace, The Boy, with an OK, but not great $11.2 million. This horror feature cost about $10 million to make, and in the spectrum of opening weekends for supernatural horror movies was just above Mirrors ($11.1 million) and just below Ghost Ship ($11.5 million) and The Fog ($11.7 million). The Boy was, from a conceptual level, gonna have trouble standing out from a marketing perspective considering the concept of evil dolls in horror movies is well-trodden ground (those Puppet Master movies are still on-going in the land of direct-to-video sequels, and of course, Annabelle made over $80 million in the fall of 2014) and trailers, posters and commercials for The Boy never gave it anything to stand out in terms of a location, notable actors or inventive scares. At least it was cheap to make and did manage to get over $10 million in its opening weekend, outpacing the debuts of recent horror films like The Gallows ($9.8 million) and Sinister 2 ($10.5 million).

The 5th Wave? Please take a seat next to other failed Young-Adult Novel Film Adaptations like The Host and The Giver. Yeah, this Chloe Grace Moretz starring feature bombed over the weekend, grossing only $10.7 million over the weekend. In terms of other YA novel movie adaptations, this one did come in ahead of The Host ($10.6 million) and The Mortal Instruments: The City Of Bones ($9.3 million), but failed to scale even the heights of a box office misfire like The Giver ($12.3 million),  Even on a more modest $38 million budget, I think it's fair to say that the opening of The 5th Wave failed to make.....an impact on the box office. Moretz and Zac Efron (the duo both had box office duds this weekend) are likely eagerly awaiting the arrival of Neighbors 2: Sorority Rising to boost their respective box office profiles.

13 Hours: The Secret Soldiers Of Benghazi had one of the stronger holds in the top ten, down just 40% for a second weekend take of $9.7 million. This latest feature from Michael Bay has now grossed $33.4 million, and it looks like it has a good shot at surpassing the domestic haul of Bays last non-Transformers film, Pain & Gain (which took in $49.8 million). Also sticking around in its second weekend was Norm Of The North, this Rob Schneider vehicle amassing another $4.1 million, a 40% dip from last weekend. Norm has now taken in $14.2 million and is gonna have real trouble sticking around once Kung Fu Panda 3 arrives next weekend.

Going into wide release for the first time this weekend was Best Picture nominee Room, expanding into 862 locations and grossing an additional $1.4 million for a per theater average of $1,653. Room has now grossed $7.9 million in its 15 week run and will likely cross $10 million when all is said and done. A Best Picture nominee that's showing real stamina at the box office is Brooklyn, which added 275 theaters this go-around and grossed another $1.67 million, taking its domestic cume to $27.5 million.

After becoming the biggest movie of all-time in China, Monster Hunt debuted this weekend in North America in 45 theaters. It's $45,000 cume here was only good enough for an anemic per theater average of $467. Looks like the success of this Chinese feature won't be reoccurring in the states (it also hasn't fared well in a number of foreign markets not named China, namely in Australia, where it only took in $329,979), though the $381.8 million cume of the feature in China already made the film more than profitable.

No word yet on the box office gross of Monkey Up!, the first theatrical endeavor from Air Bud Entertainment. Here's the trailer for Monkey Up! for the curious.
The Top 12 this weekend grossed $102.9 million, down 28% from the same weekend last year when American Sniper was once again on top of the box office and the newcomers to the box office were The Boy Next Door, Strange Magic and critically acclaimed masterpiece Mortdecai.
Posted by Douglas Laman (NerdInTheBasement) at 3:42 PM