The Richly Written First Season of Barry Is Incredible 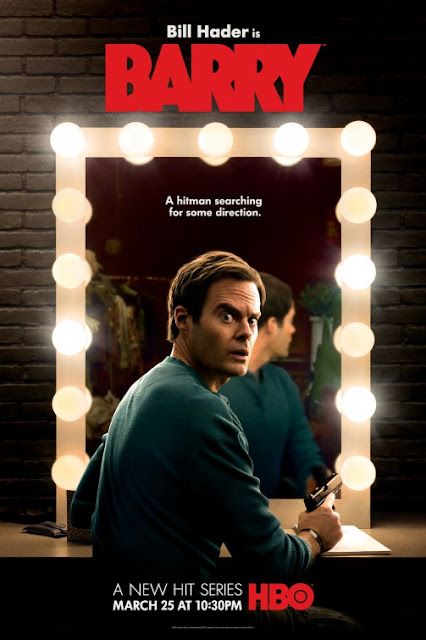 Back in 2014, Bill Hader got to prove his dramatic acting chops in the high-quality film The Skeleton Twins. An excellent dramedy also starring Kristen Wiig, Hader delivered a terrific performance that redefined what I thought he was capable of as an actor. Nearly four years later, Hader's got another sublime dramatic performance to reinforce his versatility as a performer, and even better, it's a completely different character than the one he portrayed in The Skeleton Twins. The character is Barry, the star of the HBO comedy Barry. Who is Barry? Well, he's a hitman, a former Marine and...that's about it. Barry doesn't have anything to his life beyond just being a guy who kills people, his Uncle Fuches (Stephen Root) makes sure of that.


A seemingly routine assignment to kill a guy named Ryan Madison in Los Angeles ends up leading Barry to discover an acting class overseen by Gene Cousineau (Henry Winkler) where he discovers his true passion...acting. Barry now wants to give up the life of an assassin-for-hire and pursue acting full-time. This is an idea that doesn't sit well with Fuches while the people that hired Barry for this Los Angeles job in the first place, led by gangster Goron Pazar (Glenn Fleshler), have their own ideas for what Barry's future should be. This basic premise is established in the first episode and had me curious how exactly the rest of the eight-episode long season would confront Barry's desire to leave the hitman life behind.

Would this season just follow Barry's development as a person be a straight line from "killer" to "normal guy" or would it go in a more complicated direction? Happily, the season follows the latter option to exceptional success. Watching Barry ebb and flow in response to newfound developments in his life is fascinating to watch, especially since his long-time emotional detachment from people means any newly reintroduced emotions in his life overwhelm his entire demeanor. For instance, instructions from Cousineau for Barry to take control of his life means Barry isn't just more assertive, no, he ends up going to Fuches at a golf course and just shouts at him for an extended period of time in one of the funniest scenes of the whole season.

Barry's journey to escape a life of killing is filled with those unexpected complexities that make it so much fun to me. Sometimes those complexities result in memorable bits of comedy, but oftentimes, especially in later episodes of the season, such complications instead create riveting drama. Perhaps the best of this drama emerges in Barry's seventh episode, Loud, Fast and Keep Going, which features a scene depicting Barry and former Marine buddy Chris in a car alone shortly after Chris was forced to kill someone. Chris is freaking out and wanting to go to the police about what just happened, something Barry knows will jeopardize his future. The whole scene has one on edge, not knowing what could happen next...and then Barry reaches for a gun and kills Chris right then and there.

It's a brutal moment that takes Barry into a darker place as a character, a guy who recognizes the evil in his murderous deeds but who constantly resorts to those very deeds as a go-to option to keep his life going the way he wants it to go. In that regard, he's evocative of Walter White from Breaking Bad a character that's been heavily imitated by numerous TV shows over the years to varying degrees of success. Barry feels like one of the few TV characters that actually evokes the artistic success of Walter White as a character by recognizing that a key component of what made Walter White work was understanding the character's thought process while also being terrified at the horrific things he'd do on a whim to keep himself free of consequences for his actions.

So many Walter White wannabe's fail to grasp that dichotomy, but Barry the show gets it and understanding how to pull that off makes its lead character fascinating to watch, especially since Bill Hader is excellent in the lead role. Hader's most beloved comedic characters like Stefon are well-known for their vocal affectations, so it's impressive how well he handles a role that, especially in earlier episodes, relies mostly on physical work with very little dialogue. Hader conveys a subdued sense of unease in his body language that immediately sends a chill down your spine and lets you know right away that something is off with this guy. As the season gets darker and darker, Hader proves to be more than capable of handling such material, especially in another harrowing sequence (which may be the best sequence from the entirety of Barry so far) from the shows seventh episode that has Barry breaking down as he thinks about Chris's wife getting the news of her husband's demise.

Hader is just unnerving in a highly mortifying sequence that's concluded by a well-executed joke courtesy of the program's supporting MVP Henry Winkler. God, Winkler is a delight in this show in so many ways, from the fact that he actually evokes the behavior of real-life acting teachers to the way he portrays his characters attempt at being a smooth ladies man, he's a total delight on this show. Numerous top-notch supporting performances also crop up throughout the season, with Stephen Root, Sarah Goldberg (whose storyline about sexual harassment in the four episode of the season is extremely well-done and might be one of the better depictions of that experience I've seen in recent pop culture, kudos to writer Sarah Solemani and director Maggie Carey for executing that plotline in such a thoughtful manner) and Anthony Carrigan as a chipper bald gangster being particular stand-outs.

Just as good as the all-around incredible cast is that, unlike many recent cable TV shows, Barry doesn't suffer from pacing issues. Each episode is only half-an-hour long and there are only eight episodes on the season, none of the bloat found in your typical thirteen-episode season of Netflix television will be found here. Even with a shorter per episode runtime than most "prestige programs", Barry still manages to deliver a tremendous amount of gripping drama and thoughtfully constructed character work that allows a great cast to constantly excel. This right here is a great example of combining talented artists with richly written material. Needless to say, all of that talent Bill Hader showed off in The Skeleton Twins is put to great use in the excellent first season of Barry.
Posted by Douglas Laman (NerdInTheBasement) at 1:18 PM