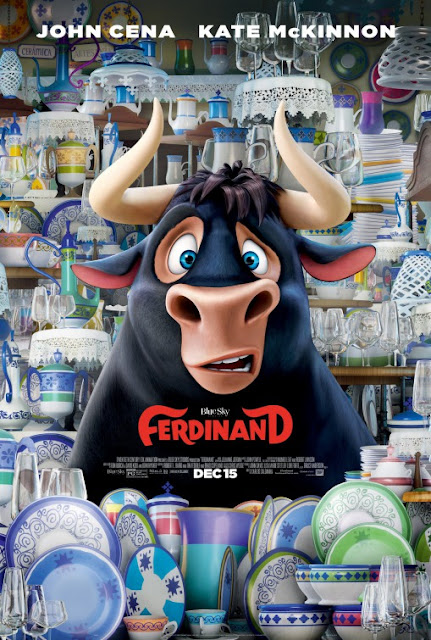 Blue Sky Studios has been producing animated movies for sixteen years now and they're currently occupying what one might call an awkward phase in their history. The studio's big cash cow, the Ice Age movies, has finally run out of gas and their second attempt to create a big franchise in Rio never really took off after puttering out after two movies. Meanwhile, they're still producing only one movie a year, far less than even PIXAR who've been able to do two movies a year twice now, and their recent films that aren't The Peanuts Movie have failed to really take hold of the general public. They also seem to be struggling creatively with recent films like Rio and Epic that aspire to be bold and unique but end up succumbing to some of the more conventional traits of modern-day American animated fare.


Another example of this trend of aiming high conceptually but coming up short in execution is Ferdinand, which hails from director Carlos Saldanha, a man who seems to be directly intertwined with Blue Sky Studio given that he's either directed or co-directed all but five of their twelve features. The story of Ferdinand revolves around a bull named (surprise surprise!) Ferdinand (John Cena) and just like in the children's book that this movie is adapted from, Ferdinand is a bull who does not want to do what all bulls are expected to: fight. Ferdinand is more content to smell flowers, spend time with his owner Nina (Lily Day) and spread kindness wherever he goes.


Those ambitions are put into jeopardy when he's taken away from Nina and taken to a ranch full of wacky bulls and a goat named Lupe (Kate McKinnon) where he's told he must fight if he wants to avoid being sent to a chophouse. Will Ferdinand be able to hold onto being true to himself in the face of these turmoils? In a happy surprise, Ferdinand as a movie does manage to stay true to the core spirit of its source material by ensuring that Ferdinand does, in fact, refuse to engage in any sort of acts of violence. This is a movie very much constantly in tune with the idea of Ferdinand as a pacifist and that's a refreshing change of pace considering how often adaptations of classic children's books eschew the themes of their source material for hollow attempts at being hip (just look at the live-action movie adaptations of Dr. Seuss books).

The best parts of Ferdinand are when both the character Ferdinand and his own movie directly engage with the idea of staying true to one's own personality instead of caving into the narrowly-defined conventions of society. Seeing Ferdinand assure another bull that it's OK to cry is legitimately touching while another separate scene of Ferdinand assuring another bull that he too can discover and pursue his own passion is similarly effective at pulling on one's heartstrings. Best of all though is a nearly dialogue-free climax where Ferdinand confronts a matador in front of a crowd at a Colosseum, a thoroughly well-done sequence that wraps up its story in a low-key intimate way that stands out from other recent animated fare.

Unfortunately, the biggest problem with Ferdinand is that it way too often engages in the worst traits of modern animated movies. Most notably, the story is way too overstuffed with comedic sidekicks voiced by an all-over-the-map collection of celebrity voice-overs. You've got a horde of wacky bulls, a trio of hedgehogs, another trio consisting of German horses, a rabbit prone to bouts of unconsciousness, there's just too many characters in here that seem to exist solely to ensure there's a bunch of celebrities in the cast (why is Peyton Manning in here?) These characters are all trying so hard to drum up laughs from the audience in such an obvious and tired manner that frequently consists of generic slapstick, shouting, mentions of butts and a portly hedgehog who can't stop saying how much he loves food because he's portly, don't you see.

While the jokes are more forgettable than painful, it's still a shame so much of Ferdinand is set aside for such rote instances of levity when its attempts at pathos are so successful. This is a film that needed to just trust its main characters plight would capture the viewers attention instead of overstuffing the film with hyperactive attempts at yuks. Ferdinand is also a film that needed to have more bold choices in its animation, the character designs, particularly on the human characters, are fairly generic. Like so much of Blue Sky Studios recent output, Ferdinand feels like it's torn between more distinctive creative ambitions and just reveling in the most tired stereotypes of modern American animated movies, but its virtues are promising enough to make me hope future Blue Sky Studios efforts are more consistent than Ferdinand.
Posted by Douglas Laman (NerdInTheBasement) at 11:45 AM