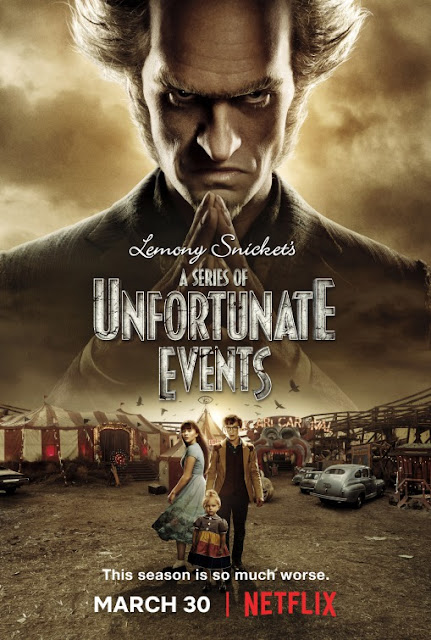 Heading into he ten-episode long season two of Series of Unfortunate Events, my big question for this TV show was how they would juggle the programs previously established heavily comedic tone with the darker books they were about to adapt. Just like Harry Potter, those Series of Unfortunate Events books got more complex and bleak as they went on and trying to merge that aesthetic with the joke-heavy Wes Anderson meets Tim Burton style of the show was gonna be a tricky proposition. Interestingly, having now seen the entire second season (which took me nearly two months to complete because I'm the worst binge watcher ever), I'm not sure if they did fully succeed in organically merging the two tones of these individual properties, but they did manage to make an entertaining second season nonetheless.

Like the first season, this new assortment of Series of Unfortunate Events episodes follow Violet (Maline Weissman), Klaus (Louis Hynes) and Sunny Baudelaire (Presley Smith) as they move around from one adoptive family to another while escaping the clutches of Count Olaf (Neil Patrick Harris) and also trying to deduce how their now deceased parents were connected to the letters V F D. Also carried over from the the first season is the structure of dedicating each single book to two episodes as well as the mythology surrounding V.F.D. (a secret organization) is given greater precedent than in the books, with this season heavily focusing on a V.F.D. agent named Jaq Snicket (Nathan Fillion) and his exploits tying into the Baudelaure children and Count Olaf himself.

I'd wager the whole season peaks early on with the pair of Austere Academy episodes thanks to a combination of heavily committed performances from Roger Bart and Kitana Turnbull, some wonderful dark humor and the best of Count Olaf's secret disguises. Exemplifying the phrase "It was the best of times, the worst of times", this pair of high-quality episodes is followed up with the weakest two episodes of the season in the adaptation of The Ersatz Elevator. Despite the presence of Tony Hale, the show struggles in these two episodes due to some sluggish writing and repetitive humor while an extraneous musical number for Count Olaf feels like quintessential filler material.

That's far from the only instance of the show having an issue of frequently feeling like it's just trying to stall for time to ensure it can stretch the books it's adapting to two 45-50 minute long episodes. This is probably the weakest aspect of the season, especially since the attempts to boost the runtimes of individual episodes usually involves V.F.D. worldbuilding that too often feels disconnected from the plight of the Baudelaire's. Even in the best and worst episodes of the season though (and, to be fair, I would say more episodes work here than don't), consistently strong work can be found in the production design and costume, the budgetary constraints of cable television have certainly not limited A Series of Unfortunate Events in these two departments.

The performances are also uniformly a stand-out element of the program, our three leads especially showing impressive control over depicting their characters reacting to various darker quandaries while an assortment of guest stars adapt with ease to the unique atmosphere of the program. I know Neil Patrick Harris as Count Olaf has been a controversial pick for this role that has divided fans of the books, but I've thoroughly enjoyed him throughout the shows run and he's able to make Olaf believable enough as a menacing presence as the season goes on. Patrick Warburton continues to be exemplary in a subdued role that stands out in his filmography as he channels Rod Sterling for his take on Lemony Snicket while the standout supporting turn of the season has to go to Matty Cardarople as Count Olaf's Henchperson of Indeterminate Gender, who scores some of the biggest laughs of the season.

Ah, laughs, there's plenty of those to be found in this new season of A Series of Unfortunate Events episodes, but I would say there's a tendency for this show to overdo the comedy, particularly in response to more serious moments. There's a handful of somber moments scattered throughout the season that are too quickly followed up by a gag or undercut even by a joke that feel like the show can't rein in its comedic tendencies long enough to allow moments of impact to have, well, an impact. This is especially notable as the season goes on and it tries to grapple with the darker tone of the books its adapting like The Hostile Hospital or The Carnivorous Carnival, though to be fair, there are a fair share of well-done instances of humor to be found in these later season two episodes. Here's hoping the inevitable third season irons out these tonal issues because A Series of Unfortunate Events is more often than not a most entertaining program with handsome production values and some devilish dark humor that makes it stand out among other modern-day kid-oriented TV programming.
Posted by Douglas Laman (NerdInTheBasement) at 2:50 PM